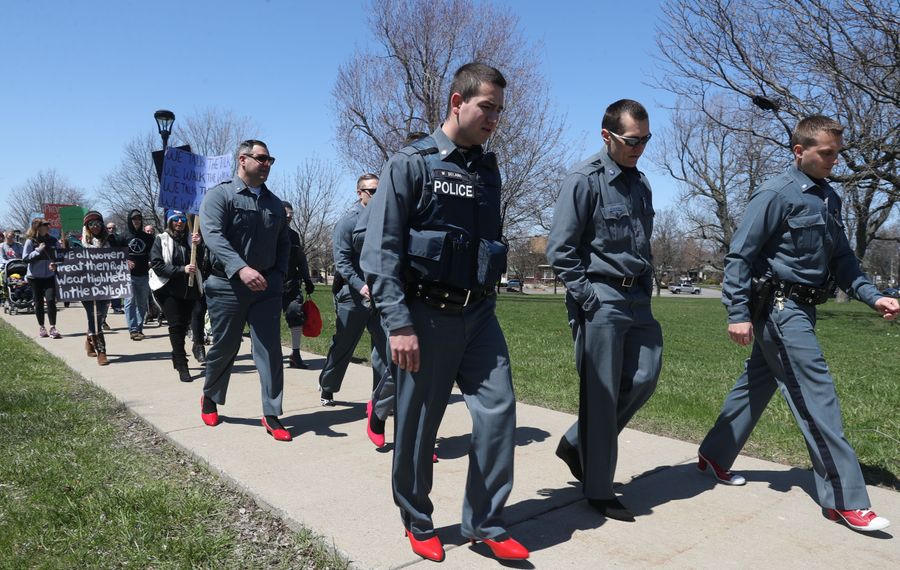 At 6-foot-6 inches, Nathan Tyrrell was already tall. But drop him into a pair of bright red, patent-leather size 15 pumps with 4-inch heels, and the man was a giant. A loud-clomping, weak-ankled, high-heel-scuffing giant.

By comparison, State Sen. Timothy Kennedy was having a much easier time of it. After his first walk in heels nearly five years ago – wearing too-large, blue-spiked pumps that left him blistered and bleeding – he took his wife's advice and bought a cushioned, 2 1/2-inch, size 12 sandal with a wider wedge base.

"And they're open toe, which is the real life-saver," said Kennedy, showing off his thick-strapped, black-rhinestone number on Sunday.

He also helped himself, with no nod to fashion, by wearing Band-Aids and socks. But it was still an uncomfortable procession around the University at Buffalo South Campus as he and other big-boned men happily donned women's footwear as part of the 13th annual Walk a Mile in Her Shoes event, dedicated to raising awareness about sexual assault and benefiting Crisis Services.

For some, this year's event held deeper meaning in light of the #MeToo and #TimesUp movements that have sent shock waves through the entertainment industry and high-profile companies over the past year.

Caitlin Powalski, director of the Advocate Program at Crisis Services, and CEO Jessica Pirro said the event has become part of a larger and more meaningful conversation about sexual assault.

UB student Emma Valvo, who interns with Crisis Services and works with UB's Sexual Violence Prevention Unit, pointed out that sexual assault against women and men is centuries old, but that victims have more avenues at their disposal to raise awareness and push a cultural shift toward no tolerance.

"Now, we have the power of social media to give voice to the voiceless," she said. "But we still need to do more."

About half a dozen UB Campus Police officers were sporting heels in bright colors Sunday beneath their conservative gray uniform slacks and holstered firearms. Officer Greg Fowler, 46, opted for a thick, cork-wedge sandal over the spike-heeled style.

When he finally got to change into his cushy, black uniform shoes, he said they'd never felt so good.

Tyrrell, meanwhile, spent much of the mile-long walk hobbling and scraping along in his 4-inch pumps, occasionally leaning on his girlfriend for support and even jogging a few steps at a time in hopes of finishing as quickly as possible. Onlookers chuckled and speculated about how sore his ankles were.

"Didn't think you'd make it," said one fellow-heeled walker at the end, shaking Tyrrell's hand. The 22-year-old UB business major was easy to track on the walk because of both his height and his loud, heel-destroying scrapes and clattering stomps down the sidewalk. By the time he was done, his heel tips were nothing but metal nubs.

He had picked out a hand-made sign to carry featuring an image of a brown mustache, appreciating its clever wording against sexual assault. The sign read, "You [mustache] me for consent." Shortly after the walk got underway, however, he had given the sign to his girlfriend to carry while he focused all his attention on walking in a straight line.

"Now he knows how it really feels," said Judy Park, who said Tyrell hadn't been that sympathetic a few days ago when she complained that her feet hurt.

Though the Walk a Mile in Her Shoes event is 13 years old and part of a nationwide campaign, local participation this year seemed a little down from past years, though snowflakes in the early morning hours gave way to sunny skies and temperatures in the mid-40s for the one-mile walk around campus. Crisis Services staff said about 150 people registered for the event this year.

Organizers urged everyone to post to Twitter and other social media using @WalkAMile_Buf or #WalkAMile_Buf to prolong the afternoon event into a longer-lasting campaign. Crisis Services, which addresses roughly 900 cases of domestic violence and 300 cases of sexual violence a year, also used the opportunity to promote its 24-hour hotline, 834-3131.

Tom Gibbons, senior investigator with the Campus Police Special Victims Unit, said he has worked with hundreds of sexual assault victims over the years, ranging from young children to senior citizens.