They often don't realize all those roads toward freedom led to very few places. One of them – a major destination on the Underground Railroad – was Niagara Falls.

"There is no other place like Niagara Falls," said Seth Frankel, principal at Studio Tectonic in Boulder, Colo., who led the design team for the Heritage Center. "This is the narrow end of the funnel, which is where all the turbulence happens."

On the streets of Niagara Falls from the 1840s to the mid-1860s, both hope and fear ran high. Bounty-hunters peered into faces, seeking someone they could kidnap for a reward.

"All that tension comes alive here in ways it doesn't in other places," said Frankel. Or, as Zach Mosley, exhibit designer and project manager with Studio Tectonic, said, echoing the name of the center's exhibit, "There's just one more river to cross, but it's terrifying."

Across the deep gorge and turbulent river, freedom beckoned, tantalizingly visible. While some people were shepherded across by Harriet Tubman and other traveling Underground Railroad conductors, a local group, mostly lost to history, played a vital part.

The corps of waiters at the Cataract House lived double lives as table servers and rescuers who defied the law to fight bounty-hunters in the streets and secretly usher people to freedom.

"These Cataract House waiters worked, lived and died here, and some of them are buried in Oakwood Cemetery," said Bill Bradberry, president and chairman of the Niagara Falls Underground Railroad Heritage Commission, who has lobbied for a heritage center for decades. "These are our people and this is our story."

The story will be told in sounds, sight and story in the center, built in the 1863 Custom House that stands next to the modern Niagara Falls Amtrak Station. 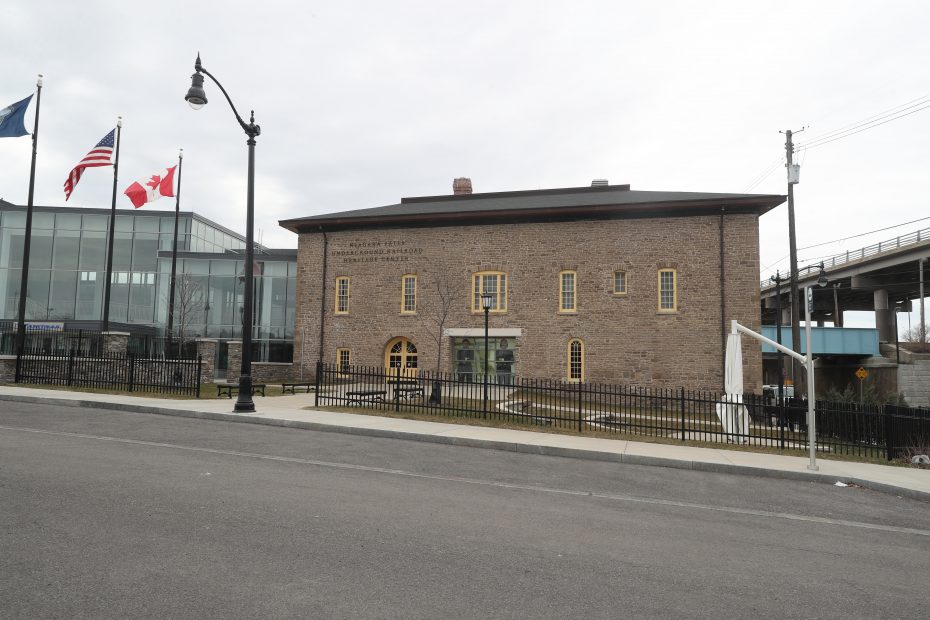 At 2,000 square feet, the center is compact. Ally Spongr, director and curator of the center, estimates that it will take people about an hour to experience it.

It is designed to be an intense and immersive experience, with visitors stepping directly from the ticket desk into an Arrival Gallery, just as tourists to Niagara Falls stepped off the train more than 150 years ago.

"This is an experiential museum," said Bradberry. "We want you to be immersed, to see it, feel it, touch it and hear it. When you hear those sounds — the little bell, the horses' hooves, the clinking of dishes — you feel as if you were there."

Stories are told through a dozen "watercolor videos" painted by E.B. Lewis, a Caldecott Award-winning children's book illustrator, who has illustrated 75 books.

Lewis said he was excited to be asked to do the illustrations for the historically accurate stories. "It's like a dream project for an artist."

The stories, he said, are "like mini-books, but instead of being in between two covers, they are under a roof and you experience them by walking in."

"Our job was to bring the characters to life and have visitors connect with them emotionally," said Sara Smith, producer and project manager for the Richard Lewis Media Group in Boston. The ambient sound, including the Mahalia Jackson spiritual "I'm On My Way to Caanan Land," helps set the emotional scene.

The details, all documented in research done by historian Judith Wellman and historian and author Karolyn Smardz Frost, are so harrowing that "to see them done this way, if you're not moved, you must be nailed down," said Lewis.

The center's five galleries flow into each other. One is a replica of the Cataract House dining room, in which the top of a table, created to match those shown in a photo of the room, serves as a screen to illustrate the waiters' stylish dinner service.

"This helps us imagine the waiters coming through with military precision," said Spongr. And, as Bradberry often notes, they were "serving Southern hotel guests while they are sneaking the freedom-seekers out the back door."

One story is told about an anonymous young woman brought north by the Evans family. Sent downstairs to the Cataract House kitchen to get milk for the family's baby, she was spirited to Canada. 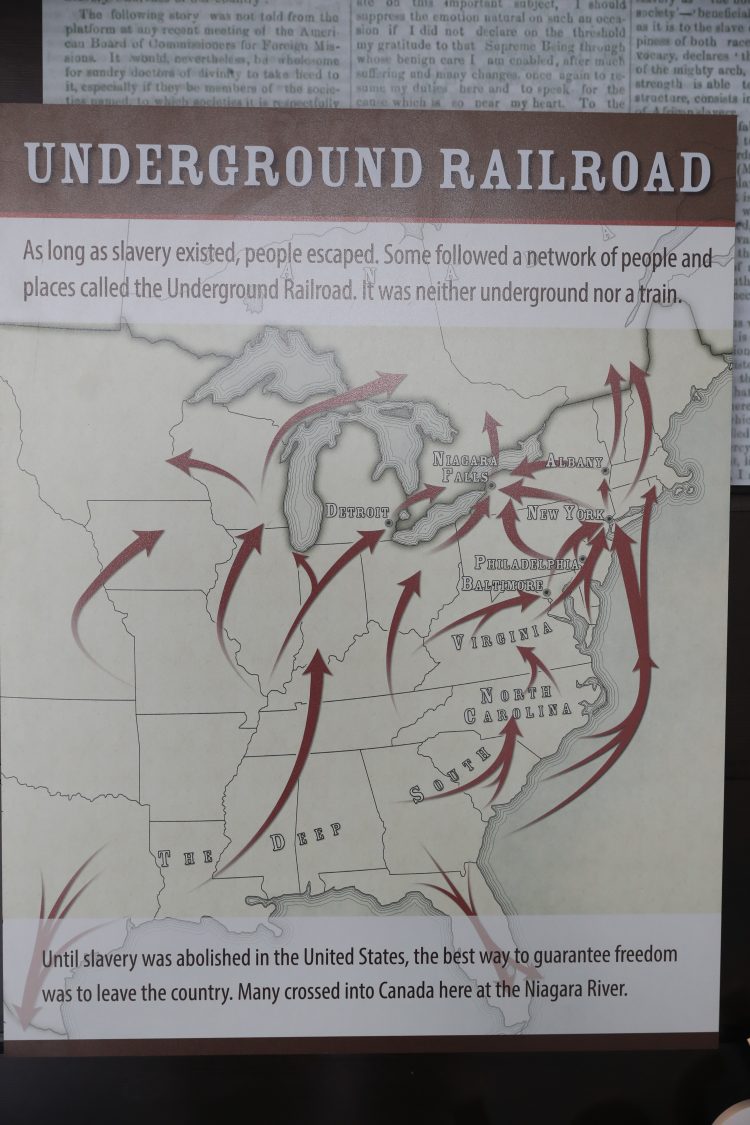 Images from the registration book of the Cataract House allow visitors to click on signatures and learn more about those people, who range from Abraham Lincoln to Buffalo bounty hunter J.K. Tyler, whose attempt to arrest waiter Patrick Sneed in 1853 was thwarted by his fellow Cataract House waiters.

While some of the signatures were already known, others, such as Tyler's, were discovered by Wellman, Spongr and Christine Bacon, program and interpretation specialist at the Heritage Center. "They were actually paging through the registry and discovering things, and you'd think it was the Fourth of July for the celebration," said Bradberry.

The realistic Cataract House facade and furnishings, as well as a re-creation of the Suspension Bridge in the Crossing Gallery, were made by workers led by Tessa Meier, scenic artist from Universal Services Associates. From the shading on the stucco front of the Cataract House to massive beams and view from the Suspension Bridge, the galleries are packed with realistic detail.

While Spongr said the final cost of the center had not been tallied, the approximate capital expense of building the exhibitions has reached $1.7 million. Funding came from the tribal-state compact revenue account, she said.

Bacon is particularly proud of a simple display on legal geography that enables visitors to press a button and see how legal documents of the day affected people.

"We were trying to help visitors understand that these dry legal documents impacted how people could live their lives. These documents were the difference between freedom and slavery, between life and death," said Bacon.

"It looks very simple," said Bradberry, "but trust me, Christine did an awful lot of research and a lot of work to break the concepts down so we can understand."

In the Escape Gallery and the Crossing Gallery, visitors will learn some of the ways freedom seekers made their escapes, then cross a replica of the Suspension Bridge complete with a marked border between freedom and slavery at the international crossing line.

The final gallery is a mosaic image of freedom stories and videos, including some of modern people who fled to freedom. In this gallery, "We really try to get the visitor to think about their own lives and connect in their own way," said Spongr. "Images are throughout time, ranging from John Brown to images of the 1970s by Milton Rogovin. They show that freedom is a constant struggle."

Throughout the center, arrows with quotes about freedom sit above the historic scenes. From "Make a start for Canada, the land of the free," to "The arc of the moral universe is long but it bends toward justice," the quotes set the tone for the history unfolding below.

The stories, said Spongr, "were always told from the point of view of the freedom-seeker, or the waiters, or any of the black Americans of the time, so it's not coming from the oppressor or the traditional narrative that we are so used to hearing."

It's easy, she said, to focus on Parkhurst Whitney, who owned the Cataract House and did not interfere with his waiters' abolitionist activities, but it's harder to tell the story of the little-known and sometimes anonymous freedom seekers and Underground Railroad conductors.

To tell their stories "takes more research, and it takes being thoughtful and understanding of how we bring the stories to light that have been kept in the dark for so long," said Spongr.

"This is American history, and we should embrace it as such," said Lewis. "It's an ugly smudge and scar, but it's still there. If you are going to move forward, you have to address it, deal with it, bring it to light, and learn from it, and that's what this is about." 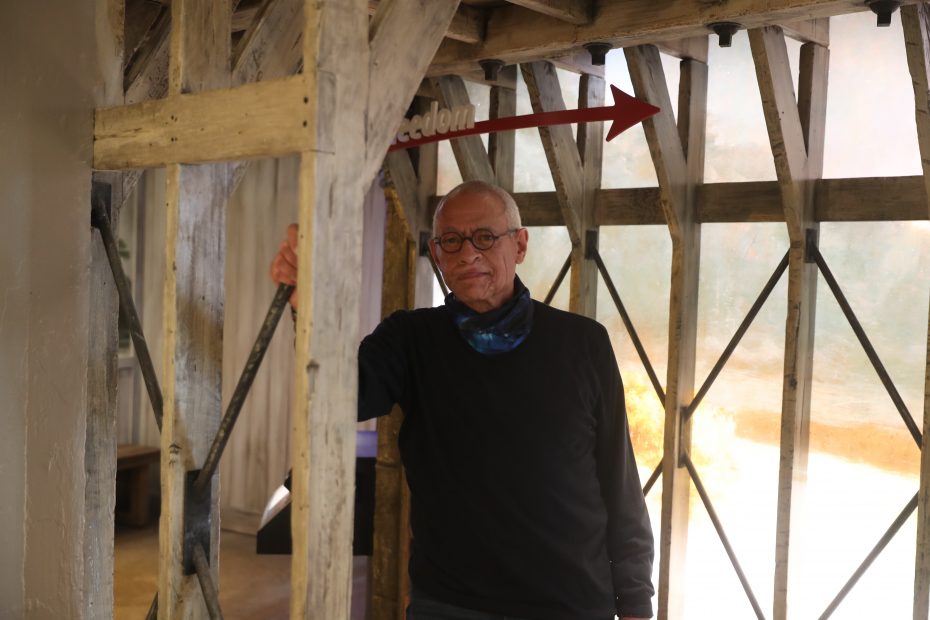 The Heritage Center opens with a weekend of activities, ranging from a black tie dinner to a free Community Day.

After a ribbon-cutting by dignitaries set for 11 a.m. May 4, an Opening Night Celebration will run from 4 to 9 p.m. Guests may take a self-guided walk through the museum and enjoy beverages and small bites. Music will be provided by Buffalo Brass Machine and jazz trombonist Wycliffe Gordon. Tickets are $20.

The Opening Gala will start at 5:30 p.m. May 5. Dinner will be served, and the program will include a talk by Alan Spears, cultural resources director at the National Parks Conservation Association, and a musical performance by jazz singer Drea d’Nur. Black tie is optional. Tickets are $75.

On May 6, local people will be welcome to walk through the heritage center for free between 10 a.m. and 6 p.m. as part of Community Day. A limited number of timed tickets are available and must be reserved in advance. Musicians from the Buffalo Colored Musicians Club and the George Scott Big Band will entertain.

Admission is $10 for adults; $8 for students 13 and up, including college students with ID; $6 for youth ages 6 to 12; and free for those 5 and under. Group rates are available by emailing tours@niagarafallsundergroundrailroad.org.