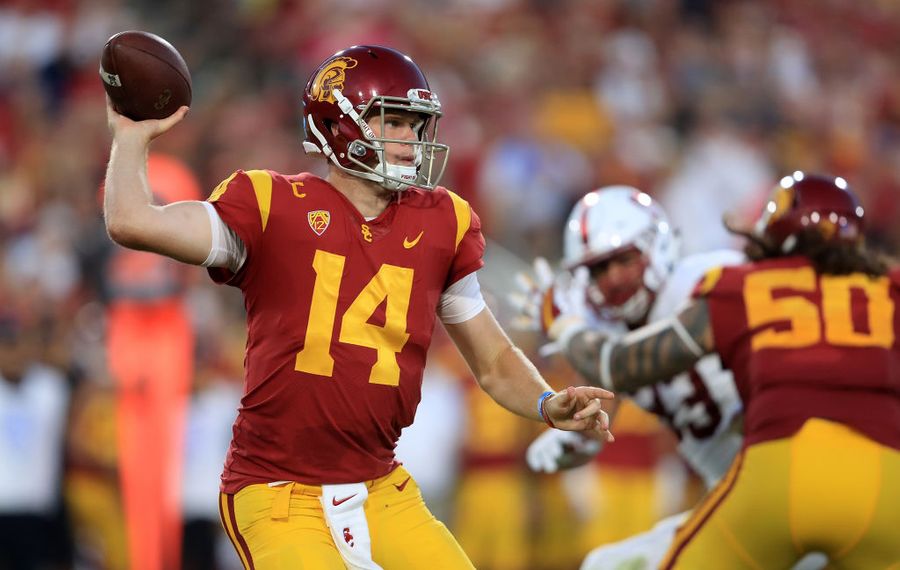 The big draft news in the AFC East is all about quarterbacks. The Jets and the Bills got their franchise guys. The Dolphins and Patriots decided they did not need to bolster their QB rosters in any significant way.

The 2018 draft could mark the beginning of the end of New England's dominance of the AFC East if either the Jets' Sam Darnold or the Bills' Josh Allen live up to their selection at the top of the draft. If both flop, then the AFC East probably is a one or two-team division for the next five years.

Here's a review of how the Bills' competition fared on draft weekend:

New York Jets: Credit the Jets with making a great trade with Indianapolis six weeks before the draft. The aggressive move to move up from No. 6 to No. 3 netted Southern Cal's Darnold, which nobody foresaw when the deal was made on March 17. Most thought the Jets were targeting Baker Mayfield at No. 3. They had to be thrilled to get Darnold, a huge talent but no sure thing. The Jets gave the Colts two picks in the sweet second round (37 and 49) plus a second-rounder in 2019. So what? Just like the Bills (who gave up 53 and 56 to get their QB), it's a small price if the QB is great.

In the third round, New York filled a big need with Canadian DT Nathan Sheppard. The Jets' defense has lost disgruntled big-uglies Sheldon Richardson and Muhammad Wilkerson in the past year. Sheppard isn't as talented as either of those two but should be a solid addition.

The Jets entered the draft in need of offensive weapons. The Jets' skill-position roster is near the bottom of the league. The only addition was athletic tight end Chris Herndon from Miami in the fourth round.

Miami Dolphins: Both owner Stephen Ross and coach Adam Gase have insisted since January that the Dolphins remain all-in on QB Ryan Tannehill, who has suffered knee injuries the past two seasons and remains an uncertainty. He turns 30 in July. Miami probably could not have passed on UCLA QB Josh Rosen if he lasted to No. 11. But Arizona vaulted the Fish and took Rosen at No. 10. Miami got great value at 11 in Alabama safety Minkah Fitzpatrick, a near sure thing. He will be a big upgrade over T.J. McDonald, who disappointed last season after Miami gave him $10 million guaranteed on a four-year deal.

Miami also got a good tight end who should contribute immediately in Penn State's Mike Gesicki in the second round. That filled a huge need. Miami picked Gesicki over small-schooler Dallas Goedert. Good move. Gesicki is more explosive. He fills a big need, and Gase will know how to get him the ball.

Coverage linebacker was the next huge need for Miami, and the Dolphins got burned a little in the third round when BYU's Fred Warner (who the Bills liked) went at No. 70 to the 49ers. Miami, picking 73rd, opted for Ohio State's Jerome Baker. He's smaller than Warner but he's fluid, fast (4.53) and rangy. He probably takes over for Kiko Alonso, who struggled at  linebacker. Can Baker hold up against the run? That's the question.

In the fourth round, Miami got a steal at running back with Arizona State's Kalen Ballage, a downhill runner who has come of Alvin Kamara's receiving ability. Miami added blocking tight end Durham Smythe of Notre Dame in the fourth round, too. If Tannehill and the line stay healthy, Miami's offense will be good. Miami filled needs rather than investing in a young QB. Once again, it's near future hinges on Tannehill.

New England Patriots: Bill Belichick was wheeling and dealing with eight trades, a draft-weekend record for him. The Pats wound up getting at least three immediate-need contributors to help the soon-to-be 41-year-old Tom Brady.

New England's top need was left tackle after the loss of Nate Solder in free agency. Isaiah Wynn, picked No. 23, played guard for Georgia in 2016 and left tackle in 2017. Because of his height (6-2 3/8), many viewed him as an NFL guard. It will be no surprise if he beats out LaDarian Waddle to be the Pats' left tackle. Shaq Mason becomes a free agent after 2018. Wynn could take over for him in a year.

The pick of Georgia running back Sony Michel at No. 31 was a bit of a surprise since Belichick has been shopping at Walmart for running backs (with phenomenal success) for a decade. Yet the value in the draft at No. 31 was on offense, not defense. Anyone who watched the bowl season knows Michel is dynamite. He will be a fantasy football darling and it will surprise no one if he's this year's Alvin Kamara, a receiving stud out of the backfield. Third-round pick Duke Dawson (No. 56) of Florida fills a huge need at nickel corner. He might be the best in the draft in that role.

Belichick got a prototypical Patriot slot receiver in the seventh round in 5-9 Braxton Berrios of Miami. Belichick himself scouted the Hurricanes' pro day. He returns punts, too, cut from the Wes Welker mold. Danny Amendola is gone, Chris Hogan is in the last year of his deal, and Julian Edelman is soon to be 31. Berrios is a perfect fit.

Belichick passed on the 2018 QB class, despite speculation he would pounce on Lamar Jackson or Kyle Lauletta. Seventh-rounder Danny Etling is No. 2 material, at best.

As usual, Belichick is the draft master. He turned the No. 43 he got for Jimmy Garoppolo into some extra juice that allowed him to move up and get Dawson, a No. 4 and a No. 2 in 2019. The Pats also added a No. 3 in 2019. Drafting Brady's successor will have to wait 'till next year.

Brandon Beane: Josh Allen will start at Bills' No. 3 quarterback

Jerry Sullivan: Josh Allen has to grow, on and off field