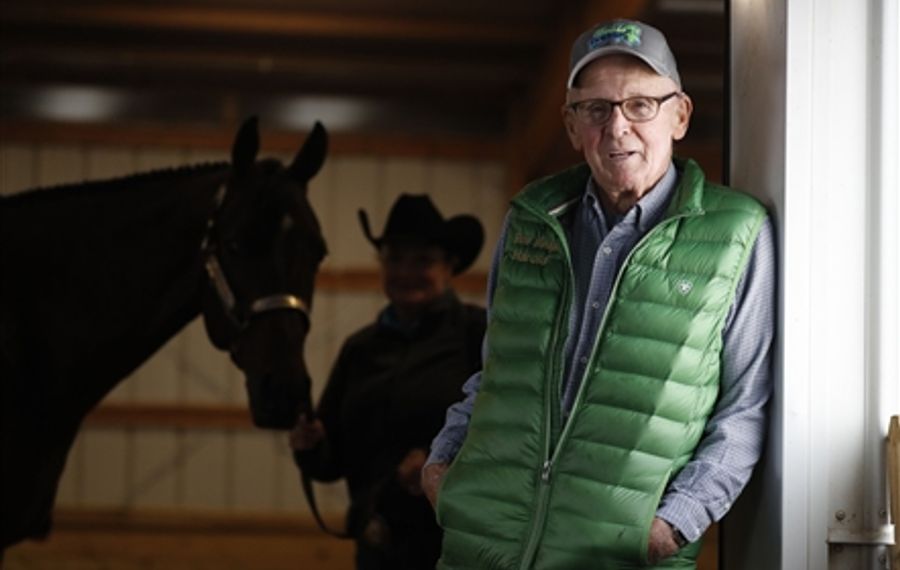 You might find Harold Frey, of Clarence, checking out the barns at night, making sure the show horses are bedded down.

Or Frey, 84, could be fishing on Lake Erie, and he likes hunting, too.

If you're looking for someone to roast a pig or a half side of beef, the Clarence Center volunteer firefighter is your man.

Or he could be standing in the show ring, making sure the rails for jumps at the Spring Fling Quarter Horse Show on the Erie County Fairgrounds this weekend are set up properly. That's something he has done for 44 years, and counting.

Frey manages about 20 horse shows a year. He started in the 1970s, when he opened his own 80-by-200-foot barn in Clarence to play polo after another barn stopped hosting matches. Then he started having horse shows there every month.

It seems to be working.

"We love being here," said Melissa Shetler, who runs Circle M Training Center in Saegertown, Pa. "You always see him walking around."

She said Frey succeeds because he is accommodating, friendly and makes things work. Frey and Randy Czelusta of Newfane, who is studying to be a certified show manager, even drove out last summer to give Shetler's barn a pig roast – courtesy of Frey and Czelusta.

The Spring Fling runs in two five-day sessions, and attracted about 200 horses each session this month from New York, Ontario, Ohio, Pennsylvania and Connecticut. Frey said the American Quarter Horse Association estimates three people attend shows for each horse, and a show the size of the Spring Fling could generate $750,000 to $1 million in revenue.

Frey, a retired plumbing and heating contractor who said he has been married "64 years to the same girl" – that would be Beth – got his introduction to horses working on his grandfather's Clarence Center dairy farm, when he rode the work horses.

"That was the big thing, to go to Grandpa's on Sunday and ride," he said.

Only one of his five children shared his affinity for horses. Russell Frey was a well-known trainer and rider when he died unexpectedly two years ago when he was putting tack on his horse in Chicago. He was 56. His father developed a hunter derby with jumps as a memorial to Russell at the horse shows.

Harold Frey also was a Republican committeeman for 53 years, and a member of the Clarence Planning Board for 26 years.

Asked to explain his attraction to horses, the grandfather of nine, standing outside the Showplex, wearing jeans, plaid shirt and a John Deere vest, shrugged.

"It gets your blood going, gets your adrenaline going, especially when you're jumping fences," he said.

Frey's success in managing horse shows is an outgrowth of his quiet way with people. He said that comes with experience.

"I've heard every story in the book, even used a few of them myself," he said.

"Harold is one of the most energetic, engaging people. Just never stops," said JoAnne Paxon of Clarence, who is the announcer for the show.

She said Frey has a lot of knowledge and wisdom that he's willing to give newcomers.

"His life has been all about promoting the quarter horse and supporting Western New York," Paxon said.