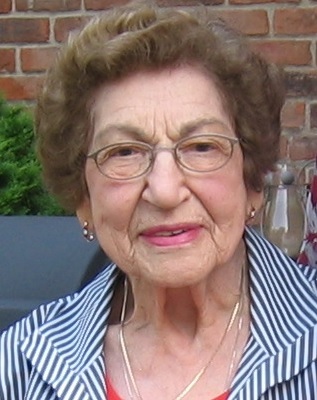 Josephine A. Giglia, a retired librarian for Mount St. Joseph Catholic Elementary School, died Wednesday at her home in the Evergreen Retirement Community in Cincinnati, Ohio, following a brief illness.

Born in Buffalo, the former Josephine Pantano grew up on the West Side, where she graduated from Grover Cleveland High School. She served as an executive secretary for the U.S. Air Corps during World War II from 1939 until her marriage in 1946.

Mrs. Giglia was a parent volunteer in the library of Medaille Elementary School in 1968, reading to the children. In the 1980s, when she was in her 60s, she resumed her education to get a certificate in library science from Villa Maria College.  She subsequently became the librarian for the re-named Mount St. Joseph Elementary School and worked there until her retirement in 1994.

She was a Eucharistic minister for more than 20 years in Christ the King Church in Snyder. She enjoyed gourmet cooking and baking - her fancy cookies were well known among friends - and was an avid reader, especially of children's books.

A long-time resident of Snyder, Mrs. Giglia moved to Cincinnati in 2009 to be closer to family.

She is survived by a daughter: Therese M.; a son, Joseph S., and three grandchildren.

A funeral service will be held at 9:30 a.m. Monday in  Christ the King Church, 30 Lamarck Drive, Amherst.