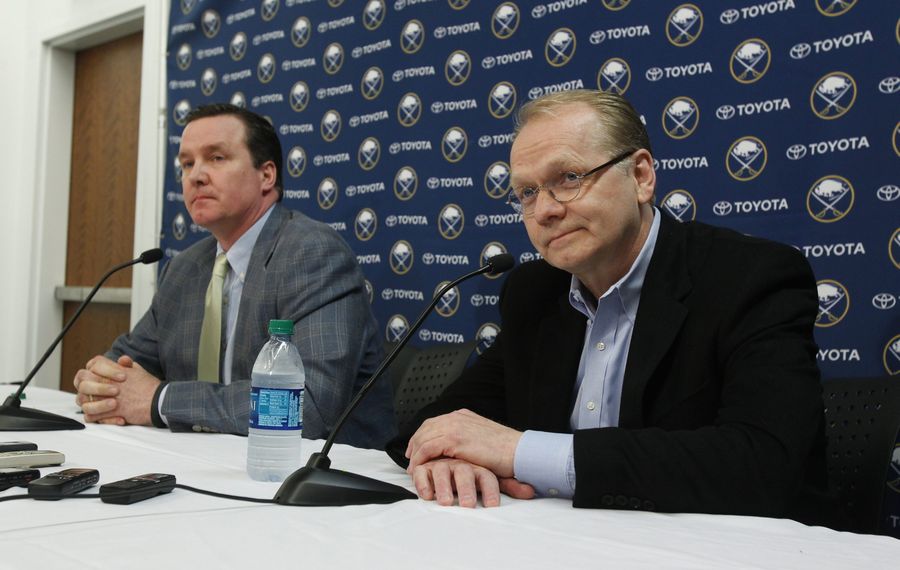 It was the day Darcy Regier repeated a word and launched an era.

The former Buffalo Sabres general manager has never been so right.

Verbal volleyball between Black and the media featured words such as callous, insensitive, defamatory, lie, disingenuous, hostile, inflammatory and ridiculous. Regier trumped everyone.

Here's a look back at the day that set the stage for losing.

Although the opening question wondered why Regier was still GM and the second went to Regier regarding then-interim coach Ron Rolston, the GM was merely among the bystanders for the opening 16 minutes of the spectacle.

Black sparred with Scott Brown of Channel 2 and The Buffalo News' Mike Harrington and Jerry Sullivan regarding ticket costs, owner Terry Pegula's finances, a price hike that was announced on Fan Appreciation Night, taking customers for granted, media bias, drilling oil wells and a specter of bankruptcy. The hostility was off the charts.

A question then went to both Black and Regier. Channel 2's Adam Benigni asked Black to elaborate on keeping Regier and asked Regier to elaborate on the vision for the Sabres, which Black earlier described as a "rebuild, reboot, revamp – whatever 're' word we are comfortable using."

"Why don't we go the other way around?" said a frustrated Black. "I need a break."

Regier, with an understanding nod, took over. Here is his answer in its entirety.

"I would say, Adam, that the vision is probably started last season at the trade deadline, where we began to move in a direction of both in recognition that we were going to have to and still have to acquire more top players," Regier said. "I think it began to become clear – and Terry's been very consistent with this – this is about building for a Stanley Cup, not a playoff run, not two playoff runs. You want to do it in a process that will allow for being successful in winning a Stanley Cup in the shortest period of time.

"There are some obvious ways you can do it. You can go to the bottom of the league for five years and hope you can come across a Crosby, a Malkin and miss on a couple guys. Toews, Kane, five years, you can do it that way. Or you can try and see if there's room in between so as not to create that length of timeline. The trade at the deadline with Paul Gaustad began in some ways that process. We utilized free agency, albeit the free-agent pool is not what it once was. It probably won't be again like it once was going forward, and it becomes less probable that you're going to be able to do it that way.

Inside the Sabres: Moulson, Leino duke it out for title of worst contract

"So it is going to be first and foremost about the draft. It's going to be the supplementation of the drafted players with free agents, with trades, but the trades go back to the draft again, and even with teams like L.A. and the acquisition of Carter and Richards, they used a third overall pick in Jack Johnson, they used a fifth overall pick in the case of Brayden Schenn going the other way to acquire those players. So you need the top picks. You need the top players, which more often than not require the top picks.

"And again, the distinction is it's not about the playoffs. It's about a Stanley Cup, which certainly involves the playoffs, and I'm not going to lighten that. It probably needs an understanding from our fan base that what Terry is asking us and is certainly a big part of communicating, working – I know he's not here today, but I can tell you the communication is almost on a daily basis – he wants to try a lot of things. We have tried some things. Some things have worked better than others. Some things have not worked very well. He is in search of creating a Stanley Cup championship. That has not changed. In fact, it has been reinforced. It is stronger than ever. It may require some suffering. It may require some suffering.

"What we did at the deadline by moving Robyn Regehr, Jordan Leopold, Jason Pominville is part of that process. We are going to have four picks in the top 55. We currently have the eighth overall. We currently have the 16th overall. We have the 38th, and we have the 55th. We will do everything we can to acquire those top players that are required to win a Stanley Cup. And if it lengthens the time line – hopefully, it doesn't – but that could be one of the possibilities."

The Tank had arrived in Buffalo.

Black returned to spotlight, receiving and lobbing verbal grenades. (He later apologized to Harrington and Sullivan.) John Wawrow of the Associated Press then asked Regier about getting an opportunity – "Some people may say one too many opportunities" – to remain as GM.

After Regier said he was grateful and believed in himself, he went back to the Sabres' plan for a Cup.

"I understand what we're talking about here," Regier said. "I understand our fan base, and I would like to think that people will give up some suffering in order to win a Stanley Cup. I'm willing to do it. I believe our fan base is willing to do it. We certainly don't want to extend it for a long period of time. We're going to make it as short as possible, and that's the goal."

"Just a follow-up because suffering has been mentioned several times today," said Wawrow.

"Some can say Sabres fans have gone through enough suffering going back to bankruptcy and beyond that," Wawrow said.

"I guess the follow-up," said Wawrow, "would be how much suffering is enough?"

More suffering, Darcy? Are you kidding?

"Not every franchise is willing to do that. So you satisfy yourselves and your fan base with a playoff. But you have to do more than that if you're set on winning a championship."

The Tank set a course for the bottom of the NHL and the top of the draft.

"When you’re talking about suffering in terms of the rebuild, it sounds like you're asking for patience," Russo said. "Is that a fair thing to say?"

Inside the Sabres: 'Next Chapter' is scary story

"So along those lines about patience," said Stepner, "are we looking at and are fans looking at a building of a championship team process like the Penguins went through, like you mentioned Chicago went through, where you gather those assets that are younger, you are at the bottom of the league. Not that you're saying you're planning on being at the bottom of the league …"

"But going that route," Stepner continued, "can fans expect that short term?"

"Fans should expect that we will acquire top players and enough top players to contend and win a Stanley Cup," Regier said. "The hope is that involves the shortest time frame possible. The teams that you talked about in the case of Chicago and Pittsburgh and L.A., but L.A. is a little bit of a different situation, required patience. It did.

"But it's a shift from a playoff round or making the playoffs to having bigger plans, bigger goals, bigger, you know, going for it all. And Terry's made that decision. That's what he wants to do. That's what he's going to do, and it's a shift because generally in the National Hockey League how you keep your job, how you keep fans happy is by getting in the playoffs, by playing a round. It's not the happiest. It's not the saddest, but it's a level. It's an acceptable level. It's an acceptable standard around the league. It's just not the standard here. And I recognize I'm saying that in light of two missed playoffs. I realize that."

"It is not my vision personally," Regier interjected. "It's a team. This is a team thing."

The team vision rolled on with Pegula and without Regier, who was fired seven months later. Seven is also the number of seasons without playoffs in Buffalo. That's why of the more than 7,000 words that were said five years ago, one lingers.

Complete audio of the news conference