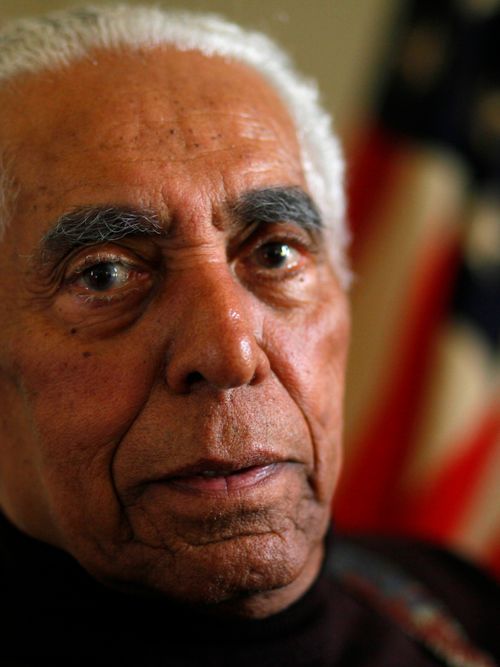 Frank B. Mesiah, who died Friday at Buffalo General Medical Center at the age of 89, stepped to the forefront of the fight against racial discrimination in Buffalo after hearing a talk by Malcolm X in the early 1960s.

That wasn't why he went to hear Malcolm X speak, though. As only the 13th African-American to wear a Buffalo police uniform, then-Officer Mesiah was assigned to go undercover to check out a speech by the Black Muslim leader on East Utica Street.

“It was like a whole new awareness, a real awakening to discrimination,” Mr. Mesiah told Buffalo News reporter Tom Buckham in 1986. “Malcolm helped me look at what was going on everywhere. ... It was like you’re trying to put out all these fires, and suddenly you look up and see what’s causing them.”

Mr. Mesiah already had been facing up to racism for the better part of a decade, beginning with his challenge to blockbusting real estate agents in his Humboldt Parkway neighborhood. He squelched it by organizing a letter-writing campaign.

“White realtors would pull up to a house and knock on the door pretending they were looking for someone else,” he said in 1997 and an event honoring him for his community service upon his retirement. “Then they would tell them blacks are moving in down the street. They would panic whites to sell their house for less than it was worth.”

His next major battle – a protest of the location for the former Woodlawn Junior High School because it perpetuated racial separation – was unsuccessful, but it laid the groundwork for his biggest battle, the lawsuit that led to Judge John T. Curtin’s ruling to integrate the Buffalo schools.

Until then, Buffalo schools were little different from schools in the South, he told News reporter Robert McCarthy in 2016.

“Black kids went to one school and white kids to another school,” he said. “And there were no black teachers.”

He joined with other black and white residents to wage the campaign through the Citizens Council on Human Relations, which tackled a number of discrimination issues. In the beginning, he received bomb threats by phone and death threats to his family.

“What they did was give me energy,” he said in 1997. “To have that many people upset at me, I thrived on that. I figured I must be doing something.”

He went on to push for a downtown campus for Erie County College, to eliminate school dropouts, to open Buffalo police and firefighter positions to minorities, and to include African-Americans, women and other groups in planning the area’s economic future.

During the past year, Mr. Mesiah campaigned to make Buffalonians aware of President Millard Fillmore's "role in maintaining slavery" by signing the Fugitive Slave Act in 1850. Fillmore was from Western New York.

"He was a quiet leader, until he had something to say," Buffalo Common Council President Darius G. Pridgen said Saturday. "That type of leadership will be missed. There's not many people who can live through some of the most segregated times and yet not become bitter. But he just wanted the world, he wanted the country to be better, especially Western New York."

Born in Buffalo, Mr. Mesiah grew up on the West Side, attended School 77 and graduated in 1946 from Grover Cleveland High School.

"It's truly a great loss," said former Common Council President George K. Arthur, who first knew Mr. Mesiah as a star football player at Grover Cleveland. "The community -- not only the black community, but the Buffalo community at-large -- has lost one of its real pillars."

Mr. Mesiah's first jobs were as a laborer at Bethlehem Steel and as a janitor and later a machine operator in the Chevrolet engine plant in the Town of Tonawanda.

He served in the Army, attaining the rank of sergeant first class, and became a Buffalo police patrolman in 1954, serving for 13 years.

He became a sixth-grade teacher in the Buffalo schools before becoming media coordinator and assistant director of school integration. He also served as president of the Black Educators Association.

Mr. Mesiah went on to become an educational planner with Erie 1 BOCES and then took a position with the State Department of Labor, handling discrimination cases for 20 years. He was regional administrator of the Office of Affirmative Action Programs when he retired.

He also was a part-time instructor in the Sociology Department at Canisius College and the Cornell University Buffalo Labor Studies Program, teaching Managing Diversity, Sexual Harassment Prevention and other courses.

Mr. Mesiah advocated for the concerns of the black community from many platforms, most prominently as president of the Buffalo Branch NAACP, a post he held for 20 years before stepping down in 2016. He also served as vice president of the New York State NAACP.

In a statement Saturday, Buffalo Mayor Byron W. Brown said, "My prayers & condolences are with the family of Frank Mesiah, who served the community for more than two decades as President of the Buffalo NAACP. The positive impact he made on the city of Buffalo will never be forgotten."

He hosted a biweekly hour-long radio show, “The NAACP Speaks,” on WUFO for many years and helped arrange a special appearance by renowned soprano Kathleen Battle with the Buffalo Philharmonic Orchestra.

In 1976, he challenged incumbent State Sen. Joseph A. Tauriello in the Democratic primary, losing by fewer than 1,500 votes.

Gov. Mario Cuomo named him to his Advisory Committee on Black Affairs in 1985. He was appointed to the Buffalo Fiscal Stability Authority, the city's financial control board, in 2009.

He was project director of the Black American Museum & Cultural Center in Niagara Falls and a board member of BlueCross BlueShield of Western New York, Erie County Medical Center, the YMCA of Greater Buffalo, the Parkside Community Association, the Legal Aid Bureau of Buffalo, the Buffalo FBI office’s Citizens Academy Foundation and the Erie County Industrial Development Agency.

Also a board member of the Buffalo and Erie County Historical Society, he chaired the committee that mounted an exhibit on notable black aviators. He received the society’s Red Jacket Award for community service in 2002.

His portrait appears on the Freedom Wall at Michigan Avenue and East Ferry Street.

Mr. Mesiah met his wife, Ulrica A. “Rica” Caldwell, a reading teacher in the Buffalo schools, by chance when she was attending Buffalo State. Needing a ride home from a picnic, she asked his sister for a lift. When the car arrived, Mr. Mesiah was behind the wheel. They were married in 1950. She died on Dec. 17.

For his skill in street badminton, he earned the nickname "Champ" from the neighborhood kids, many of whom he would later help register to vote, said his daughter, Francesca.

"He always said that we've come a long way but there's an awful lot of work still to be done," she said. "He would recognize the accomplishments, but he always said 'There's still work to be done.'"