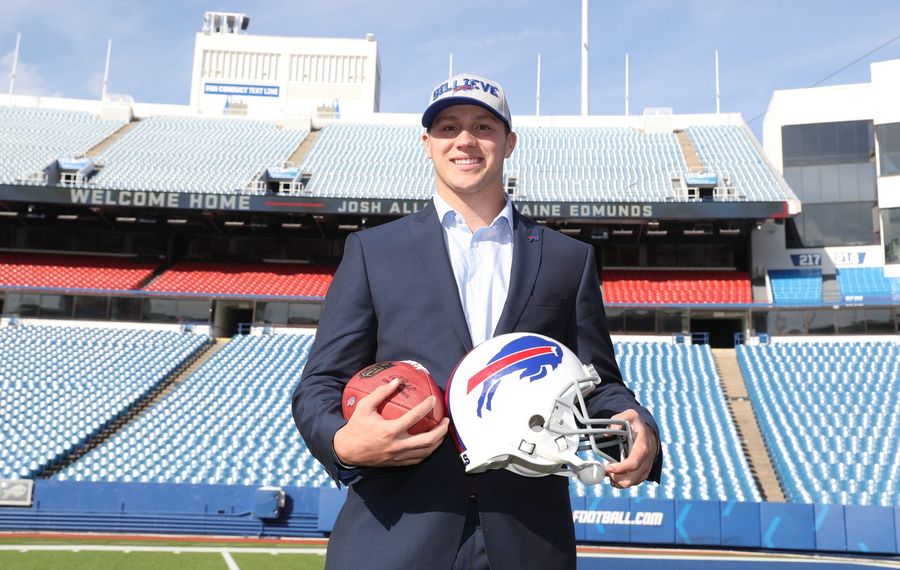 Like it or not, the Josh Allen era has officially begun in Buffalo.

Opinions about the Bills’ big move to get Allen Thursday night ranged across the ideological spectrum. CBS gave the pick a grade of A+. Allen’s coach compared him to Carson Wentz. But by every commonly used trade calculator, the Bills vastly overpaid when they swapped with Tampa Bay to move to No. 7 and take the Wyoming product. And when asked if he cared about the negative reaction from some fans toward the pick, Buffalo general manager Brandon Beane was direct: No.

As for Allen himself, he advised Bills fans to look at his film rather than his statistics.

Age not a concern: Edmunds’ father, former Pro Bowler Ferrell Edmunds, said there’s no need to worry that the Bills’ new linebacker is so young.

Kelly welcomes Allen: Allen will hope to become the Bills’ best quarterback since Jim Kelly, who welcomed Buffalo’s newest signal caller on Instagram. Another Bills legend, Andre Reed, met Allen before the draft and said the quarterback is “very ready to go.”

Beane, McDermott on Allen, Edmunds: See what the Bills’ brain trust said about the team’s two first-round picks. And watch Allen’s awesome reaction when Buffalo traded up for Edmunds.

Speaking for themselves: Allen and Edmunds met with the media upon arriving in Buffalo

Speaking of the Edmunds trade: Buffalo’s deal with Baltimore to move up and grab Edmunds was graded as more even than the Allen trade with the Buccaneers.

The linebacker’s nickname: At Virginia Tech, Edmunds was known as “The Eraser.” Here’s why that’s good news.

Watch: Buffalo News sports reporters discuss the Bills’ first-round choices. Allen has some growing to do, on and off the field, Jerry Sullivan writes.

Listen: In the Daily Drive Podcast, Paul Peck and Kevin Sylvester from Buffalo Sports Page said the Bills achieved their goals in the first round of the draft.

The draft goes on: It’s not over yet. The Buffalo News’ Mark Gaughan writes that the Bills still have a lot of work to do on Day Three of the NFL Draft Saturday.