NFL teams can go years without picking a player from the lower level of Division I football.

On Saturday, the Buffalo Bills did that twice on the final day of the 2018 NFL Draft.

The additions of Weber State cornerback Teron Johnson in the fourth round and Jacksonville State (Ala.) safety Siran Neal gave the Bills some depth in the secondary. After the draft was over, General Manager Brandon Beane said it was merely coincidence, and not some advanced level of scouting, that led the Bills to take two players from the Football Championship Subdivision – something the organization hadn't done since choosing receiver Dez Lewis out of Central Arkansas in the seventh round in 2015.

"We do try to make sure we turn over every stone, but it wasn’t a target to go get those guys," Beane said. "We spent time with those guys ... but it's just the way it fell."

Johnson was chosen with the 121st overall selection, a pick announced by Hall of Fame running back Thurman Thomas at the brink of Niagara Falls.

Johnson, who won the 2017 Big Sky Defensive Player of the Year, recorded 49 tackles, three interceptions and 12 passes defensed in being named a unanimous FCS first-team All-American.

He became just the fourth player in program history to receive a Senior Bowl invite. He is the highest player drafted in school history since Paul McQuistan was selected in the third round (69th overall) in 2006.

A 5-foot-11, 192-pounder, Johnson will get an opportunity to win the Bills' nickel cornerback job, a position that remains open after the team did not re-sign Leonard Johnson (who remains a free agent).

"That’s where he’ll go first," McDermott said. "He’s played inside, he’s played outside as well. He does offer that flexibility, the versatility of playing inside and outside. He’s tough. He tackles, which seems like it’s a lost art for a lot of DBs – corners in particular – in this league, so that’s something that we look for. Had an opportunity to be around him a little bit at the Senior Bowl and was impressed by what he did down there during the week, so I thought that was an important get for us."

Johnson said he would frequently shadow receivers with the Wildcats, which meant playing inside or outside.

“Most of the time if I was following a receiver, that's most of the time when I would go on the inside. At the Senior Bowl, I played a lot of nickel as well, just to show that I could be pretty versatile,” Johnson said. “Whatever spot is open for the Bills, I'm excited to work hard and compete for it.”

Johnson was projected to be a fifth- or sixth-round draft pick by nfl.com. Scouts, Inc. had him rate as the 143rd-best prospect in the draft.

“I kind of thought it would be early on the third day,” Johnson said. “About where I am right now.”

Landing in Buffalo, however, was a surprise. Asked how much contact he had with the Bills leading up to the draft, Johnson said “none until about 20 minutes ago. They just called and told me. It was out of the blue, but I was really excited when I got the call.”

Johnson is familiar with the Bills’ first two picks. He played in the Senior Bowl with Wyoming quarterback Josh Allen, and trained for the draft at EXOS in Pensacola, Fla., with Virginia Tech linebacker Tremaine Edmunds.

Even though he comes from a smaller school, Johnson doesn't see it as a disadvantage.

Johnson ran a 4.5-second 40-yard dash at the NFL Scouting Combine and did 17 repetitions on the 225-pound bench press. A former wide receiver at Sheldon High School in Sacramento, he moved to cornerback during his true freshman season, starting five games and making 31 tackles, one interception and nine passes defensed in 2014.  He finished his career as Weber State’s career leader with 42 passes defensed, and also made 172 tackles and six interceptions.

“I feel like it's definitely one of my strong suits,” he said of tackling. “I try to play corner more like a safety, if you will. I try to be as aggressive as possible. That's something I'm looking forward to doing in the NFL.”

Johnson said he’ll come to Buffalo with his father, Baron.

“He’s been there for me my whole entire life,” Johnson said. “My mom passed away when I was younger, so he’s just been playing both roles. He’s been a great supporter, and definitely helped me get to where I am.”

Johnson’s mother, Trina, died when he was 9 from breast cancer.

“I really didn’t understand what happened at that time,” Johnson told the Sacramento Bee. “I was really shocked. I definitely miss her a lot. It was a long time ago. I try to remember her. I ask my dad and my sister about her to get a better memory. I can feel her, though.”

The family was together Saturday when Johnson took the call from the Bills.

“It’s kind of surreal at this point,” he said. “It hasn’t really hit me yet. I’m just excited to have this opportunity.”

Neal is only the 13th player from Jacksonville State to be drafted by the NFL and the second by the Bills (tight end Keith McKeller was the first in 1987). He started all 24 games in his final two seasons with the Gamecocks. 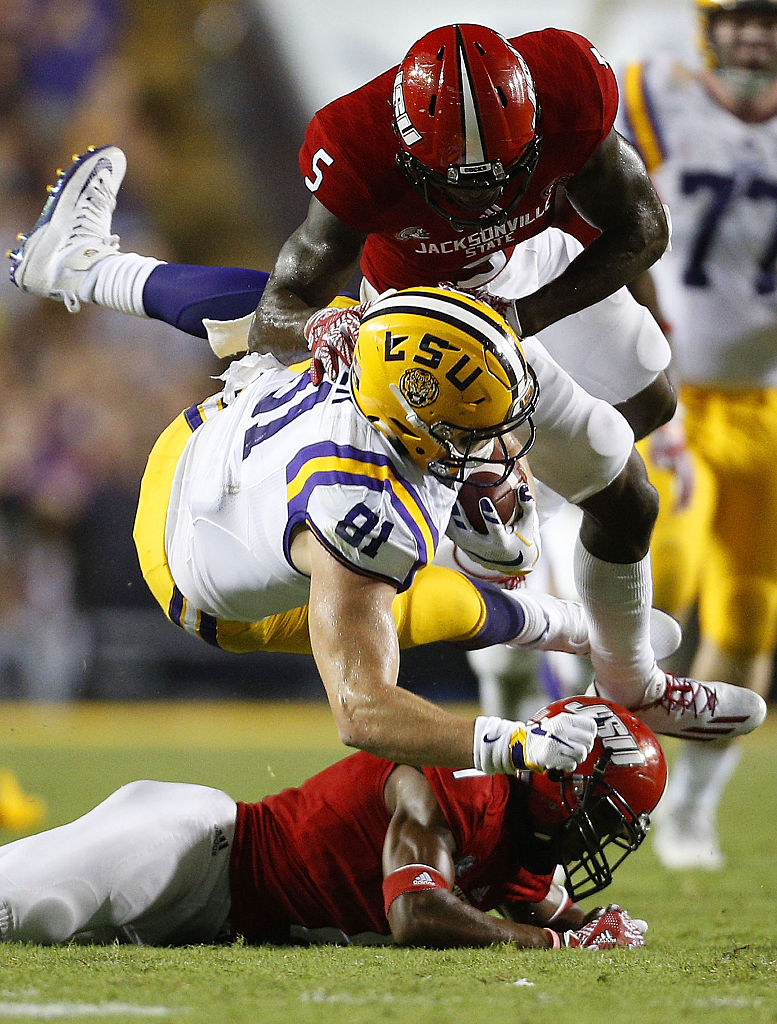 Colin Jeter #81 of the LSU Tigers is tackled by Siran Neal #5 of the Jacksonville State Gamecocks during the second half of a game at Tiger Stadium on September 10, 2016 in Baton Rouge, Louisiana. (Photo by Jonathan Bachman/Getty Images)

He played linebacker, safety and cornerback at times for the Gamecocks.

"It’s an interesting combination, really," McDermott said. "You hear combinations of safety and linebacker, or sometimes corner and safety, but very few encompass all three … so he offers the flexibility. We’re going to get him in here in a couple weeks and see where we want to put him first.

"He’s a guy who will obviously help us as well on special teams. He’s a highly competitive young man that’s extremely driven as well. When we were at the Senior Bowl, he was a guy early on in the process for me at least that stood out from an intangibles standpoint. An extremely driven and hungry young man."

If Neal does end up at safety, he'll provide depth behind starters Micah Hyde and Jordan Poyer

"I talked with (Bills assistant defensive backs) coach (Bobby) Babich and he said he really liked how I fit inside the run game, attacked the run," Neal said during a conference call with reporters. "He liked how I played my one-on-ones as a big guy. I really can't say exactly where I'll be fitting in, but wherever they lead me, just come in and compete and be part of that team. That's what I'm looking for."