Legislation that would stop requiring schools to use state tests for evaluating teachers was introduced this week, and arguably the largest ovation came in Buffalo.

That’s where the bill was read to hundreds of teachers from across the state in town this weekend for its annual convention of union delegates and presidents.

“It was just a moment of elation,” said Andy Pallotta, president of the New York State United Teachers.

“We had 500 union presidents in the room. Everybody stood up when we read the bill, and what it does, and applauded,” Pallotta said. “They were applauding an end to a broken system that has really been a morale killer for the schools.”

Passage of the legislation would be a big victory for the state’s powerful teachers union that has fought to eliminate the use of student scores on state assessments to evaluate teacher performance.

Just a few years ago, Gov. Andrew Cuomo pushed for tougher teacher evaluations that allowed state test scores to be used for as much as half of a teacher’s rating.

Now, the governor is talking with education leaders.

“We have been working with the Legislature and education community for months to address this issue and would like to reach a resolution this session, but it depends on the overall political environment,” said Richard Azzopardi, Cuomo’s spokesman.

The bill, proposed by the Democratic majority in the Assembly and sponsored by Assemblywoman Catherine Nolan, of Long Island, would eliminate the state mandate requiring the use of state assessments to determine a teacher or principal’s performance.

Instead, school districts and teachers would be allowed to negotiate their own evaluation systems.

Assemblyman Sean Ryan, a Buffalo Democrat, said he expects the bill to come up this week in the Committee on Education, where he has a seat, before it’s taken up for a vote on the floor of the Assembly.

Math and ELA scores are on a roller coaster in New York. Here's why.

The bigger question, though, is whether it will pass in the Republican-controlled Senate to become law.

“I think it’s got a very good chance of passing,” Ryan said.

Ryan thinks there’s widespread recognition that there’s no one-size-fits all for teacher evaluations and that this exercise undergone by the state has largely turned out to be a failed experiment.

Gallivan, a member of the Senate’s Education Committee, expected recommendations from the state Education Department prior to enacting legislation, but nonetheless believes it’s “worthy of discussion.”

“I think there will be discussion in the Senate, because it’s recognized this has been a source of problems,” Gallivan said.

“The current law, in my view, is insufficient and does need to be changed,” Gallivan said. “To what exactly, I don’t know.”

Using student scores on the grade 3 to 8 math and reading tests in teacher evaluations sparked a huge controversy among teachers and parents across New York and helped fuel the opt-out movement.

State officials ultimately backed off and in late 2015 the state’s Board of Regents placed a four-year moratorium on using the state assessments for teacher evaluations – calming the outcry for  now.

That moratorium runs though the 2018-19 school year.

“Frankly, there was a draft of the bill that was circulating earlier in the week and that was very problematic,” said Robert N. Lowry Jr., the organization’s deputy director. “This is an improvement upon that, but we’re still evaluating it and trying to understand the implications.”

Cuomo’s involvement also has led to criticism from his opponent in the Democratic primary, Cynthia Nixon, who has called for the repeal of the teacher evaluation system the governor once championed.

Meanwhile, teacher delegates who showed up to Buffalo Niagara Convention Center this weekend for its annual Representative Assembly were optimistic about the latest developments in the Assembly.

Teachers will be lobbying their state senators non-stop until the end of session, Pallotta said. 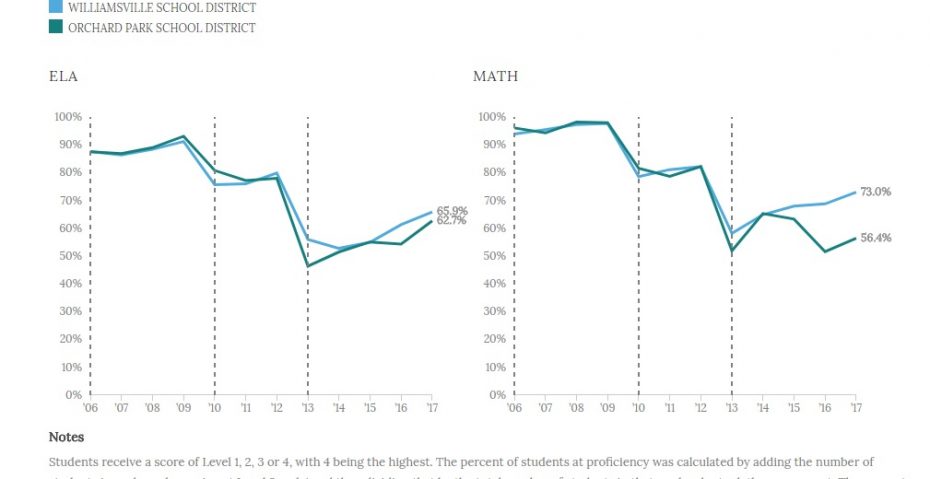 Graph shows variations in student performance at Williamsville and Orchard Park as proficiency benchmarks were changed.

The frustrating part for teachers is that the state several years ago raised the benchmarks on the state assessments, resulting in a significant drop in the percentage of children deemed proficient in ELA and math, said Peter Stuhlmiller, president of the Kenmore Teachers Association.

“When you use that same tool and you apply it to teacher performance, now it’s a double hit,” Stuhlmiller said. “It’s not fair to our kids and it’s certainly not fair professionally for the classroom teacher.”

Students, meanwhile, are spending a significant amount of time taking tests under the guise of trying to improve a teacher evaluation system that’s not working, said Michelle Licht, president of the Williamsville Teachers’ Association.

“This is great for our teachers, but it’s also a huge first step for our kids in trying to release them from some of the confines of our testing structure,” Licht said.

“We’ve been waiting for it for a long time,” she said of the legislation.