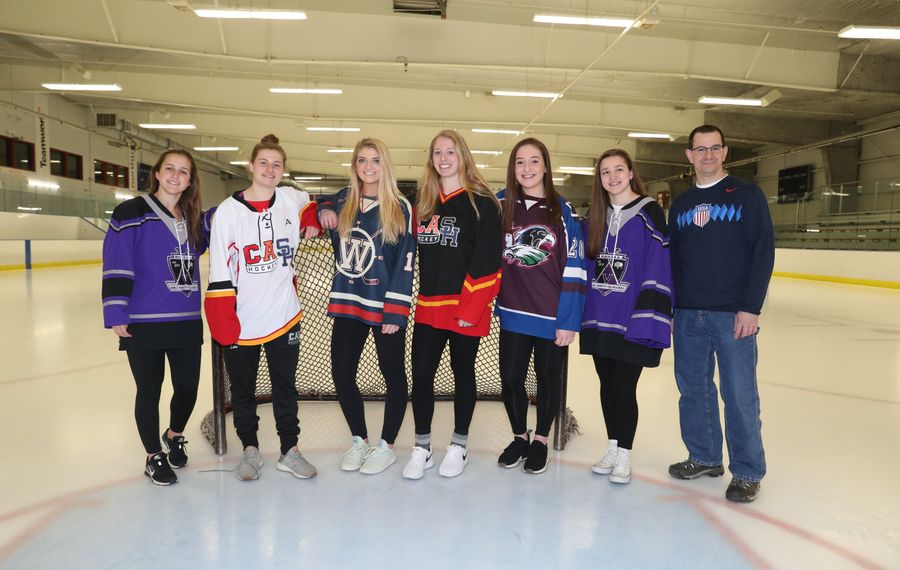 That was the one title out of three FLOP didn't win last year in Bob Klimowicz's first season behind the bench, which goes in the books as an unquestioned success.

But in securing the one that got away, did the program attain some satisfaction?

While winning states felt great, the hunger remained for FLOP. The famished feeling went away for good Feb. 25 at HarborCenter.

FLOP's season to remember became one for the record books that day. The team completed the postseason championship trifecta by winning the Western New York Varsity Hockey Federation playoff championship. FLOP earned it by defeating Clarence/Amherst/Sweet Home in the final.

In so doing that, FLOP became the first Fed public schools team to win the Section VI, state and Federation playoff tournament championships in the same season.

"There was a little pressure on us in the Federation game but it was just a great experience and something these girls will remember for the rest of their lives," said Klimowicz of the 3-1 title-game win over Clarence/Amherst/Sweet Home. "It was obviously quite the season, realizing the impact you might have on the community. You realize how many people follow the program. You realize you accomplished something nobody else accomplished."

Kenmore/Grand Island and FLOP were the only teams to have won the Section and Federation championships in the same season prior to this year.

After winning the state title via 4-1 score over Salmon River at Oswego, FLOP beat Williamsville in the Federation semifinal to give itself a chance at history.

"One win away from trifecta last year, we constantly emphasized that we couldn't rest on that state championship," Klimowicz said. "We wanted to win all three and we had such a great group of leadership that they made it happen."

"We had 19 captains. Everybody treated everybody with respect. I didn't name captains this year. … Everybody does their part."

FLOP, which returned several key players from last season, proved to be quite stingy on defense and productive on the attack. Defenseman and Providence-commit Brooke Becker led the team in goals (19) and ranked second in points (28). Gabby DeMeo (10 goals, 22 points) and Sirena Fitzery also made it tough on opposing forwards to do anything in the zone.

Emily Kromer led the offense with a team-high 31 points and also scored 12 goals. Kromer's sister Mary had a solid season playing a two-way game. FLOP rotated its goalies more this season, with Maggie Spyche getting the call during sectionals and states. Victoria Cottrell got the nod between the pipes during the Federation playoffs, yielding a total of four goals in two games. Last year, Cottrell got the starts in sectionals and states while Spyche played in the Fed playoff games.

Spyche went 10-0-1 this season and has compiled a 22-1-2 mark with a .919 save percentage the past two seasons. She and Cottrell are both juniors.

Becker, a sophomore, was the only FLOP player to earn a spot on this year's All-Federation First Team. She's also the only repeat first-team selection from last year.

Dave Santoro of Lancaster/Iroquois/Depew received Coach of the Year honors after guiding LID to a 7-10-1 record. That's a six-win improvement from the 2016-17 season.