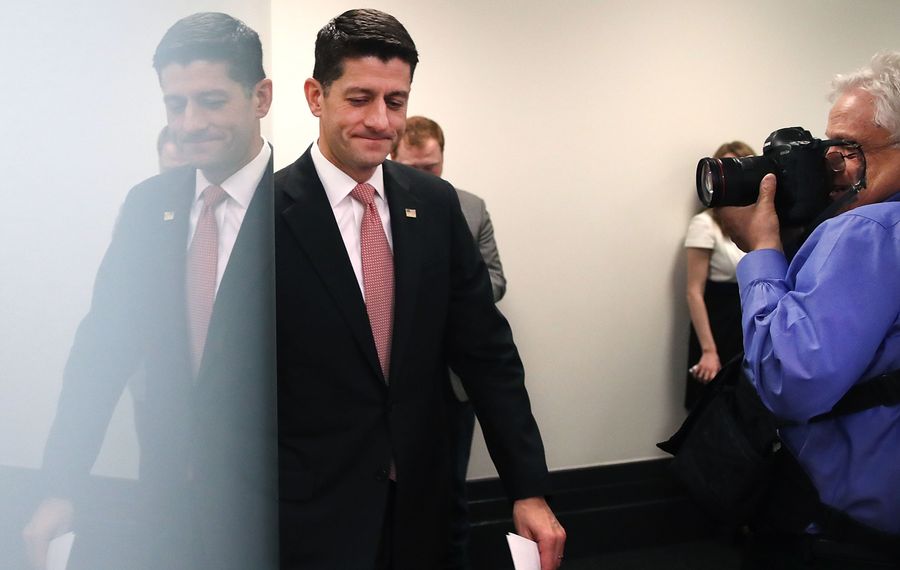 WASHINGTON - House Speaker Paul Ryan, R-Wis., sought Friday to defend his dismissal of the House chaplain, a decision that has roiled the chamber in recent days, with some members of both parties questioning his motives.

At a closed-door meeting of House Republicans on Friday morning, Ryan said he had received a couple of complaints about the Rev. Patrick Conroy and thought replacing the Catholic priest was in the best interest of the institution, according to those in the room.

Ryan also told colleagues that the dismissal was not motivated by Conroy’s political views or a prayer that the Jesuit gave in November on the House floor that stirred controversy when the chamber was debating a tax bill.

“He said it was absolutely not political,” said Rep. Bill Johnson, R-Ohio, describing Ryan’s remarks after leaving the meeting. He declined to comment further on the issue.
Rep. Bradley Byrne, R-Ala., said Ryan told members “that there were concerns expressed to him, the speaker, from a large number of members that their pastoral needs were not being met by Father Conroy.”

Conroy’s departure was announced early last week, but the issue has blown up in recent days as members have learned that he is not leaving voluntarily but at the request of Ryan.
Rep. Peter King, R-N.Y., who stood up in Friday’s meeting to ask Ryan for an explanation, said afterward that he was not satisified with the speaker’s response.

“I’ve seen no evidence that he should have been removed,” King said. “To me it was not a satisfactory answer.”

Entering the House chamber for votes Friday, House Minority Leader Nancy Pelosi, D-Calif., declined to address her discussion with Ryan about the dismissal, putting the onus on him.
“You’ll have to ask the speaker about the chaplain. But it’s really a sad state of affairs,” she said.

As chaplain, Conroy’s public role is to offer the opening prayer each day the House is in session - but whose private role, far more importantly, is to serve as pastoral counsel to the entire community on the House side of the Capitol.

In an interview with The New York Times, Conroy said he did not know whether politics were behind his departure, but he pointed to a prayer he had given on the House floor in November, when Congress was debating tax overhaul legislation.

In the prayer, Conroy asked that lawmakers “guarantee that there are not winners and losers under new tax laws, but benefits balanced and shared by all Americans.”

About a week later, Conroy told the Times, he heard from the speaker’s office. “A staffer came down and said, We are upset with this prayer; you are getting too political,” he said.

Shortly after, when he saw Ryan himself, Conroy said that the speaker told him, “Padre, you just got to stay out of politics.”

“Well, I still don’t understand why he was asked to leave,” said Rep. Frank LoBiondo, R-N.J., citing several possible reasons that might placate his anger at the decision. “I have gotten to know him pretty well, and I didn’t understand it.”

Democrats also questioned the move, including Rep. Keith Ellison, D-Minn., a Muslim, who voiced concerns on Twitter on Friday.

“I’m very sorry Father Conroy was forced to resign as a House Chaplain,” Ellison wrote. “He is a good man. No explanation and no consultation.”

Ryan made no mention of the reasons behind Conroy’s ouster in an April 16 announcement, in which he called him “a great source of strength and support to our community” and said the priest is “deeply admired by members and staff.”

The issue has split Ryan and Pelosi, who according to a senior aide, disagreed with the decision and told Ryan that she had heard only good things about Conroy.

Ryan’s office disputed that Pelosi opposed the decision, suggesting that Ryan would not have taken the action if Pelosi fully objected.

“While it was the speaker’s decision, she and her office were fully read in, and did not object,” AshLee Strong, Ryan’s spokeswoman, said in a statement.

In his letter of resignation, Conroy made clear that he was leaving at Ryan’s request.

“As you have requested, I hereby offer my resignation as the 60th chaplain of the United States House of Representatives,” Conroy wrote to Ryan on April 16.

“I have seen it as a blessing and I have considered it one of the great privileges of my life,” he added.

Conroy is just the second Catholic priest to serve as House chaplain, following the Rev. Daniel P. Coughlin, who was chosen for the post in 2000 after a months-long protest by Catholic lawmakers. In late 1999, a bipartisan committee had recommended a different priest for the post, but the Republican leaders at the time chose a Presbyterian minister instead. After a protracted fight, Coughlin was chosen for the post, making history as the first Catholic chaplain.

Boehner, Pelosi and Ryan are all Catholic.

After consulting with Ryan’s staff, Conroy set May 24 as his last day in office. At Wednesday’s House GOP caucus, Ryan announced that Rep. Douglas Collins, R-Ga., would lead a bipartisan committee to recommend a replacement for Conroy.

Sensitivities began to escalate as lawmakers talked about the type of replacement needed for Conroy. Rep. Mark Walker, R-N.C., part of the group searching for the next chaplain, suggested someone “that has adult children, that kind of can connect with the bulk” of lawmakers and the problems they face with children who “made some bad decisions” or a spouse upset about the legislative schedule.

“Having someone who’s walked in those shoes, I think, allows you to immediately relate a little bit more than others,” Walker told reporters.

That outraged some Catholics, who felt Walker was eliminating Catholic priests from consideration because of their vows of celibacy. “Evidently that would mean that no Catholic priest ever apply again to be a chaplain of the House of Representatives, if that’s a standard,” said Rep. Joseph Crowley, D-N.Y., a Catholic who had two uncles who were priests.

On Friday, Walker said that celibacy is not a disqualification for pastor but that “there are some members who had some issues reaching out to Conroy.

The chaplain, he said, should be “someone who has the instincts to go to someone who is hurting not just waiting for someone to come to them.”

Reps. Gerald Connolly , D-Va., and Walter Jones, R-N.C., are circulating a letter to Ryan that will ask for an explanation, trying to gain signatures from both parties and from all denominations.
“Is this a content judgment? We have no answers,” said Connolly, also a Catholic. “The House deserves better than that.”

The Washington Post’s Erica Werner and Sean Sullivan contributed to this report.