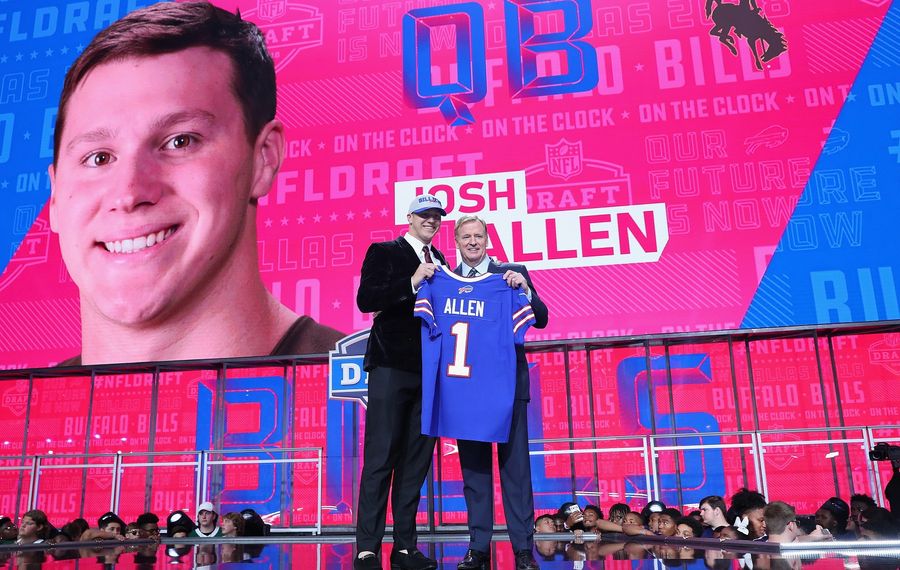 The NFL Draft was the local TV event of the month.

The combined ratings for the coverage of the NFL draft by ESPN, NFL Network and Fox illustrate that Western New York was extremely interested in what the Buffalo Bills were going to do with their two first-round picks.

Here are is a Top 12 list from this dial-switcher of the most interesting things heard or seen on those channels and in local coverage at 11 p.m. after the Bills selected Wyoming quarterback Josh Allen in the first round after making a deal with Tampa Bay to move up to seventh.

To put the 21.9 rating in perspective, the comedy "Roseanne" was considered a mega-hit after its two-episode premiere had a 15.2 local rating.

ESPN led the way in WNY with a 9.9 rating but more households were watching NFL Network coverage that was simulcast on WUTV, the Fox affiliate.

WUTV averaged an 8.5 rating for the two hours, with NFL Network getting a 3.5 rating of its own for a combined 12.0 rating.

Not a Man of Troy: Allen received mixed results from the pundits, with the harshest criticism coming from Fox's No. 1 analyst Troy Aikman, the former Dallas star. Aikman questioned Allen's ability to see secondary receivers and added inaccuracy is a quarterback issue that is rarely overcome with time. But he added "he has a big upside as we all know."

NFL Network's highly-respected Mike Mayock called Allen a "project." Over at ESPN, Kirk Herbstreit said he liked the pick and Louis Riddick added Allen is "the perfect fit" for the weather, the division and the Bills offense. But Allen's biggest fan was Mel Kiper Jr., who said "he is a difference maker, a big-time talent, a rare talent."

Benigni is the Lone One in Lone Star State: Interestingly, Channel 2's Adam Benigni was the only local TV reporter from the Big Three stations in Dallas, where the draft was held.

He scored a lengthy, impressive one-on-one interview with Allen during which the sports director asked him about the racist tweets the quarterback posted when he was high school and the accuracy question. Allen's smile understandably disappeared and he turned serious when Benigni brought up the tweets.

Trading Places: ESPN's Adam Schefter said the Bills tried to make a deal with Denver for the fifth pick, and Mortensen said they tried to make a deal with Cleveland for the fourth pick before trading with Tampa Bay. Mortensen said the Bills didn't want to pay Cleveland's price and Schefter said Denver decided to keep its pick to draft defensive end Bradley Chubb.

Twos Are Better Than a No. 1: After the Bills second trade to Baltimore to move up to grab Virginia Tech linebacker Tremaine Edmunds for the Bills later' first-round pick and two No. 2 picks, The NFL Network's Mayock explained why the Ravens wanted two No. 2's rather than the Bills' second No. 1. He said because of the quality of the draft, teams felt two No. 2's were a better price than a No. 1.

Mixed Results: All three local stations went to a local bar to find out what Bills fans thought of the selection of Allen. WKBW-TV's (Channel 7) Jeff Rusack said "high hopes changed to mixed emotions" after the pick was made and "a lot of people" think the Bills "took the wrong guy."

WIVB-TV's (Channel 4) Rachele Mongiovi also said there was a "mixed reaction" and added "a lot of fans were calling it a horrible pick but others were pretty optimistic."

But WGRZ-TV (Channel 2 anchor) Scott Levin introduced a report by saying "it seems they (Bills fans) are pretty happy." Then the station ran three soundbites supporting the pick and none against it.

Simms on Allen: I know how much Twitter used to kill CBS' former No. 1 analyst Phil Simms. But on Wednesday, he said he loved Allen and added the accuracy issue was overblown.

The Weather Angle: There may be weather analytics that prove the Buffalo climate isn't any different than that of several other Eastern and Midwest cities that have NFL teams, but the narrative that Allen was the right person for Buffalo because he played in Wyoming was pushed by just about every analyst.

Most Confusing Moment: While The NFL Network's Steve Mariucci thought the Bills should have picked UCLA quarterback Josh Rosen instead of Allen, he stressed the importance of big hands and other skills that made it seem like he was an Allen man.

Twitter Is Slow: The social network was often only a few seconds ahead – if that – of announcing the picks before they were made on TV.

Channel 2's Poll: Of course, the NFL Draft prompts a lot of silliness. Which brings us to Channel 2's unscientific poll about whether the pick of Allen was a good one or not.

According to Channel 2, the early vote was 67 percent against and 33 percent for it. It didn't say how many people voted. Usually, there is an update later in the newscast. I didn't see one. Now that's really silly.