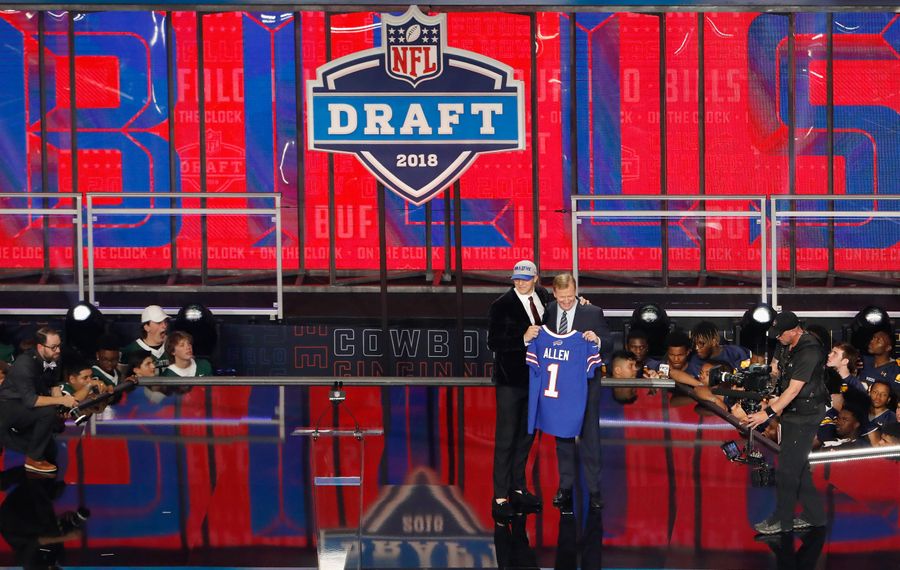 No matter how things play out in the future, the opening night of the 2018 NFL Draft will be regarded as a momentous occasion in Buffalo Bills history. Thirty-five years to the day after the franchise selected Hall of Fame quarterback Jim Kelly (along with Wall of Fame linebacker Darryl Talley), the Bills traded up to draft Wyoming quarterback Josh Allen seventh overall and Virginia Tech linebacker Tremaine Edmunds with the No. 16 pick.

"Football-wise, Allen seemed like the perfect fit for the Bills all along," Vic Carucci reports from the draft site in Arlington, Texas. "At 6-foot-5 and 237 pounds and with the most powerful arm of any college prospect to come along in a while, he is the big, strong pocket passer the team needs to handle the rugged weather with which he'll have to deal at New Era Field."

Edmunds infuses Buffalo's defense with size and youth. Turing 20 next week, he is the youngest player drafted into the NFL since 2007. The 6-5, 250-pound Butkus Award finalist is also the biggest linebacker in the draft.

Get to know the new guys: Jay Skurski highlights five facts about Josh Allen, and Nick Veronica does the same for Tremaine Edmunds.

Draft capital investments: The Bills gave up the No. 53 and 56 picks in the second round to jump five spots and select Allen. According to our interactive draft pick calculator, it was a bit of an overpay. Moving up six spots for Edmunds, the Bills parted with the first pick of the third round (No. 65) and got back a fifth-rounder (No. 154).

Analysis: In his first draft as an NFL general manager, Brandon Beane took a big risk on a big arm, Jerry Sullivan writes. Schematically, Mark Gaughan breaks down how the Bills' offense can follow the Carolina model.

Looking ahead: What selections do the Bills have left after their two big trades? Will there be wide receivers available when the Bills make their next pick? Mark Gaughan has the answers.

Twitter takes: The Josh Allen selection drew mixed reactions from Bills fans. Edmunds, on the other hand, was praised as a steal.

National media grades: CBS gave the Bills an A+, but several other analysts panned the Allen pick.

Damage control: Earlier on Thursday, Allen apologized for using racial slurs in tweets sent when he was 15 years old. "There's not an ounce of hate in my body," Allen added after the Bills selected him. "I love all my teammates, my former teammates can vouch for me there."

If Josh Allen starts the opener ... he'll become the first quarterback in the NFL's modern era to be a Week 1 starter after being drafted by a playoff team.