An ocean theme will soon transform windows of an Allentown cafe, with jellyfish fashioned from plastic bags, perhaps with their tentacles dangling above customers. A two-headed sea turtle of cardboard and papier-mache will complete the scene.

Across the street from Grindhaus, salvaged pieces of blue jeans, their pockets strung together and hung vertically with "gardens" of paper flowers will play off the "pocket full of posies" theme filling the floor-to-ceiling windows inside the row house that is Salon Bandelian.

That's a sampling of what will be 13 "green" business window art installations coming in May as part of Green Window City, a volunteer-run project that will be featured along the 10-block section of Allen from Main Street to Days Park. It brings merchants and local artists together, with window displays crafted from other people's junk.

"It's junk that's being repurposed into treasure," clarified Kelly Atkinson, project manager and an Allentown resident who first launched Green Window City four years ago while living in Edmonton, Alberta. "All of the work is beautiful. They all are unique."

Plastic straws and bottles, newspaper, cardboard, toilet paper and paper towel rolls and natural fiber bedsheets are just a few of the supplies that artists are using. The idea is to get people to think sustainability. This year's event opening May 4 is the largest so far and is the third time it's been offered here, after an absence last year.

Jessica Widmer is continuing work on her ocean theme for Grindhaus, still tweaking how a few jellyfish will look and her 4.5-foot-by-3.5 foot sea turtle.

"He has two heads and way too many fins," Widmer quipped about her creation taking form in her home studio. "I think I want to go slightly eccentric with the colors. He's one massive sea turtle."

Her inspiration was to represent sea life since growing pollution in oceans is leading to more plastic bags that sea turtles think are jellyfish and mistakenly eat and choke to death. "I love reusing materials and making a statement about the environment, and wanted to do something that I feel strongly about," she said. 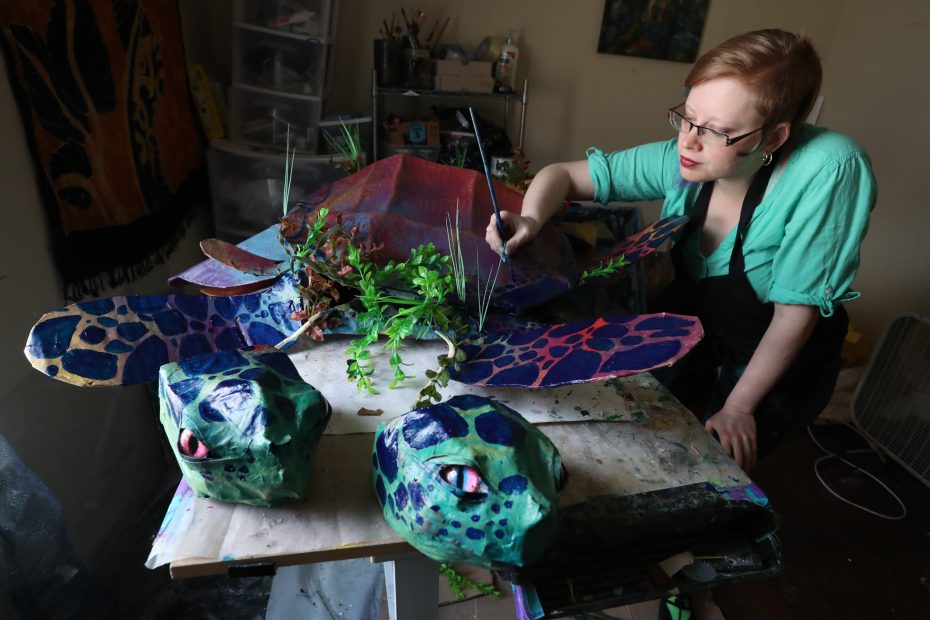 Some projects are coming together in artists' studios and homes. In Leah Bogdan's case, her honeycomb project is coming to life on her grandmother's old wooden kitchen table as she uses paper towel tubes and wax from the stumps of old candles.

Renee Bandelian remembers what a hit the Nemo exhibit in her hair salon windows was two years ago. "I didn't want to take it down," she said. "It was spectacular. People would walk by and come in and ask questions. Not one person would go by without stopping."

The blue jean pocket gardens are the creation of City Honors School students from the Pelion Community Garden.

On the other end of Allentown, Hyatt's All Things Creative store windows will have a paper sculpture in its windows. Janna Willoughby-Lohr, a papermaker and bookbinder, said her goal is to use as many materials that people use all the time, but don't need – credit card offers that come in the mail, drinking straws and packing materials.

"I want my piece to get people to be more aware they are using things that immediately go right into the garbage," she said, not quite sure yet what it will be. "It will be centered around the theme of annoying excess. I tend to be more of a political statement/social action type of artist."

Atkinson said Allentown was a perfect fit for the project. "It has to have that walkability and density of storefronts to really feel that something is happening here."