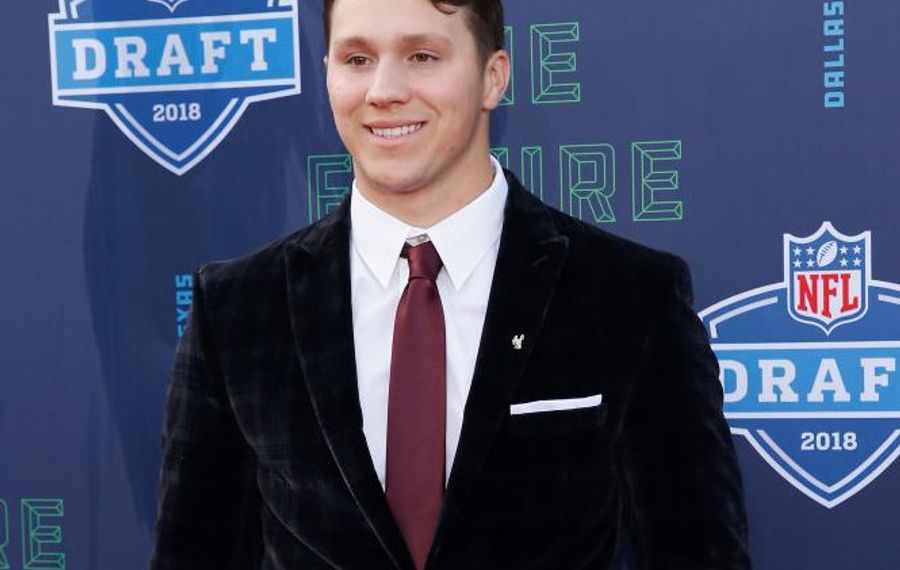 ARLINGTON, Texas – His entry into the NFL was a bit bumpy, to say the least.

On Wednesday night, tweets by Josh Allen from when he was 15 years old surfaced that contained racial slurs. On Thursday morning, he was making a public apology.

By Thursday night, the former Wyoming standout was thanking the Buffalo Bills for taking a big leap of faith in him by trading up from the 12th to seventh overall pick to select him as their future franchise quarterback. The Bills sent two second-round picks (Nos. 53 and 56) to the Tampa Bay Buccaneers, while also receiving a seventh-rounder (255 overall).

"I want to thank the coaching staff, the organization for putting the trust in me coming up to get me," Allen said. "Now it's my job to go earn their trust, compete and learn every day, become the best me that I can be. And with the help of these coaches, I definitely think that's possible.

"This is, hopefully, where I'll be living for the next 15 to 20 years. I don't want to play for another team."

On Wednesday night, there were plenty of questions about which team would want the potential bad publicity from selecting Allen because of the tweets. The Bills became that team, and now they and Allen will be dealing with the fallout, along with all that will go into developing him into their long-term starter.

"Obviously, going back six years ago, very dumb, young, immature," Allen said. "What happened was my fault and I didn't mean any malintentions towards anybody. At the same time, I've got to take responsibility for what happened. I've learned lessons along the way and this just kind of reiterates the lesson that whatever you say can come back to haunt you and you've got to be more careful, but the lesson has been learned and it's been learned extremely well."

The Bills are more than satisfied with that.

"He’s a really good kid," General Manager Brandon Beane told reporters at One Bills Drive. "We did a lot of background on him. You know, obviously the stuff came up today, we researched that, followed up with him, so we feel very good about it.

"He is Buffalo. You (reporters) will see that when you meet him. We called around, but we were trying to be diligent and find what we thought was the best landing spot for us. And patience paid off to save the 22nd pick, and that was part of it. We were willing to part with it, but we were also excited to keep it, and it worked out in our favor to land in our spot."

New Bills QB Josh Allen: 'There's not an ounce of hate in my body'

Allen realizes that he will be facing plenty more questions about the contents of the tweets and whether it is a reflection of the person he is.

"Oh, definitely, absolutely," Allen said. "I've got to take it. That's my fault, it was on my Twitter, so I've got to be able to roll with the punches, understand the seriousness of it all and the carelessness I had when I was 15 years old. But I'm looking forward to getting in with my teammates and making sure they understand and see the real me. There's not an ounce of hate in my body.

"I love all my teammates, my former teammates can vouch for me there."

The Bills' decision-makers clearly fell in love with Allen's size and ultra-powerful arm (he has been clocked throwing passes at 62 mph). Beane emphasized to reporters.

"You know, this is Buffalo," Beane said in reference to Allen's ability to throw under challenging weather conditions. "Big guy. An athlete. Really, for his size, you look at all the testing numbers and you look at the film, very good athlete. Made some plays in the pocket and on the run."

A major criticism of Allen has been a lack of accuracy. He had a 56-percent career completion percentage at Wyoming. That didn't bother the Bills.

"Yeah, I mean, no matter if we selected any quarterback, they all had something – a knock on them," Beane said. "I mean, you’ve got to pick what you’re willing to deal with and work with. We just think his make up is going to help him work on his flaws. We like a lot of his strengths. And that will be part of our job here, is to accentuate his strengths and work on his fundamentals and the things that his so-called weaknesses are, and I have no doubt that he will do that."

Allen is excited about joining what he sees is a situation in which he can find success. He is impressed with coach Sean McDermott, offensive coordinator Brian Daboll, and quarterbacks coach David Culley. Allen got to meet and talk with him during his pre-draft visit to One Bills Drive.

"Obviously, getting there, they've got a really great coaching staff put together," Allen said. "I'm excited to be with them."

He is making no assumptions about what his role will be as a rookie. The Bills have two other quarterbacks on the roster, AJ McCarron and Nathan Peterman.

For now, Allen is more concerned about fitting in than filling the top spot on the depth chart.

If Josh Allen is opening-day starter, Bills would make history

Has Allen yet comprehended that he is widely viewed as possibly the Bills' most important quarterback selection – or pick of any kind – since Hall of Famers Jim Kelly in 1983?

"They still talk about this guy. And Jim Kelly's a legend. I'm praying for him and what he's been going through (in recovering from recent cancer surgery)," Allen said. "But the things he was able to do at Buffalo is something special and to be in the same breath as Jim Kelly is pretty awesome and, hopefully, one day I'll be to his level. And with the help of my teammates and my coaches we tango back to playoff contenders and Super Bowl contenders.

"That's going to be down the road, but with the team that's there in place, they've got some really good guys, some really good talent and I'm excited to step in and start meeting these guys."

Allen said he was not caught up with the idea that he must start as a rookie, even though it is going to be difficult for McDermott to keep the seventh overall pick of the draft on the sidelines this season.

"You know, it's not important for me," Allen said. "Obviously, the competitor in me wants to play right away. I understand that the NFL's a different animal to tackle, so I'm going go in, I'm just going to compete, I'm going to be the best me that I can be every day to earn the trust of my coaches and my teammates and I'm going to be the best teammate that I can be, whether I'm starting, I'm the guy behind whoever's playing – whether it's A.J. or Nate. Just trying to help out the team win games, whatever the task may be."