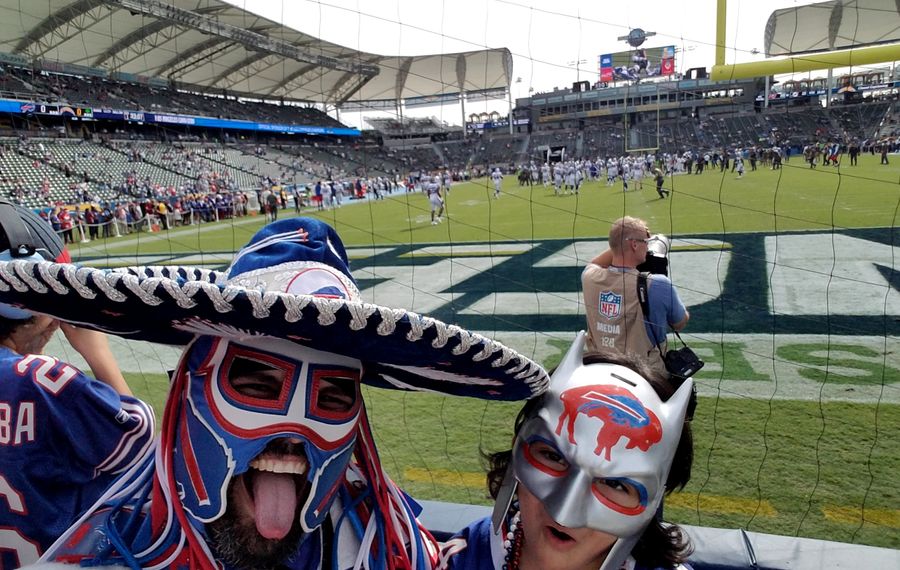 The NFL Draft is in Texas and “Pancho Billa” will be there.

While he wasn't expected to announce a pick, Pancho Billa will lead the Bills’ delegation of 50 fans in the NFL’s new “Inner Circle,” an on-the-field experience.

Each team was able to select 50 people, but the Bills turned the selections over to Ezra Castro, the man behind the Pancho Billa regalia. The group will attend Thursday’s Day 1 and Friday’s Day 2 of the draft and will wear Bills shirts that say “Pancho Power” on the sleeve. When the Bills are on the clock, the group will be highlighted with team-provided foam fingers and LED lanyards from the NFL that light up in Bills colors.

Castro, the president of the Dallas Fort-Worth Bills Backers chapter and a lifelong Bills fan, has been battling cancer since last fall. With the draft in his hometown, a group of supporters started a Twitter campaign in hopes that he might be able to announce one of the Bills’ picks. That campaign dovetailed with the #PanchoPower hashtag used by Bills fans to show their support for Castro and encourage others to fight through challenges.

"When the NFL announced the draft would be in Dallas, my town, at that moment I knew not only did I have to be at it, but a part of it," Castro said.

Castro travels each season to five or six games around the country, including the home opener in Buffalo. Castro was in New York last autumn for the Thursday night game against the Jets. During a visit to the Statue of Liberty, he noticed a nagging problem had grown even worse. His left arm had gone entirely numb.

Back in Texas, he went to a doctor, expecting to learn the cause was something as simple as a pinched nerve.

Instead, Castro heard "the worst news of my life."

He had a mass wrapped around his spine, cancer that had spread to his liver, lungs and lymph nodes.

The doctors wanted to operate quickly, but Castro had something he needed to do first. He took his 5-year-old son Ginobili — named for the longtime star of basketball's San Antonio Spurs — to the Bills-Chargers game in Carson, Calif. Ginobili, called "Panchito" by his dad, wore a costume of his own.

"I don't know if that's the last Bills game I will ever see or not," said Castro, who had to pause to collect his composure while recalling that day. What matters, he said, is the way his son said to him afterward, "Dad, I loved every minute of that game," how Castro is sure Ginobili will remember the trip with his father for the rest of his life.”

On Dec. 13, Castro had the surgery. The doctors removed the mass, and he said they used cadaver bones to replace two weakened portions of his back. For the first time in as long as he can remember, Castro — at one point still physically incapable of leaving his bed — was unable to join other Bills fans in watching two Buffalo games in a row.

Yet he was at the club’s meeting point for the Miami game in the regular season finale. He wore a neck brace and he began crying as soon as he walked in the door, when the entire place — friends who have supported a GoFundMe account on his behalf — rose in a sustained standing ovation.

Much as he does at Bills games, Castro again gets to lead Bills fans. This time at what might be the team’s biggest draft in 30 years. Can’t everyone use some #PanchoPower?