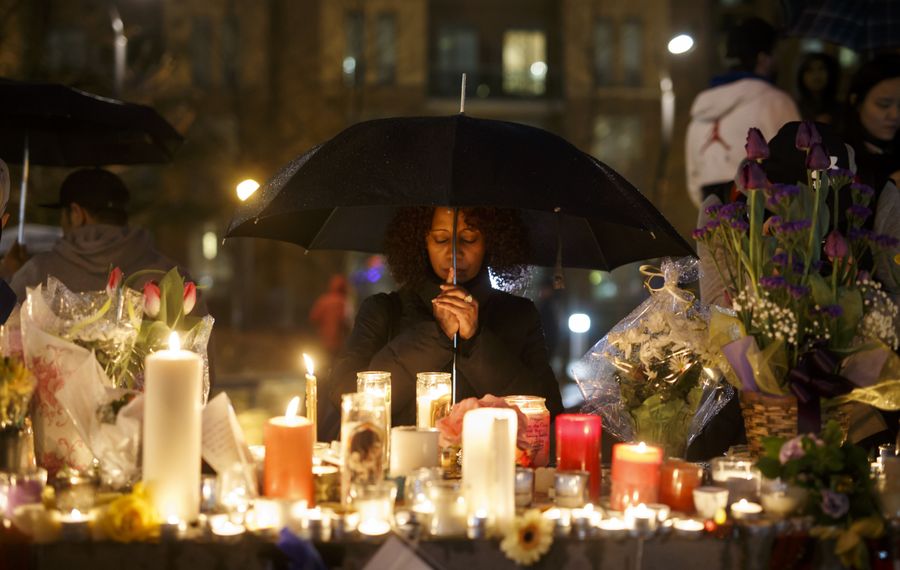 TORONTO - One was a great-grandmother who loved the Toronto Blue Jays. Another was a single mother from Sri Lanka. And one was a “super happy and energetic young woman” who volunteered to build homes in the Dominican Republic.

The three women were among the 10 people killed on Monday afternoon when a 25-year-old man rammed a white rental van into pedestrians on a busy Toronto thoroughfare, in what was one of the deadliest mass killings in Canadian history.

Authorities say that they will not release the names of victims until they have identified all of them - a process that could take several days.

But portraits of some of the dead began to emerge Wednesday as friends and family members shared stories about the lives cut short in an attack whose motives remain unclear.

Renuka Amarasinghe, a single mother from Sri Lanka of a 7-year-old son, was the latest victim to be identified. Her death was confirmed by John Malloy, the director of education for the Toronto District School Board, who said that she had worked at a number of schools as a nutrition services staff member since 2015.

Earl Haig Secondary School, where Malloy said Amarasinghe had just completed her first day of work, is a short distance from where Monday’s attack took place.

Amarasinghe was also a member of the Mahavihara Buddhist Meditation Centre, according to the Toronto Star. Ahangama Rathanasiri Thero, the president and chief monk at the temple, told the Star that it is unlikely that her body will be repatriated to Sri Lanka, where she has family. A GoFundMe page has been set up for her son, who Thero said is now being cared for by Amarasinghe’s friends.

Elwood Delaney confirmed the death of his grandmother Dorothy Sewell, 80, in a public Facebook post on Tuesday, in which the woman he affectionately referred to as his “nan” is seen in photos with the memorabilia of the Toronto Blue Jays baseball team.

“You will always be loved and your love of sports will always be with me while I cheer with you,” Delaney wrote in a post that also had some words for Alek Minassian, the man arrested and charged with 10 counts of first-degree murder in connection with the attack.

“Thanks to you I had to tell my 3 children and my wife that cause of you they will no longer get to talk to Nan” on their birthdays or Christmas, Delaney wrote.

Anne Marie D’Amico, 30, was the first victim to be identified. She worked at the Canadian headquarters of the investment management firm Invesco, which has its headquarters on the street where the attack unfolded.

Friends and family members described her as big-hearted, kind and altruistic. “She wouldn’t stop until she went the extra miles for others,” her family said in a statement. “It comforts us knowing that the world has a chance to know her and we hope that in this time, people fight with the same altruism rather than anger and hatred.”

D’Amico also volunteered with Live Different, a Canadian charity, and took part in two humanitarian trips to Puerta Plata in the Dominican Republic, where she helped build homes for those in need.

David Hamilton, the manager of social partnerships for Live Different, said that those who participated in those trips remember D’Amico as a “super happy and energetic young woman,” who was “incredibly funny and a team leader.”

Tennis Canada said that D’Amico, who had volunteered with the organization since she was 12, was voted “volunteer of the year” in 2016. She worked her way up from ballgirl and most recently led a committee on stadium control.

Chul Min “Eddie” Kang, who worked as a chef at Copacabana, a popular Brazilian steakhouse chain in Toronto, was also among the dead.

Seneca College, where Minassian was a student, confirmed that one of its students was among the dead, although it did not provide details, citing privacy concerns.

International visitors to Toronto were also among the victims.

Munir Najjar, a Jordanian national visiting family, was confirmed dead by the Jordanian embassy in Ottawa. South Korea’s foreign ministry tweeted that two of its nationals were also among the victims.

At a news conference on Tuesday, officials said that the victims of the attack were “predominantly female,” although it would not say whether women were deliberately targeted by Minassian. Their ages ranged from the mid-20s to the 80s, and their injuries from scrapes and bruises to more “terrible” injuries, according to Dirk Huyer, Ontario’s chief coroner.

Huyer said that the task of identifying the dead was laden with “significant complexities,” particularly because the injuries took place over a number of city blocks and at a busy intersection.

A Facebook account belonging to Minassian posted - just minutes before the attack, according to police - a message referencing a misogynistic online subculture for “involuntarily celibate” men and praising the man who carried out a mass killing in Santa Barbara, California, in 2014.