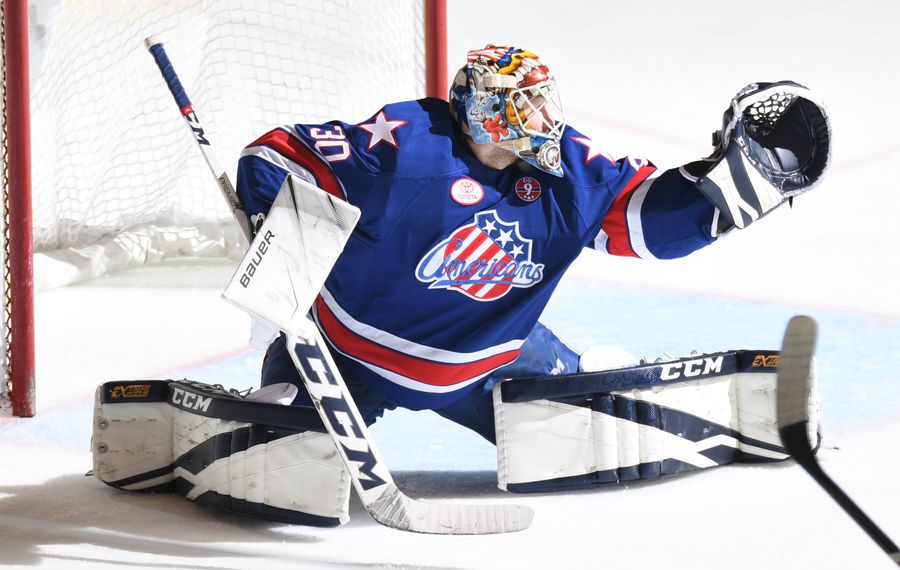 ROCHESTER – The end hit Linus Ullmark hard. The goals against hurt, but knowing the Rochester Americans wouldn't be together anymore brought him to tears.

"It's been real fun," Ullmark said Wednesday after wiping his eyes and pausing to take a deep breath. "I was looking forward to this my three years playing here. Just to go out there and not perform, it just hurts. It just hurts."

The pain was evident on the scoreboard. For the third straight game, the Syracuse Crunch put up six goals. The latest came in a 6-3 victory that swept the Amerks out of the postseason, three games to none.

"We just didn't have it against them," Amerks defenseman Brendan Guhle said in BlueCross Arena.

The locker room was filled with disappointed faces and subpar numbers. Syracuse particularly tormented Ullmark, who allowed 16 goals on 80 shots for a .800 save percentage. The Crunch added two empty-net goals.

With the Crunch consistently pressuring the Amerks, Guhle was unable to show off his game-breaking speed. He had no points and was minus-6 in a learning experience.

"Sometimes you can't be hopping in the rush every single shift," the rookie said. "Sometimes it's just not there. You can't force it because then they're going to make you pay. Against teams like this that track hard and have good offensive players, you've got to be careful sometimes and you've got to worry about playing defense first."

Left wing Alex Nylander was also invisible offensively. He played the opening two periods on the fourth line, which is where he spent Game Two, but moved up in the third. He had a wide-open blast from the slot for just his second shot of the series and finished with no points.

The long-awaited taste of the playoffs barely qualified as an amuse-bouche for right wing Hudson Fasching. The pending restricted free agent was a healthy scratch for the second game in a row.

The insult of a three-game sweep also featured a distressing injury. Right wing Justin Bailey, a pending RFA who was the Amerks' top player during the final two games, went to the trainers' room with 4:55 remaining. Daniel Walcott flipped Bailey with a low hit, and the forward rolled on the ice after landing on his left shoulder. Bailey headed to the back with his left arm dangling limply at his side.

There was no update as Amerks staff shielded the trainers' room.

The second period extended the droughts Wednesday. Bailey scored his second goal of the playoffs with 8:45 gone, giving the Amerks a 2-1 lead. Then the wheels fell off.

The Amerks' 2-1 lead disintegrated into a 4-2 hole. The home team looked shell-shocked.

"That's what good teams will do," Guhle said. "They'll come back at you and have a push after you score. We have to be ready for that, and we weren't."

While the playoffs were a disappointment, the Amerks' preseason goal was to reach the postseason and build a winning attitude. While the sting will linger, the success will also be remembered.

With family atmosphere, Amerks live up to preseason promise

The Carolina Hurricanes are reportedly circling back for another look at Steve Greeley. They interviewed the Sabres assistant general manager for their open GM job in March, and TSN reported Wednesday night that Greeley will have a follow-up interview today.

Greeley is in his first season with the Sabres. Buffalo General Manager Jason Botterill hired him away from the New York Rangers, where Greeley served as the assistant director of player personnel. The 37-year-old oversees the pro scouting department and courts NCAA and European free agents.

Inside the Sabres: Assistant GM Steve Greeley is on the rise, sees Buffalo doing the same