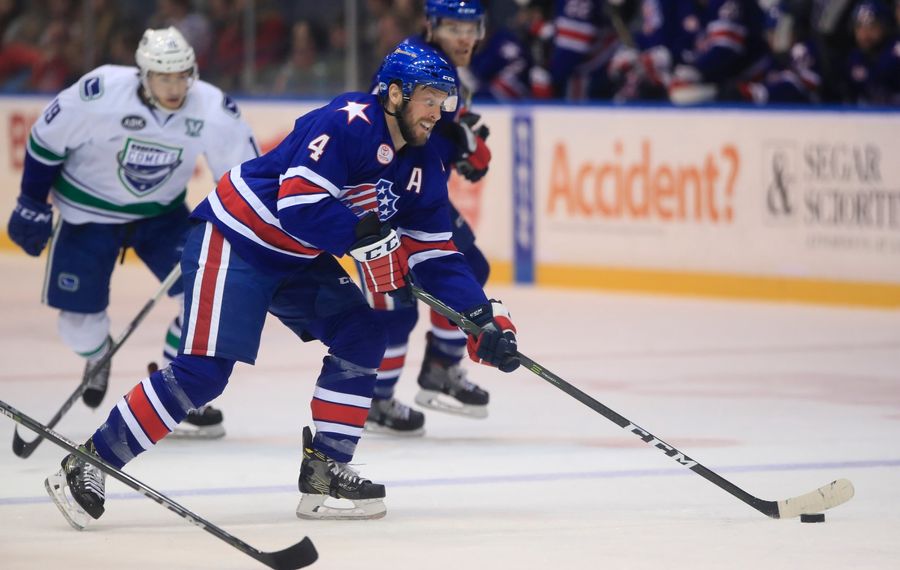 Tossed back in the NHL Draft after failing to get a contract with Washington, the defenseman made the most of his 2003 seventh-round selection by the Buffalo Sabres. He's now in his 15th pro season, including parts of five with Buffalo and another five with Rochester.

Just as notably, Paetsch was caught up in a sports gambling ring. He pleaded guilty in 2015 to two charges related to the off-shore gambling enterprise. He was accused of recruiting hockey players and transmitting their bets, which earned him a sentence of eight months home detention, 400 hours of community service and $265,000 forfeiture.

This season, the Amerks named him their Man of the Year for contributing to the betterment of the Rochester community.

"Anybody who has been around me enough knows who I really am," Paetsch said Wednesday in BlueCross Arena. "That's why I'm back here. That's why they have me in the locker room and I'm still playing after 15 years.

"I care a lot about people and a lot about the community, and people that know me know that's who I am."

The 35-year-old refused to let the "embarrassment" of the gambling-related conviction define him as a person. The Rochester-area resident visited schools, libraries and hospitals, and he worked with the developmentally disabled.

Had an amazing time with @LifeAssistInc. Thank you so much for inviting my son and I to play floor hockey with you. pic.twitter.com/z7u5a330hL

The list includes the Amerks. He's back to where he started, and he's helping the organization begin its transformation to a winner.

Paetsch began his pro career in Rochester in 2003 and spent three seasons with the Amerks. After playing one game for the Sabres in 2005-06, he famously made his playoff debut in Game Seven of the 2006 Eastern Conference final in place of ailing Jay McKee.

Paetsch totaled 158 games with Buffalo, which traded him to Columbus in 2010. He spent the past five years with Grand Rapids of the American Hockey League, winning Calder Cup titles in 2013 and 2017. He wanted to bring that championship experience home.

He also knew the Sabres wanted to build their organization from the ground up.

"I live here, so I see the news and everything," said Paetsch, who helped Rochester end a three-year playoff drought. "It's the whole reason for wanting to come back."

With family atmosphere, Amerks live up to preseason promise

Many of the lessons Paetsch taught came off the ice. He suffered a broken leg in just his third game and missed nearly three months. He came back and totaled nine assists in 22 games.

"He's always been a team-first guy, and he's obviously great in the locker room," said Amerks coach Chris Taylor, who also played with Paetsch in Rochester. "He did a great job when he played for us. He had a tough injury, and he battled back.

"It was a good experience for guys to see how a veteran came back and how he did his rehab. There's a lot of different benefits of having people like that and what they did."

It was another instance of Paetsch making the most of a second chance. He's letting that trait define him. He also hopes laying the groundwork for perennial winners in Rochester and Buffalo ends up on his résumé.

"It was pretty similar to the situation my first year in Grand Rapids," Paetsch said. "They hadn’t made the playoffs in three years as well, and they did an overhaul. We brought in all new vets and new veteran leadership.

"They did a similar thing here with the same successful results. We'll see where it goes from here. As the room came together and jelled, I think we created an atmosphere that was cohesive to winning."