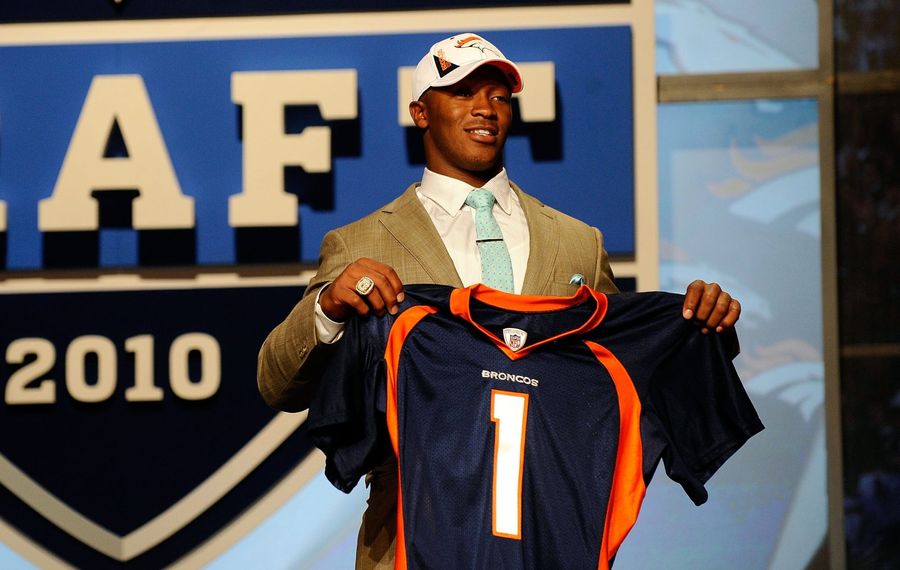 Here’s a look at the past 10 players to be picked 22nd overall:

2016: Josh Doctson, WR, Washington: An Achilles’ injury cost him most of his rookie season, but Doctson made 14 starts last year, catching 35 balls for 502 yards and six touchdowns.

2015: Bud Dupree, OLB, Pittsburgh Steelers: The Steelers’ defense is notoriously hard for rookies to adjust to, but Dupree finally cemented himself in the lineup last season, making 15 starts for the AFC North champs. Owns 14.5 career sacks.

2014: Johnny Manziel, QB, Cleveland Browns: A notorious draft bust, Manziel was out of the league after just two seasons. But he recent said he got sober and is attempting to make a comeback.

2013: Desmond Trufant, DB, Atlanta Falcons: An immediate starter with the Falcons and made the 2015 Pro Bowl. Owns nine interceptions, 60 passes defended and 202 tackles.

2012: Brandon Weeden, QB, Cleveland Browns: Another Browns bust. Lasted two seasons in Cleveland before being traded and hasn’t appeared in a game since 2015. Recently signed with Houston.

2011: Anthony Castonzo, OT, Indianapolis Colts: The Colts’ sturdy left tackle has blossomed into a top player at his position. Started all 105 career games and was Pro Football Focus’ sixth-ranked tackle in 2017.

2009: Percy Harvin, WR, Minnesota Vikings: A speedster and Super Bowl champion whose career was limited by injuries. Severe migraines cut short his years with the Bills in 2015 and ‘16.

2008: Felix Jones, RB, Dallas Cowboys: A productive back but one who usually played second-fiddle in the Cowboys’ backfield. Out of the league after six years; finished with over 4,000 yards from scrimmage.