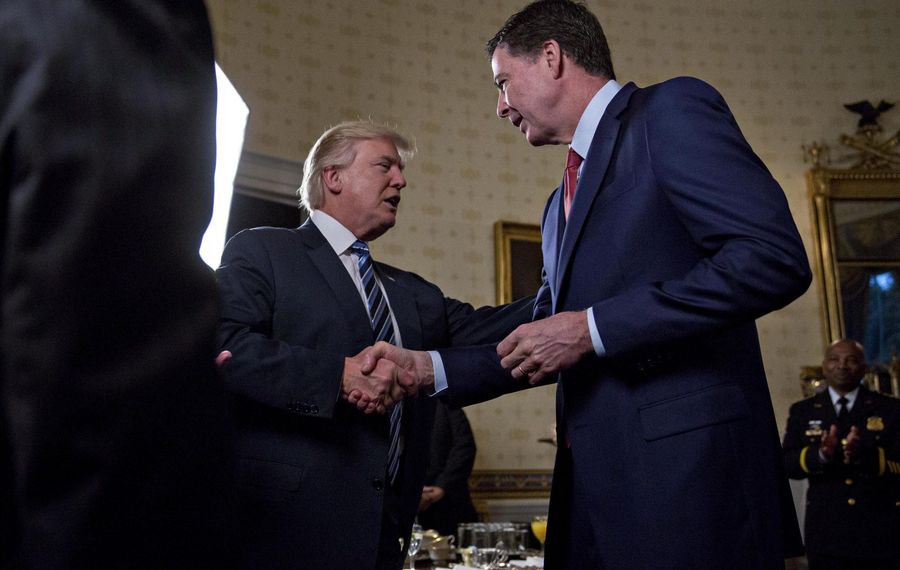 WASHINGTON – I read the "Comey memos" so you wouldn't have to, and because doing so is free and his book isn't.

And I found that former FBI director James Comey is at least weaving a largely consistent story about his interactions with the man who fired him: President Trump.

The memos that Comey wrote after his interactions with Trump – which were released late last week and which you can read for yourself here – echo Comey's testimony before Congress last summer. They also echo episodes Comey details in his book "A Higher Loyalty" – where, according to reviews, he tells his story with much more Trumpian embellishment.

The memos differ from the testimony and the book in one key way, though. They make it clear that Comey went out of his way to try to please the president.

Nevertheless, the former FBI director comes across as something of a Dudley Do-Right in all three venues.

Note, for example, how Comey said he reacted to Trump's request for loyalty during a dinner with Trump that the then-FBI director detailed in a Jan. 27, 2017, memo:

"He (Trump) replied that he needed loyalty and expected loyalty," Comey wrote in that memo. "I did not reply, or even nod or change my facial expression, which he noted because we came back to it later."

Beyond Comey's consistency on the details, a few new revelations in the memos really do stand out. For example:

The infamous "dossier" is, at least to some degree, credible. Compiled by a research firm called Fusion GPS – first at the request of Republicans, but later on the dime of the Hillary Clinton presidential campaign – the dossier includes all sorts of unfiltered intelligence about Trump.

In January 2017, two weeks before Trump was inaugurated, Comey briefed the president-elect on the dossier's contents. And in a February 2017 memo, he described why he did that in his recollection of a conversation with then-White House Chief of Staff Reince Priebus.

“I explained that the analysts from all three (intelligence) agencies agreed it was relevant and that portions of the material were corroborated by other intelligence,” Comey wrote.

This is huge. This means that some of the dossier's allegations – although we don't know which ones – are probably true.

So the dossier is much more than a political document. In special counsel Robert Mueller's investigation of Russian meddling in the 2016 presidential election, the dossier could even become evidence.

And remember: the document includes intelligence that the Russian government had damaging information on Trump.

Trump is obsessed with the dossier's most salacious allegation. Unless you have spent the past year on the moon, you probably know that the dossier includes an allegation that while in Moscow for the Miss Universe pageant in 2013, Trump witnessed two prostitutes urinating on each other in a bed once used by then-President Barack Obama. Worse yet, the dossier says the Russians have a tape of this episode.

Now you might think this would be something Trump wouldn't want to talk about, but it turns out he raised the issue with Comey four times.

A week after his inauguration, Comey met with Trump again and "he turned to what he called 'the golden showers thing' and ... repeated that it was a complete fabrication and 'fake news,' " Comey wrote.

Then in early February 2017, Comey recounted another conversation where Trump brought up the subject again, saying "the hookers thing" is nonsense.

Then on March 30, 2017, Trump called Comey to say, among other things, that he was not involved with prostitutes.

It's important to stress that this allegation has not been corroborated.  But you have to wonder: Why is Trump so obsessed with this?

The president wants to jail reporters. Perhaps the most revelatory thing in the Comey memos is the conversation he recounts in which the president suggests jailing reporters for publishing leaked information.

"They spend a couple nights in jail, make a new friend, and they are ready to talk" – that is, ready to identify the government officials who leaked inside information, Trump said, according to Comey.

And while it's possible Trump was joking, the detail he went into on this issue makes it sound like anything but a joke.

Comey is a suck-up. The then-FBI director's response to Trump's call for the jailing of journalists is very telling.

The memos show this to be rather characteristic behavior on the part of Comey, who appears to be sucking up to the president again and again throughout these documents.

"I said I was eager to find leakers and would like to nail one to the door as a message," Comey said earlier in the same conversation.

"I explained that he could count on me to always tell him the truth," Comey wrote after meeting with Trump on Jan. 28, 2017.

And on March 30, when Trump asked him to try to get out the news that the president himself was not being investigated in the Russia probe, "I told him I would see what we could do and that we would do the work well and as quickly as we could."

Yes, sir. Anything you want, sir.

Given the attitude Comey seemed to show in his interactions with the president, it's no surprise that Trump is furious that the former FBI director now has written a book that calls the Trump presidency "a forest fire," one that accuses the president of creating “a cocoon of alternative reality that he was busily wrapping around all of us.”

In light of the memos, "A Higher Loyalty" seems like a betrayal. Which is why you have to wonder if Comey should have called his book "A Higher Royalty."

President Trump holds a news conference, and later a state dinner, with French President Emmanuel Macron … The Supreme Court hears arguments in a case involving congressional district gerrymandering in Texas … Agriculture Secretary Sonny Purdue testifies at a Senate hearing on "The State of Rural America" … The Senate Finance Committee holds a hearing on the new tax law … House Democratic Leader Nancy Pelosi discusses her party's agenda at an event sponsored by Georgetown University's Institute of Politics and Public Service … The Atlantic Council and Wilson Center hold a discussion on U.S.-Mexican relations and the future of NAFTA.

The New York Times details Facebook's ability to ignite conflict ... The Washington Post's Petula Dvorak portrays Holocaust survivors who stayed silent for decades – but who feel they can stay silent no more ... David French of the National Review says the nation owes Attorney General Jeff Sessions and his deputy, Rod Rosenstein, a debt of gratitude ... In New York magazine, Jonathan Chait says the Democratic Party's female candidates for president in 2020 will have to avoid the victim trap ... And The New Republic examines why Republicans keep on attacking House Democratic Leader Nancy Pelosi.