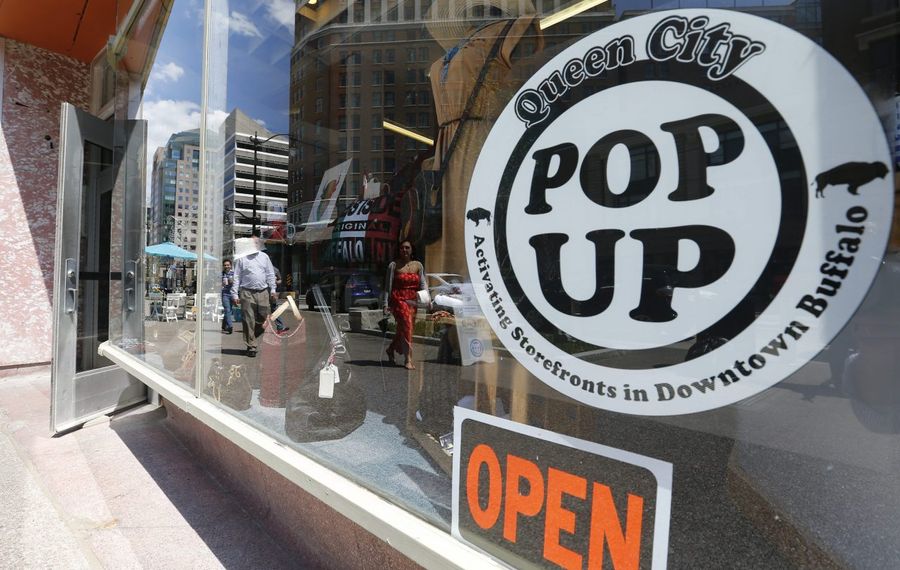 Buffalo Urban Development Corp., Buffalo Place and Working for Downtown are looking for a new group of entrepreneurs and small businesses to participate in the next round of the Queen City Pop-Up retail program.

City officials said applications are now available for retailers interested in participating in the "2018 Spring Edition" of the initiative, which offers free storefront space to new stores looking to boost their business. This new round – supported by Key Success and Ciminelli Real Estate Corp. – will again take place at their 50 Fountain Plaza building in the 500 block of Main Street, at the corner of Chippewa Street, and will run from June 15 through Aug. 31.

The goal of the Queen City Pop-Up program is to bring more small retailers to Main Street in downtown Buffalo and fill up vacant storefronts by giving participants an opportunity to test their products rent-free for two months. Previous participants have reported retail sales increases of more than 50 percent and overall growth in their customer base as a result, and several have opened permanent locations on Main Street after the program ended.

“The revitalization of downtown Main Street has been a catalyst in supporting our city’s continued retail growth and vibrancy," said Buffalo Mayor Byron W. Brown, who chairs BUDC. "We look forward to our next group of unique retailers who are considering downtown Main Street for their retail shops to participate in Queen City Pop-Up.”

The request for proposals and applications are available at BUDC's office at 95 Perry St., or online through the BUDC, Buffalo Place or Working for Downtown websites, and are due by 4 p.m. on May 14.

Separately, BUDC Vice President Brandye Merriweather also announced that it issued its second-quarter request for proposals for Buffalo Building Re-Use Project loans, designed to provide low-rate financing for facade and other improvements to downtown buildings. Proposals are due by June 29.

The agency is also working with the Buffalo Niagara Partnership on a downtown housing demand survey that officials hope to roll out in May.

Additionally, Watts Architecture & Engineering was selected as the design consultant for the Entertainment District, Franklin Street and Court Street project, while Clark Patterson Lee and Wendel Companies are working on the design for the Erie Shelton Square Greenway project.