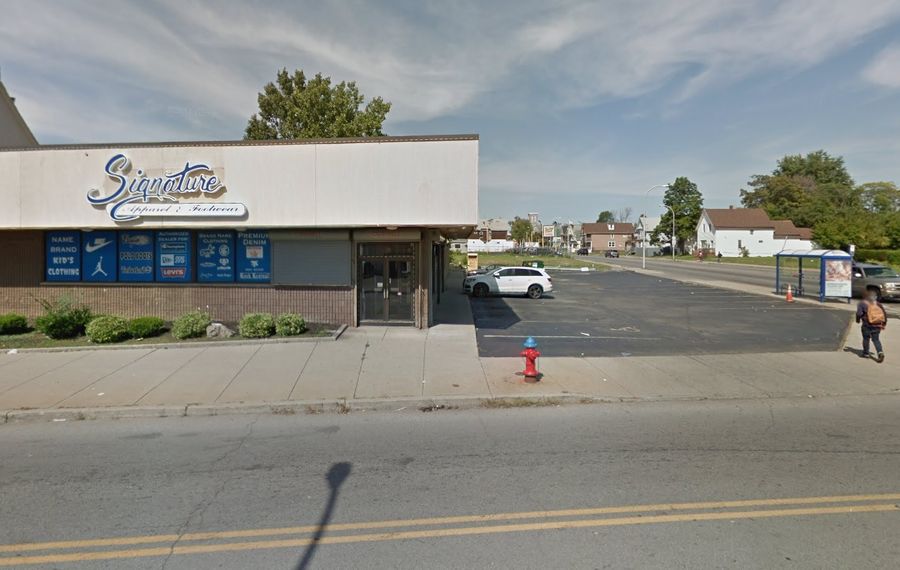 A proposal to double the size of a one-story retail building on Buffalo's East Side was nearly torpedoed Monday, after the property owner came under heavy fire for starting the work without first getting a permit and destabilizing his neighbors in the process.

Ahmed F. Mohamed, owner of the Signature Apparel & Footwear building, wants to nearly double the size of his one-story retail building, located at the angled intersection of Walden and Bailey avenues. Mohamed was seeking Buffalo Planning Board approval to construct a 5,720-square-foot addition to the building at 592 Walden, allowing for four more storefronts to be added, although there are no tenants currently lined up.

The proposal already received a pair of variances from the Zoning Board of Appeals for its corner side yard, including for parking, so the Planning Board was its last stop.

But neighboring property owners, block clubs and even the city lawmaker representing the area turned out to criticize Mohamed's premature excavation of the site, which is causing part of the ground to collapse, even under the adjacent properties. They say don't object to the project, but worry that it's not being done properly.

"I'm happy it's going to be developed, because it's been an eyesore for a long time," said Thaddeus Sawicki, who owns Smiling Ted's Used Cars next door. "My concern is that it's all excavated out, and I have pictures of it starting to collapse. They've already pre-dug everything. It's underneath my fence already."

Garages on nearby Burgard Place are also starting to fall down because of the excavation, which the neighbors say began back in December, without any permits in place. The hole is about 3 feet deep in places, they said. Trees also were cut down, they said, and those that weren't now have their roots exposed, adding to the problem.

They complained to city inspectors, who issued a "stop-work" order when they found out, and directed police to escort any workers off the site, the neighbors said. Even so, one block club president said, workers were there over the weekend cutting down more trees.

Proposed storefront expansion on East Side up for review

"The owner seems to have jumped the gun, and the residents are 100 percent right about the erosion," said Lovejoy Council Member Richard Fontana. "They really did dig down deep, and created a massive problem. Normally, people don't usually come in and dig a big hole and then come into City Hall. That's probably not the way to do it."

Mark Dean, principal at Dean Architects, who designed the project, acknowledged the mistakes, which he said happened before he became aware of them.

"Unfortunately, we hadn't been made aware that the owner had hired someone to come out and excavate the site without a permit. Once we found out, we were able to stop it," he said. "Had we known of his intentions, we would have stopped him."

The board approved the project Monday evening but urged the property owner to talk with the community to resolve the problems.

On Tuesday, city permits officials described the activity as "site work," not an excavation, so no permit was required in advance, they said. Regardless, with the Planning Board approval now in hand, the city no longer has a reason to stop the project, said James Comerford, the city's building and permits commissioner. A phased permit was secured Tuesday to start the foundation work.

Plans call for a brick veneer facade with large windows, metal awnings and Azek composite panels on the front of the new building on the 0.65-acre site. The project, which would take about nine months, also would add 16 parking spaces to the existing lot, for 37 total spaces. Short-term bicycle parking also is included, as is extra lighting for the parking lot.