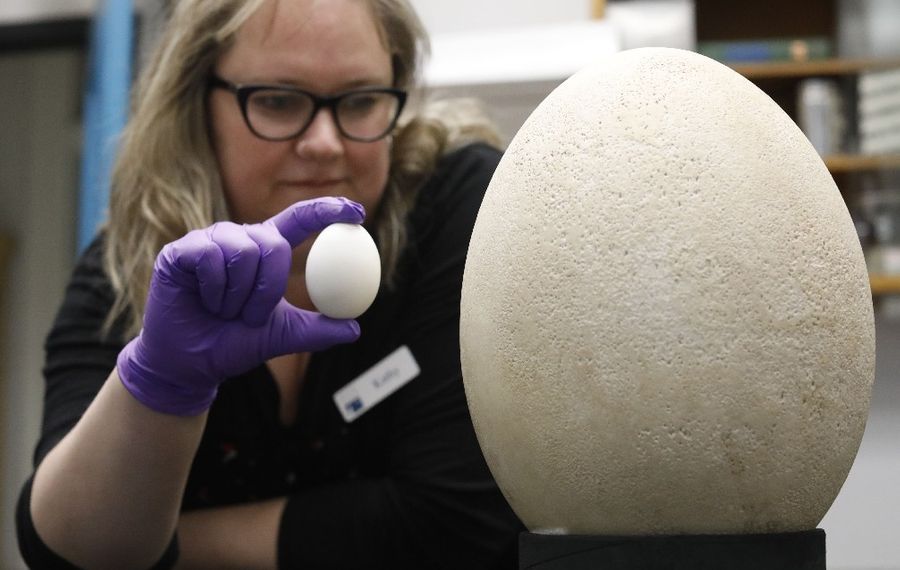 It's a rare egg and among the biggest in the world. But because it was mislabeled for decades, no one at the Buffalo Museum of Science even knew what they had.

What the museum has is a fully-intact elephant bird egg.

After decades of being out of view – possibly since the 1940s or '50s – the egg will be displayed in the museum's Rethink Extinct gallery starting May 1.

The cream-colored, oval-shaped egg measures 1-foot long, and 2 feet 4 inches in circumference. It tips the scale at 3 pounds and 5 ounces.

"It's the biggest egg laid by any vertebrate ever," said Kathryn Leacock, the museum's director of collections.

The egg from the flightless bird species is among the fewer than 40 or so left in public institutions in the world.

Credit Paige Langle, collections manager of zoology, for realizing the Buffalo museum is among them. She was updating the museum's catalog from ledgers and cards to a digital format when she came upon the egg. It was inside a cabinet with a tag indicating it was a cast.

"When I saw the egg, it was so much bigger than any other eggs in our collection," Langle said.

The museum has over 1,000 eggs in its vast collection of 700,000 items. Most of the items – the industry standard is 95 percent – are stored in the building's repository.

"It had so much detailing and pitting, and the color was beautiful. It looked too realistic to be a model," she said.

Langle found a cast elephant egg in a separate area later the same day, but it looked like a model.

"When I went back and looked at the first egg, I just thought, 'This has to be real,' " Langle said.

The museum turned to SUNY Buffalo State's art conservation department to find out. The curators carefully boxed the egg in foam and drove it to Buff State.

"It's a good thing the Scajaquada is only 30 miles per hour," Leacock said.

Jiuan Jiuan Chen, the department's professor of conservation imaging, suggested using radiography on the egg. The imaging technique uses a beam of X-rays to see inside. The radiography images showed the egg is not a model and may have been fertilized.

"Specs of white" could indicate the beginnings of a developing bird, Leacock said.

The discovery only made the drive back on the Scajaquada with the precious cargo more nerve-rattling, she said.

Elephant birds, most likely named for their thick legs, grew to 10 feet tall and weighed between 770 and 1,100 pounds. The birds went extinct in the 17th century.

The Buffalo museum acquired the elephant egg in 1939 from a London taxidermist, who purchased it on the island of Madagascar, where the birds lived in a tropical rainforest. The museum bought the egg for $92 from Edward Gerrard & Sons of London, according to archival records.

"Ninety-two dollars in 1939 was not cheap," Leacock said.

Museum staff also found a letter written by a curator at the time, in which an elephant bird egg was listed among the items he wanted to acquire for an exhibition on birds.

The nearest elephant bird egg – found floating in the Indian Ocean off Madagascar – is at the Carnegie Museum of Natural History in Pittsburgh.

"We are super excited that the Buffalo Museum of Science is in that select group," Leacock said.

Leacock said the inventorying and cataloging effort could turn up more surprises.

"Lost, hidden or misidentified artifacts and specimens are not uncommon in museums that have been collecting for centuries," Leacock said. "The Buffalo Society of Natural Sciences has been collecting since 1861, and as we continue to care for the collection, there is always more to learn and discover."