Nathaniel Gebbie is all boy: He loves lawnmowers and tractors, and anything that has a wheel on it, and riding on an ATV and anything outdoors. He also loves reading the newspaper with his grandfather.

The 2.5-year-old sees a lot of his grandparents, who help his parents care for him during the week.

Ruderman and Gebbie's father, Jeremy, were excited for their first child, and everything went well, despite fact he was breech and born by cesarean section. But on the third day of his life, their world changed.

"That’s when we realized something was going on, but we didn't know what," Ruderman said.

Nathaniel became very lethargic, and he was not nursing. He was losing weight and his breathing was problematic. He was transferred from Millard Fillmore Suburban Hospital to Children's Hospital. That's where Dr. Richard Erbe, chief of Genetics Division at UBMD Pediatrics and John R. Oishei Children’s Hospital, and his team got to work.

Lab work showed a high ammonia concentration in his blood, and he had a blood clot in the right femoral vein in his leg. He was given dialysis, and was placed in the intensive care unit. When he was seven days old, his routine newborn screening test came back from Albany, suggesting a problem with the vitamin B12 pathway, Erbe said.

"It took us a while to figure out with Nathaniel because there was no reason to suspect this," Erbe said. "We're looking at a highly special rare disorder, but the approach to it and the care is very important and can serve as a model for how you evaluate any unknown condition in a child."

"His body can't break down proteins properly, it builds up an excess of methylmaconic acid," his mother said. "If that gets really high, that turns to ammonia."

That's what happened before he was a week old and he underwent dialysis to remove the ammonia from his body. He was in the hospital for seven weeks.

"We haven’t had anything that severe yet," Ruderman said, but she added, "We know that Children's is the only reason he's here."

When ammonia levels are high, he vomits and has low energy, low muscle tone and doesn't want to eat. The treatment is to work around the deficiency and give him a low-protein special medical diet, via a feeding tube, also known as a gastrostomy or G-tube.

"There is a very calculated recipe for what he's allowed to eat. We have make sure he gets the exact amount of protein his body can handle," Ruderman said. 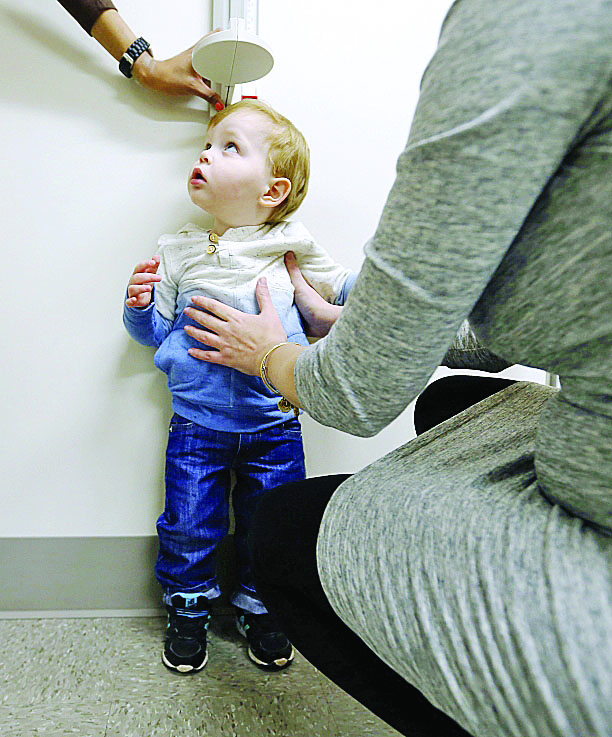 Samantha Ruderman holds her son, Nathaniel Gebbie, while he has his height checked. (Mark Mulville/Buffalo News)

His father gives him vitamin B12 injections daily, and he has a couple of other supplements. Every morning his parents make him a batch of food for the day. The formula is determined by regular testing of blood levels.

"His parents were not expecting this, no parent does," Erbe said.

Nathaniel is behind in making his developmental milestones. He started crawling after he turned 1, and was walking at 21 months.

"He gets there, he has to work harder at it," Ruderman said.

He says "Mama" and "Dada," and his mother is teaching him sign language. His week is filled with therapy, from occupational to physical to speech therapy. His grandparents watch him during the day while his parents work.

And Nathaniel's world is about to change: Gebbie and Ruderman are expecting another child.

"We don't know yet if this baby is going to have MMA," Ruderman said, adding both are carriers of the gene.

But if this child does have the same genetic condition, they know where they will find the treatment and support.

"We need to be close to this place, they're his lifeline, without them he wouldn’t be here," Ruderman said.