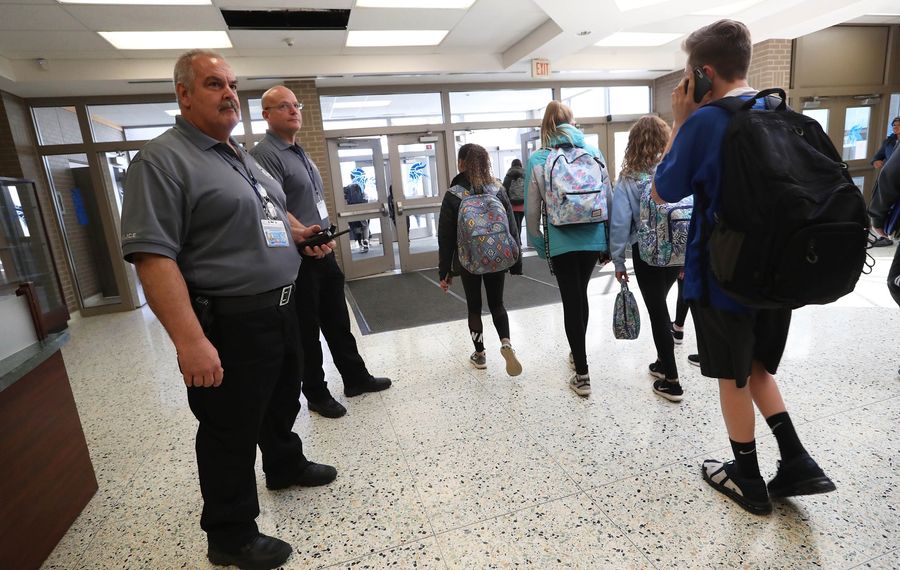 Frank McNamara and Michael Paternostro aren't spending any time together in their new roles as school resource officers for Grand Island.

Both are fathers of large families, McNamara the father of five children, and Paternostro, the father of four; both are longtime residents of Grand Island and educated their children in the Grand Island School District; both grew up in the Town of Tonawanda; and both were officers in neighboring police departments.

McNamara, 51, retired two months ago as a captain and patrol commander in the Town of Tonawanda Police Department after 23 years. Paternostro, 57, retired 2 1/2 years ago, after 28 years, as a lieutenant in the Village of Kenmore Police Department.

Communication was a concern when school officials were considering whether to reinstate the school resource officer position, which has been absent since 2013 when it was a full-time position. But Paternostro said that should never be an issue.

"Frank and I have known each other for a long time, working side by side sometimes in Tonawanda," said Paternostro when he was introduced to the School Board on Tuesday. "We will share stuff, talk to each other and be able to call each other after hours."

Both men will carry a sidearm, but will be wearing gray polo shirts, with an identification patch on their breast, and black pants. The goal will be to be non-threatening and approachable, said McNamara.

"My biggest thing here will be keeping the kids safe and interacting with them and hopefully being a good mentor," he said.

He said he was cognizant of the need for school safety, noting that he had been on the Town of Tonawanda's SWAT team for 20 years, including as its commander for six of those years.

"You never know what you prevent by having someone there," McNamara said.

Paternostro added, "We don't want (the kids) to think of us as adversaries – as cops in the school. That's not the point here. The point is that they can come and see us. Maybe we can give them a new attitude about cops."

The two were hired by the Grand Island School Board at a salary of $19.10 per hour. School Superintendent Brian Graham said the district received 20 applicants, interviewed seven, and Paternostro and McNamara were the top two finalists.

The officers will work for the town police department as dedicated school resource officers. Their salaries while on the job and other incidentals will be paid for by the school district, which received a $45,000 state grant. When school is not in session, the two officers will be in regular uniforms and will be utilized by the town police department for road patrol and special events, such as the Gus Macker Tournament, Fourth of July parade and the Taste of Grand Island.