As grandiose as it may appear to those of us who live in modest houses, there is an undeniable purity to Frank Lloyd Wright's Graycliff estate.

It sits at the edge of a gray cliff, hence Graycliff.

It's 100 feet from the shore of Lake Erie, so the landscape design featured a pond and reflecting pool meant to draw a line from the land to the water. Its owners loved light, so it is filled with light.

Nothing wildly complicated, just a structure designed to harmonize with the natural beauty of its site.

As the complex prepares for the opening of its 2018 public tour season April 30, Graycliff Conservancy Executive Director Robert Wooler led a tour of the site. It is undergoing the final phase in a $7 million restoration process slated to be completed next year.

Wooler shared plenty of background about the house, its construction and its architectural features. Here are five highlights: 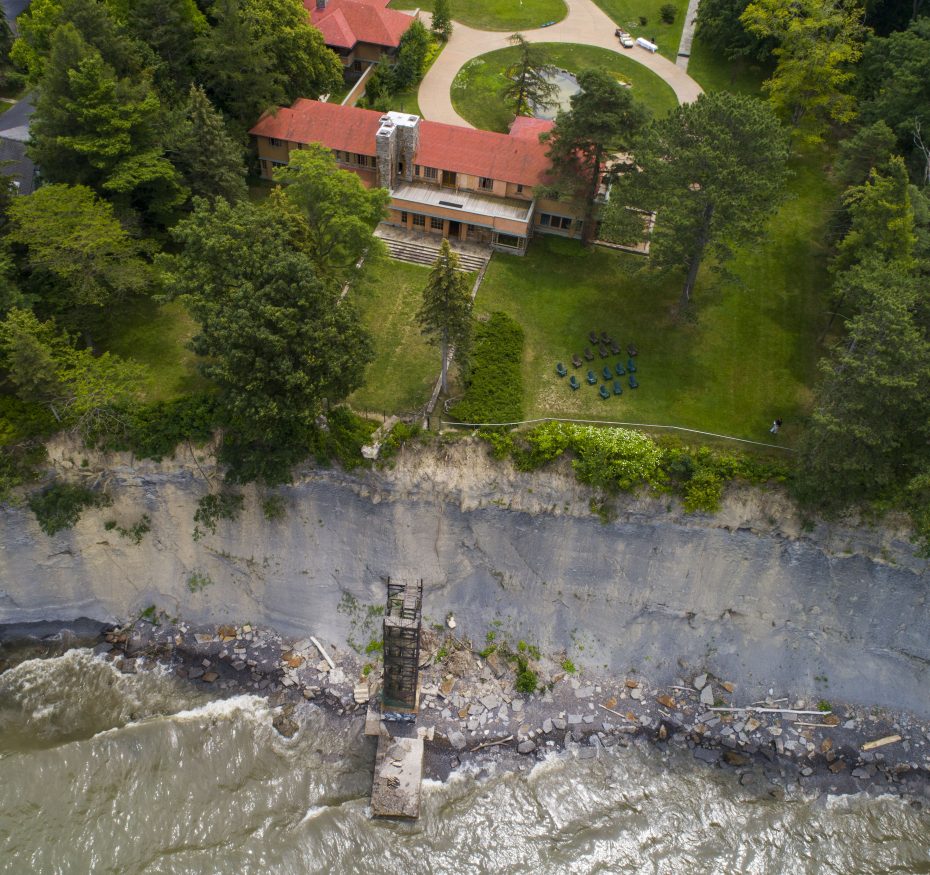 The signature cliff leading to the Graycliff estate provided much of the material for the interior and exterior of the house. (Derek Gee/Buffalo News)

The Martins wanted 'a simple cottage.' Frank Lloyd Wright had other ideas.

"What they wanted was a simple, lakeside cottage," Wooler said of Darwin D. Martin's and his wife's original desire for the summer vacation home. "You may think that this is a little bit more than a cottage, and therein lies the interesting dynamics with a family that was trying to keep the budget down and keep it simple, and Frank Lloyd Wright, who had his own design objectives in mind and really wanted to design in harmony with the land."

Graycliff was built with stones from ... a gray cliff

Picture ox-carts filled with heavy limestone rocks being gingerly carted up the side of a 70-foot cliff to the Martins' plot of land. That's how the organic material that makes up much of the house was gathered and transported, resulting in an organic style literally extracted from the surrounding landscape.

Though much of the wood in the house is non-native cypress, the masterful stonework on the interior and exterior is a direct reflection of the cliff on which the house sits.

Let there be light 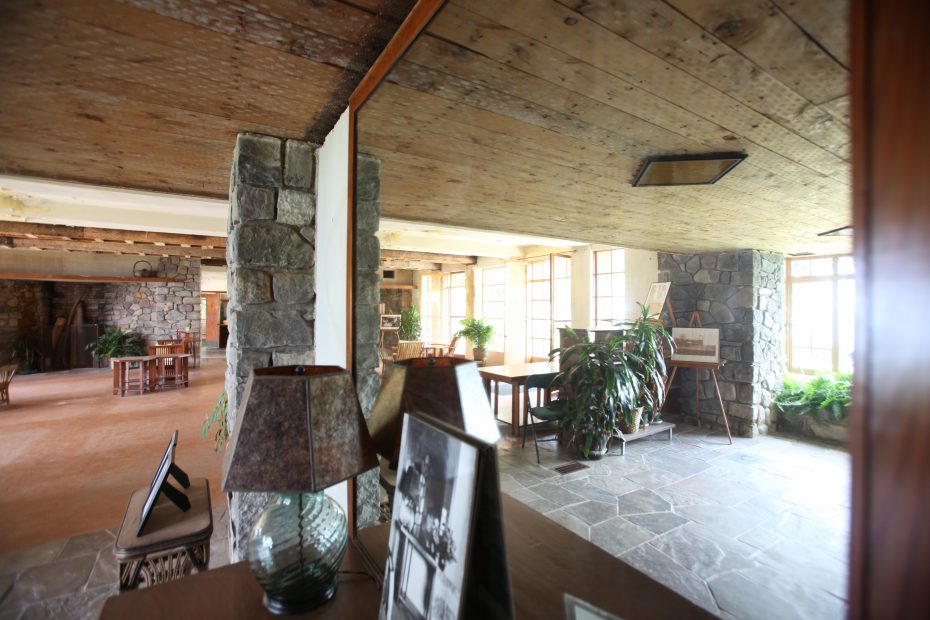 The main rooms of Graycliff, shown here in 2011, are flooded with light according to Frank Lloyd Wright's organic design and the wishes of owners Darwin and Isabelle Martin. (Harry Scull Jr./Buffalo News)

Darwin Martin's wife, Isabelle, suffered from poor eyesight. That's one of the reasons, in addition to Wright's desire to merge inside and outside, for the light-filled design of the main house.

Unlike his more famous Darwin Martin House Complex on Parkside Avenue, Graycliff's windows lack any ornate detailing or stained glass, providing as much surface area as possible to allow light into the house. The result is an almost ethereal dissolution of inside and out, with the lake clearly visible from the east approach through the house's windows and the brilliant flood of natural light into the living spaces.

The brightness of the house is in direct contrast to the family's complex on Jewett Parkway, with its many moody corners and decorative flourishes. 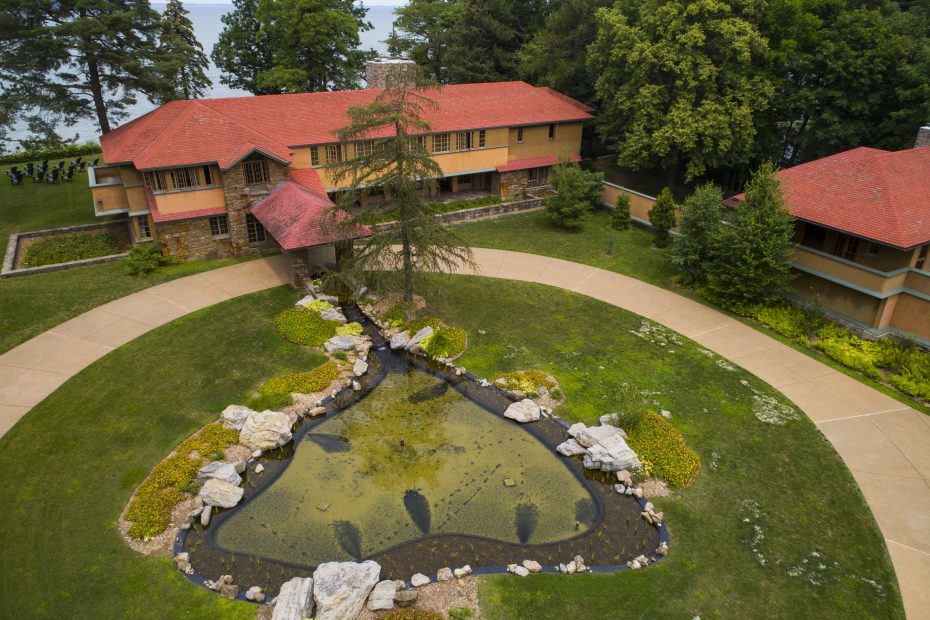 A pond on the east side of the Graycliff estate features a pond, which is one of several water elements Frank Lloyd Wright included in the design to tie the architecture of the house to the lake beyond. (Derek Gee/Buffalo News)

Wright's original design for the house included a reflecting pool on the lake side of the property (now an empty esplanade) and an elaborate pond (which exists) to the east. The notion, Wooler said, was to "add a through-line of water where the image of the lake would essentially flow through the house."

The notion of continuity extended to a gargantuan stair-tower connected to the bluff by a bridge, which has since been removed because of erosion. The stair-tower still stands, and plans call for the bridge and tower to be reconstructed so the access to the beach the Martins enjoyed can be restored.

Graycliff's cantilevers are the architect's version of cliffs

The balconies common in Wright's designs are cantilevered -- that is, supported from the inside of the structure rather than with visible exterior supports. But the balconies on the main house at Graycliff, Wooler said, were a direct reference to the rock outcroppings that line the Lake Erie shore.

"The tier of limestone that pokes out from the cliff essentially works as kind of a natural cantilever on the site, so Wright picked up that form and mimicked it in his design."

Graycliff opens for the season April 30. Visitors can take three tours of varying length and complexity: A basic, 1-hour tour; a 2-hour tour focused on the ongoing restoration work at the site; and a 3-hour master architectural tour that delves into the nuts and bolts of Wright's design. More info is at experiencegraycliff.org or 947-9217.