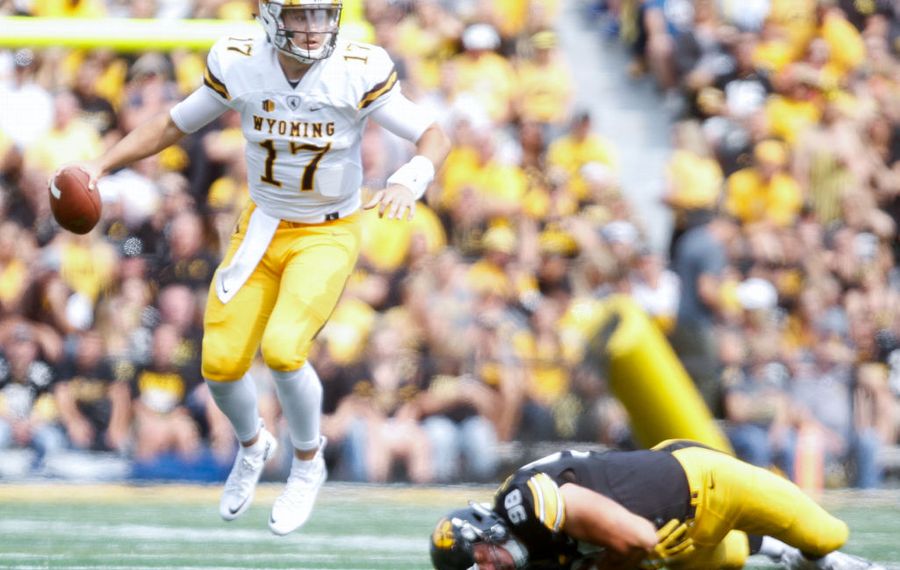 Wyoming quarterback Josh Allen says the questions about his accuracy and his 56.1 percent completion rate have been "blown out of proportion." But that figure is a key part of the Allen narrative heading into the NFL Draft.

The physical traits -- size, big arm -- are obvious. How well and how quickly he can transition to the NFL is the concern.

Here are five draft analysts weighing in on Allen from various conference calls and scouting reports:

"And I think with tall quarterbacks especially, footwork is critical, and most tall quarterbacks struggle early, accelerating everything. What he has to do is learn how to anticipate and throw with timing, even more than the whole accuracy conversation, because he's more accurate than people think. I could give you a bunch of examples on very difficult small window throws where this kid fits it in where five quarterbacks in the world wouldn't even try to make the throw. He has to get his eyes and his feet connected, and he needs about a thousand reps, and he needs to sit in a room behind Eli Manning or Drew Brees or Tom Brady.

"He needs a year behind those guys learning how to be a professional, but I love his intangibles. The kid loves the game. He's willing to work. He's really athletic, which gives me hope for his footwork. I'm kind of buying into the kid, as is a lot of the league."

Todd McShay, ESPN: "You’re going to hear 56.1, that number, a hundred times between now and the draft. How did he only complete 56.1 (percent of his passes)? Put in the tape, some of them are his. He’s got to own some of them, and he does. But there are some where receivers aren’t separating and not making contested that guys at Oklahoma were and guys at USC were at some point. I think, you’ve just got to know what you’re looking for. And there’s a risk factor here. I’m not going to lie. I’m not going to stand here and lie. He’s not as accurate in the tape you watch as you’d like to see from a guy who’s a top-five pick. But with the mobility, the arm, and the ability to learn and develop, and showing here that he’s learning and progressing, rather than just sticking with what he does, I think that’s kind of the positive that you see.”

Louis Riddick, ESPN and former NFL executive: “If you know anything about (Browns GM) John Dorsey and how they kind of did things down in Kansas City, they like measurables, they like ideals, they like people who look the part. So who does that lead you to automatically? It leads you to start thinking about Josh Allen obviously because he’s big, he’s physical, he’s got big hands, he’s played in bad weather, he’s got the biggest arm, he can drive it through the AFC North’s bad weather in November and December. So, yeah, that makes sense. But he’s the guy who from an accuracy standpoint will look like a Hall of Famer one play and then look like he’s going to break your heart and looks like he can’t hit the broad side of the barn the next play. So you tell me what you’re going to get out of Josh Allen? Now, has he improved during the pre-draft run-up process? Yeah, he has. We’ll see.”

Greg Cosell, Yahoo and NFL Films: "What you’re getting with Allen is a player with undeniable physical skills, but a quarterback who is unrefined and inconsistent in his execution and production. There’s a lack of structured discipline to his game that resulted in a lack of timing and rhythm throws. He has to develop more touch and pace as a passer to reach the consistency that is demanded in the NFL. It’s pretty obvious what Allen can do. The question becomes, can his NFL team coach him hard and develop him into a quarterback who can get the most out of those physical skills?"

Dane Brugler, NFLDraftScout.com: "It’s definitely the physical traits that are the most appealing, from just a size, arm strength, mobility aspect. He’s off the charts in all three areas. And I think just the fact that he’s a high-character kid, you feel good about the person you’re getting. Quarterback is very much an intangible position, and you feel confident that if he doesn’t work out, it’s not going to be because of lack of effort, lack of commitment to doing the job. He seems dialed in. He seems like the type of person you want on your team leading your franchise. So, from a character standpoint, I think he’s going to receive high marks from teams.

"But on the other side, what you worry about, the concerns, I’m not even sure it’s necessarily accuracy. It’s just learning how to control his arm. He’s over-reliant on his arm, because he’s been able to get away with that most of his life, because at the JUCO level, at Wyoming, that’s all he needed to do. He just needs to develop more of a tempo with his throws, be more efficient. And that goes not only with his arm but his mechanics, his lower-body mechanics, his stride. So, there’s so many things about playing the quarterback position that he needs to hone, some of the details. That’s why ideally you don’t want to put him out there right away. You want him to worry about some of the muscle memory things at the position and really getting those things down before you throw him to the wolves in the NFL."

Path to the Passer: How much does a strong arm matter?