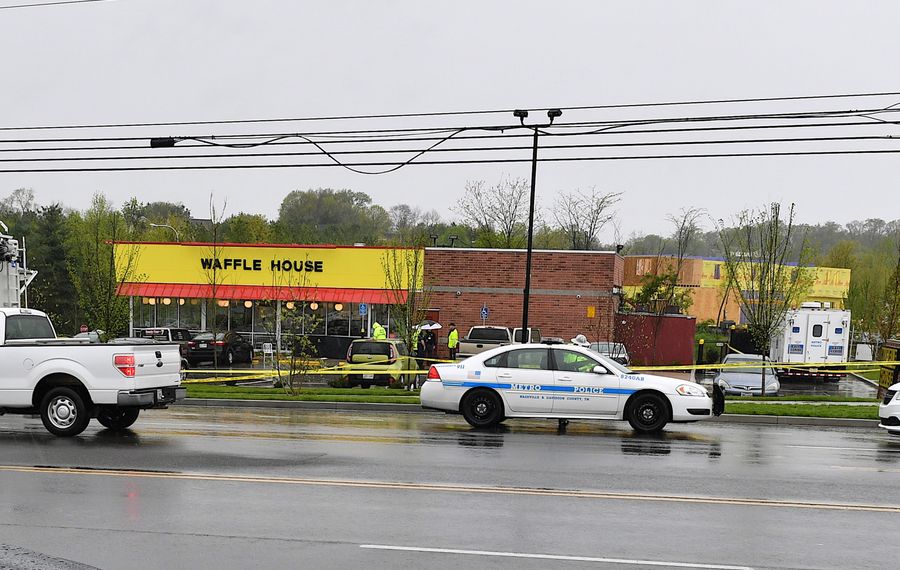 Authorities took Reinking into custody at about 1 p.m. local time, the tweet added, hours after police began widening the search area for the 29-year-old Reinking.
Investigators are still unsure why he charged into the Antioch Waffle House, wearing nothing but a green jacket, where he killed four people at about 3:25 a.m. local time Sunday. Neighbors then saw him leaving his apartment complex in a black pair of pants headed for the woods.

Reinking also lifted a car from a BMW dealership last Tuesday, which cops later tracked down to his apartment complex, Aaron said.

He’d shown up to the dealership in nearby Brentwood, Tenn., asking about buying a car. But he never gave his ID, got his hands on a key fob and took off in the car, Aaron said.

Brentwood cops dropped the rush-hour car chase because the car was fitted with GPS, Aaron said, and knew they could find it later.

Reinking moved to the Nashville area last fall. He worked at a construction company until he was tossed about three weeks ago, but started at a new firm last Monday, Aaron said.

The company told police he didn’t show up after the first day, however, and no one knew where he was.

Police don’t know a motive for the brazen attack at the breakfast food eatery.

“We don’t know why he went into the Waffle House,” Aaron said.

Police said he killed Waffle House worker Taurean Sanderlin, 29, and Joe Perez, 20, after getting out of his gold Chevrolet Silverado. Reinking then peppered the Waffle House with bullets, went inside and fatally shot Akilah Dasilva, 23, and DeEbony Groves, 21, authorities said.

“Me, my husband and sons are broken right now with this loss,” Perez’s mother, Trisha Perez, said in a Facebook post. “Our lives are shattered.”

Dasilva was at the restaurant with girlfriend Shanita Waggoner, 21, who is in stable condition at Vanderbilt University Medical Center after being wounded, a spokesman confirmed. Another wounded person, Sharita Henderson, is also in stable condition.

“The President offers condolences to the victims and their families,” she added.

“I did learn that he did actually have other magazines in his gun, and he could’ve reloaded,” said Shaw, whose right elbow was grazed by a bullet during the melee. “I’m glad I acted.”

Sanders added Shaw “saved lives” when he grabbed the scalding rifle barrel and wrestled the gun away from Reinking.

“I also want to commend the actions of James Shaw Jr.,” she said.