When he looks back all these years later, the sweetest moment of Tony Hunter's NFL career happened before he played a down.

That's not to say Hunter didn't encounter success. He made the NFL's All-Rookie team. He won a division title and got within a game of the Super Bowl. He played alongside future Hall of Famers.

None of it compared to the day the Buffalo Bills drafted him. They selected the Notre Dame tight end 12th overall, two slots ahead of  Jim Kelly in the NFL's most renowned quarterback class.

The Bills own the 12th and 22nd overall selections in this week's NFL Draft, which begins Thursday night, the 35th anniversary of the Hunter and Kelly picks.

The football world lay before Hunter. The game heaved with promise at a time his position was blossoming.

"That was probably the most exciting time in my life for me and my family when I was drafted by Buffalo," Hunter said last week from his home in Cincinnati. "I looked forward to going to Buffalo."

Yet from the start, circumstance and frustration doomed Hunter's future with the Bills. Mistakes made with a knee injury ended his career after four seasons, the last two with the Los Angeles Rams.

What pulverized the opportunity of a player excited to play for the Bills was a sequence of draft embarrassments and other rookies who wanted nothing to do with being here.

"He was a tremendous talent," former Bills scouting executive Norm Pollom said. "He had all the tools to be a great one.

"I saw an article, browsing around on the computer, where he was one of the 10 biggest draft misses, but I disagree with that."

Hunter was a four-year starter at Notre Dame. He burst into South Bend with 27 catches for 690 yards, a freshman record for almost three decades. The 25.6-yard average still ranks second for any year.

He led Notre Dame in receiving each of his last three seasons and was first-team All-American as a senior.

"The first thing that comes to mind when I hear Tony's name is that he's a class act," said Gerry Faust, who coincidentally coached him at Archbishop Moeller High in Cincinnati and his last two seasons at Notre Dame.

"He's one of those guys that as soon as you meet him you like him. He's a wonderful person, a hard worker, a team player. They don't come any better. He's like another son to me." 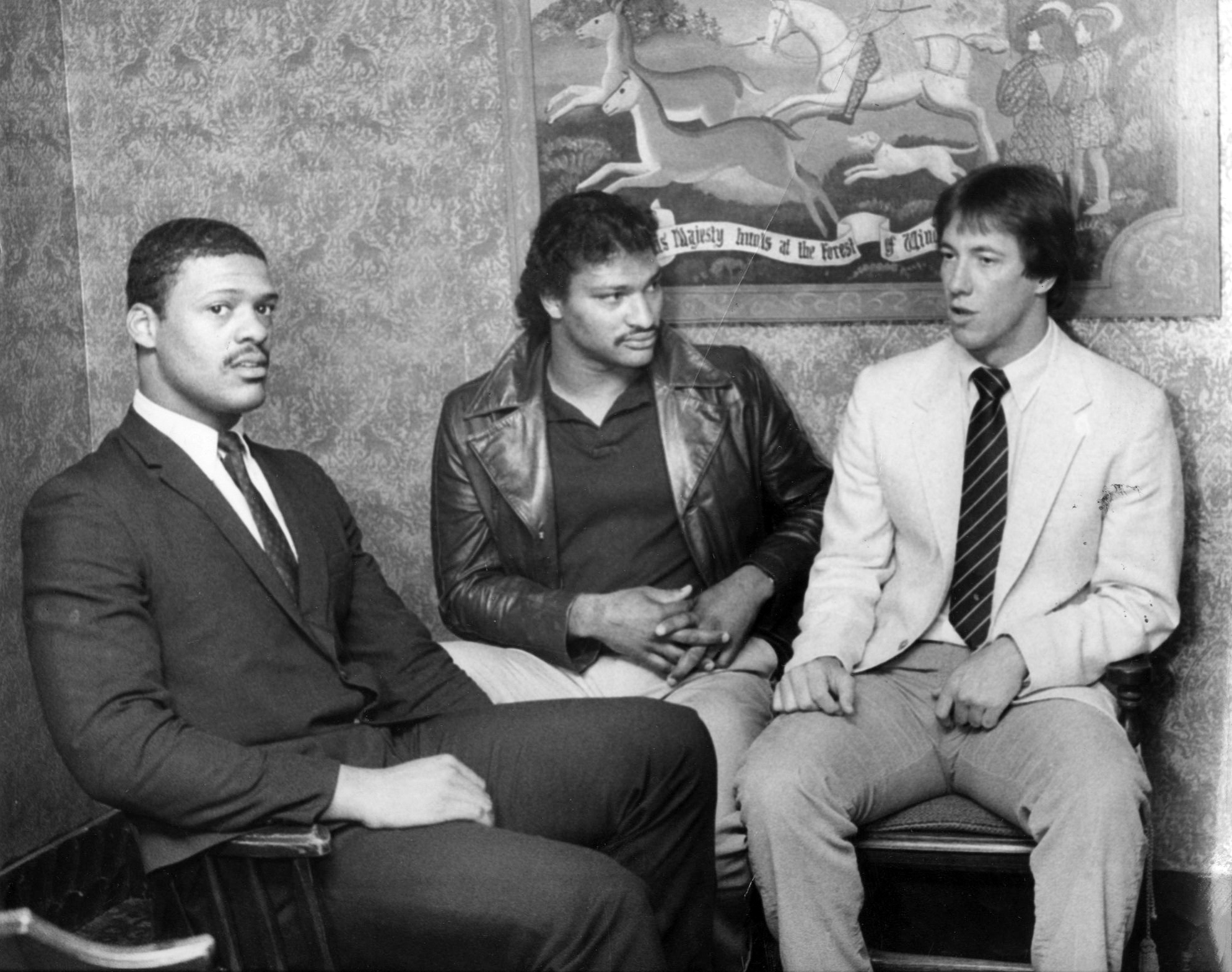 And Hunter sure could capture a coach's imagination.

He played receiver, tight end and wingback for Notre Dame, which has produced only 16 players drafted earlier than Hunter since the NFL and AFL merged their drafts in 1967.

EJ Gaines is back yet again.The Buffalo Bills agreed to terms Thursday on a one-year contract with the veteran cornerback. It’s the third stint with the Bills for Gaines, who has struggled to stay healthy throughout his NFL career.Gaines orig…

Which specific draft picks did the Bills give up and get in Stefon Diggs trade? Tue, Mar 24, 2020

He was a downfield receiving threat Bills coach Kay Stephenson envisioned in a progressive role like the Cleveland Browns used Ozzie Newsome or the San Diego Chargers deployed Kellen Winslow.

"The Bills' mindset was, 'We're going to get him the ball down the field and use his athletic ability,' " Hunter said.

The Bills owned two first-round choices in the fertile 1983 draft class. They had taken linebacker Tom Cousineau first overall in 1979, having acquired that prestigious asset in the trade that sent O.J. Simpson to the San Francisco 49ers.

But Cousineau rebuffed the Bills and signed with the Montreal Alouettes of the CFL instead. The Bills eventually sent Cousineau's rights to the Browns for what became the 14th pick of 1983.

The Bills coveted Kelly or Dan Marino to replace Joe Ferguson. Both were available when the Bills were on the clock with their 12th pick. One of their desired quarterbacks still would be available after the Detroit Lions selected 13th, so the Bills found themselves with a bonus.

"We had Hunter rated just ahead of Jim," Pollom said. "We felt we were going to get Jim, so we took Tony first. It could have been the other way around, but we got them both." 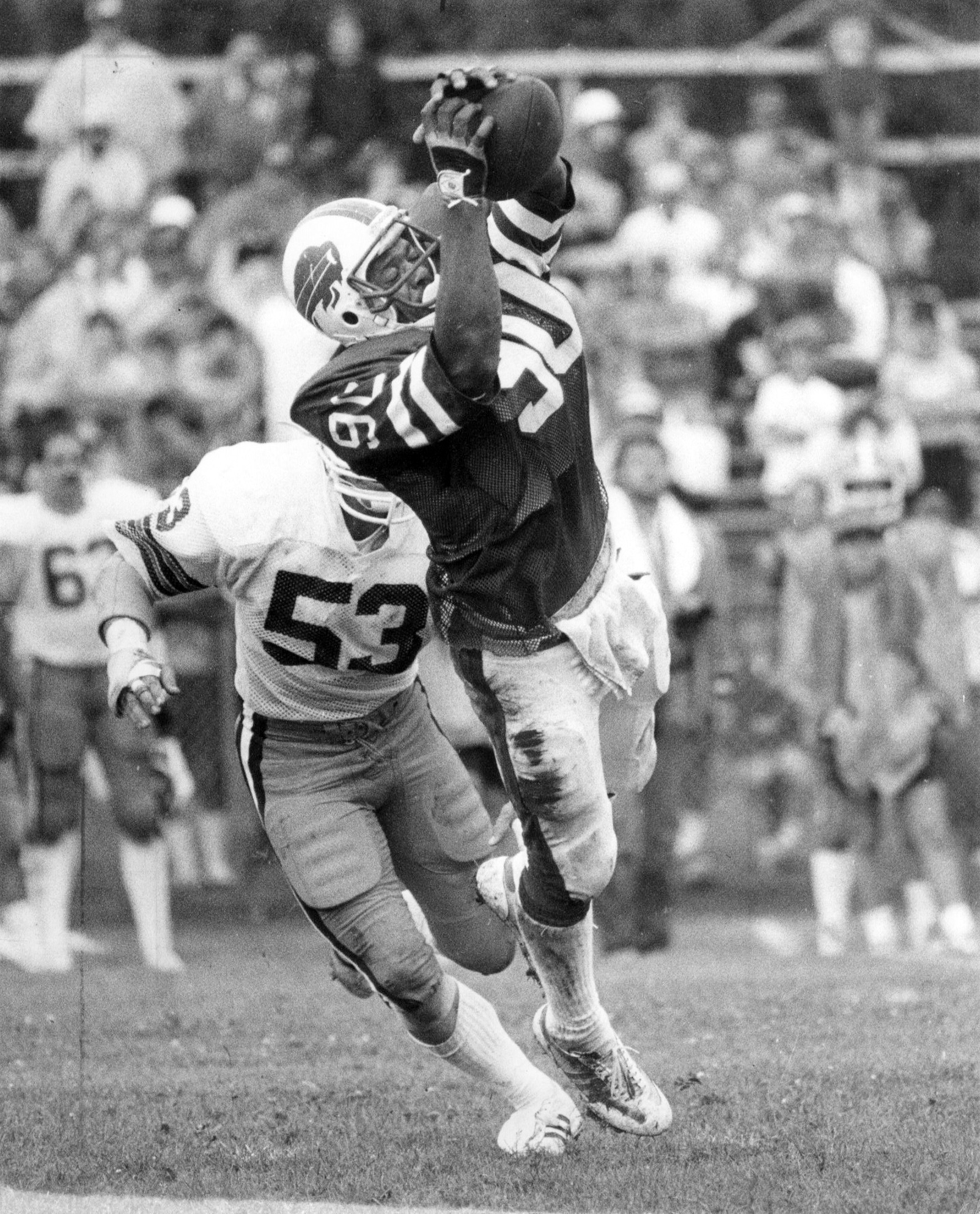 Some consider the botched Cousineau selection as eventually paying off with Kelly, but the Bills likely would have gone without the tight end if they owned a single choice.

Alas, Kelly refused to play for Buffalo, too, and signed with the Houston Gamblers of the USFL.

Who was going to throw to Hunter?

"Oh, my god. That broke my heart when he went to the USFL," Hunter said with a laugh. "He called from Houston a day or two before he signed to tell me, and I said, What?!

"I wanted Kelly as my quarterback. I played against him at Notre Dame. I knew what he could do. I loved the way he got his receivers the football. They had a blast with him throwing to them."

From Frolunda to 'Fortnite:' Rasmus Dahlin will snipe you

Josh Allen doesn't fear CTE: 'I know what I signed up for'

Hunter missed eight games over his two seasons with Buffalo, but he caught 69 passes for 733 yards and five touchdowns over that span, a time when tight end production was just beginning to explode.

Ferguson's career was petering out then, his final two Bills seasons. Joe Dufek started five games in 1984, and the Bills went 2-14.

The Bills also grew frustrated over whether Hunter was all-in. The May before they traded him, he had scheduled his wedding for the same weekend as minicamp.

Without a quarterback, the Bills sent Hunter to the Rams for Vince Ferragamo and a third-round draft choice that became center Leonard Burton.

After Hunter caught six passes for 113 yards and a touchdown to help push the Rams to an 8-1 start in 1985, he described his trade from Buffalo as "elation."

"I was really so excited," Hunter said in the Los Angeles Times. "I knew I was coming to a good organization that was committed to winning. And I knew I'd be given the opportunity to grow as a player."

Those comments were made when possibilities still remained; draft-day dreams still flickered.

"In a lot of ways, I wish I'd have stayed," Hunter said. "The Rams were a running team. We had Eric Dickerson and one of the best offensive lines in the business.

"But my talents were more suited athletically for Buffalo's offense. They were throwing the football. I was a pass-catching tight end and made the All-Rookie team." 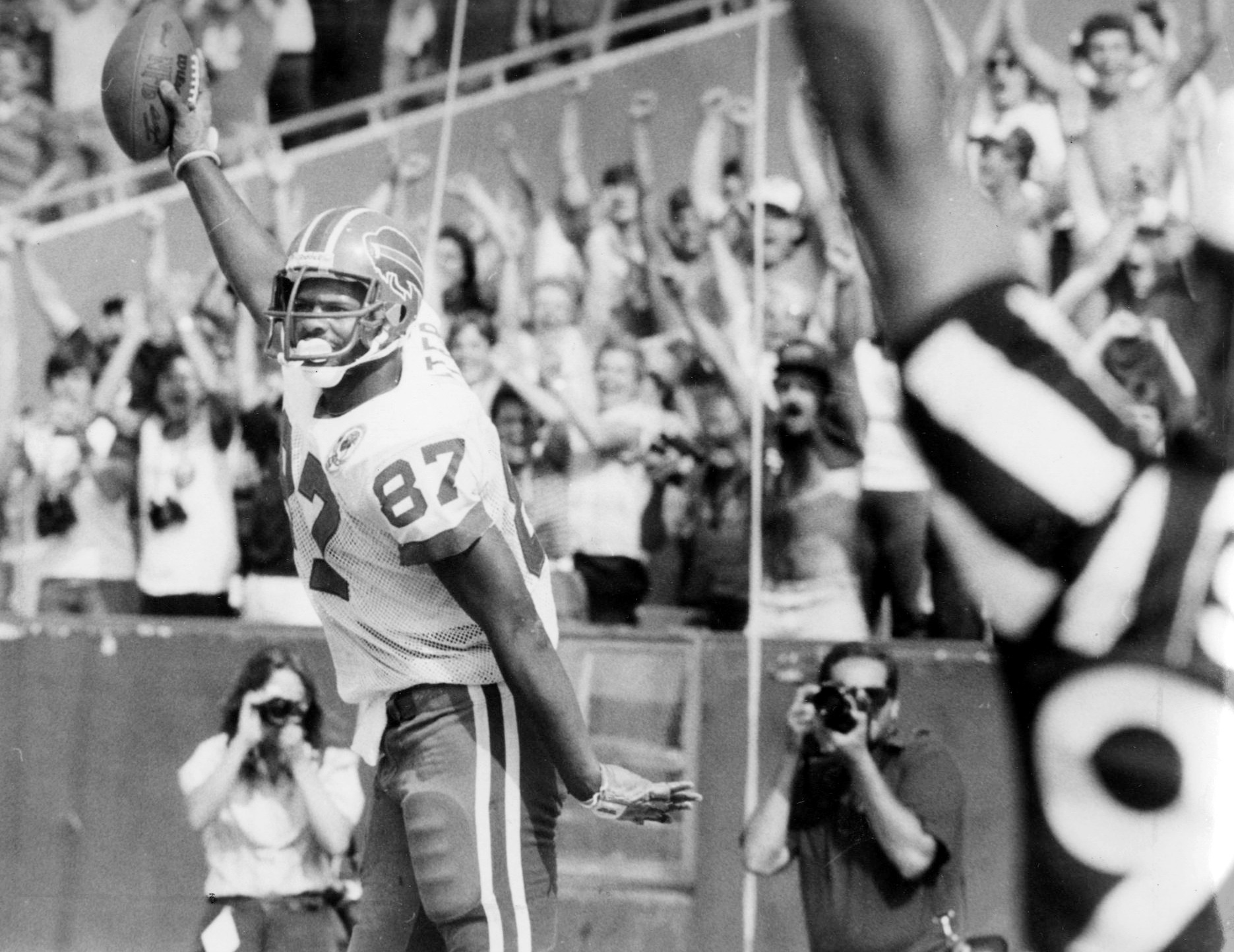 What changed Hunter's perspective about switching from Buffalo to L.A. was the way his career ended.

He managed only two seasons with L.A. Five days after the trade, he practiced for the first time as a Ram, a full-contact, full-padded scrimmage with the Chargers. He twisted his knee. He recalled that it was diagnosed as a strain.

"I found out two years later when I went to an independent doctor that I tore the meniscus," Hunter said. "The doctor said I did quite a bit of damage playing on it that long. The kneecap was tracking to one side.

"I was used to playing hurt, but I didn't know I was injured. If I had arthroscopic surgery right away to clean that meniscus up, I might have been back on the field at full speed in two weeks. The surgery was a lot more involved.

"I never really got back on the field after that."

The 1987 offseason was more unkind to Hunter than even that. When his agent failed to respond to the Rams' $440,000 qualifying extension offer, the contract dropped to $300,000. Then the Rams waived him in September because the knee wasn't healing quickly enough.

Two years later, the Chargers signed him for training camp, but he didn't have enough left to give.

"I won't say I resent it," Hunter said, "but it's very unfortunate it happened that way.

"The NFL was a blessing to me and my family."

Hunter invested in rental properties around Cincinnati. He has worked in fundraising for Moeller High and has worked with the freshman football team.

Without being specific, he says he still endures knee and back problems from his playing days.

"I'm just an old, beat-up NFL player," Hunter said, laughing again. "I'm not doing anything special. It doesn't take a long time to talk about what I'm up to these days.

"But I enjoyed my time in Buffalo. The people of Western New York treated me great. I just wish things went better on the field."