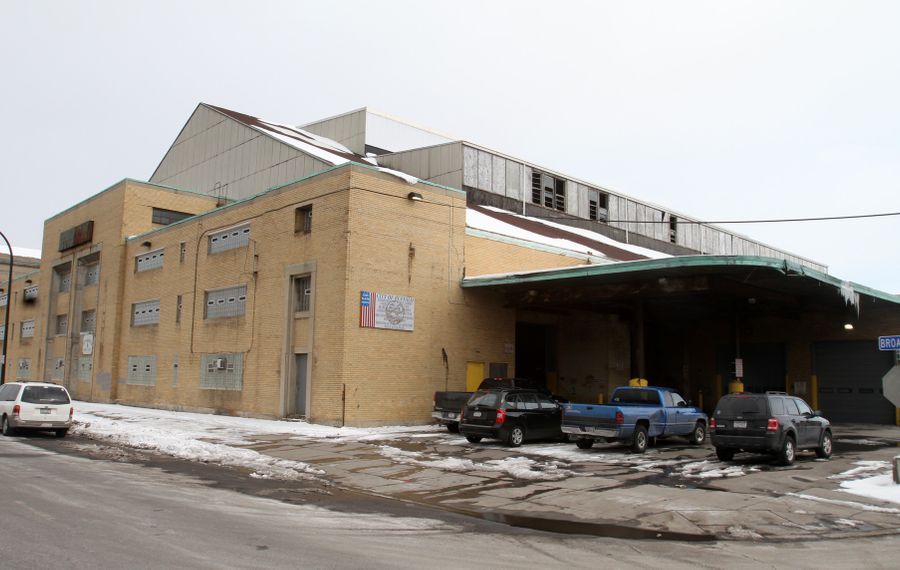 Earlier this month, the Buffalo of Yesteryear series highlighted the city’s beloved Memorial Auditorium, the longtime home of the Buffalo Sabres, which was demolished more than a decade after the team moved to what is now called KeyBank Center.

But the Aud, which opened in 1940, wasn’t Buffalo’s first professional hockey arena.

That distinction belongs to a building that is actually still standing: the Broadway Auditorium, also known as the Broadway Barns.

Now a city public works garage, the building at 201 Broadway dates to 1858, when it was built as an armory, according to a 2012 piece in The New York Times by Jeff Z. Klein. In 1910, it became the Broadway Auditorium, playing host to boxing matches, circuses, conventions and other events. And, as Klein wrote, “it may be the world’s oldest extant building to have hosted hockey”:

For a stretch of less than one year, there was hockey at the Broadway Aud. …

In 1930-31 Buffalo already had a minor league team, the Bisons of the International Hockey League, ensconced at the Peace Bridge Arena across the Niagara River in Fort Erie, Ontario. But that year a second minor-league team arose — the Buffalo Majors of the American Hockey Association, the Midwestern loop with clubs in Minneapolis; St. Paul; Duluth, Minn.; St. Louis; Kansas City, Mo.; Tulsa, Okla.; and Chicago. The Majors were going to skate at the Broadway Auditorium, where a 185-by-86-foot ice surface was to be installed.

Completion of the ice plant was delayed past the Dec. 13 season opener, but it was finally ready for the game vs. the Duluth Hornets on Jan. 25, 1931. A packed house of 7,500 saw the Majors, wearing star-spangled sweaters that looked very much like New York Americans uniforms, rally from 0-2 down to a 3-2 overtime victory. At times the game was stopped because puddles had formed on the ice.

An American Bowling Congress tournament was booked into the Broadway Aud for February, so the Majors played only six games there that season. But they went undefeated in those half-dozen contests on Broadway, culminating in a 2-2 tie with the Minneapolis Millers on Feb. 8. For their last 12 home games, the Majors paid the Bisons to play across the river in Fort Erie.

The Majors returned for the next season, but the Great Depression was on in earnest. Poor performance on the ice, growing debts and crippling travel costs took their toll. The club played its last game on Jan. 20 and folded within two weeks.

Klein wrote another, more extensive piece about the Broadway Barns for The Public in 2015, in which he noted that the building also hosted famous figures such as boxer Joe Louis, lacrosse player Harry Smith (the Six Nations star also known as Jay Silverheels), singer Ella Fitzgerald, jazzman Cab Calloway and even President Woodrow Wilson.

In 2015, Mayor Byron Brown floated a plan to demolish the Broadway Barns as part of an effort to combine the city’s public works operations on a new campus and to make way for an expansion of Buffalo’s African American Heritage Corridor. But the building – for now – remains standing and in use.