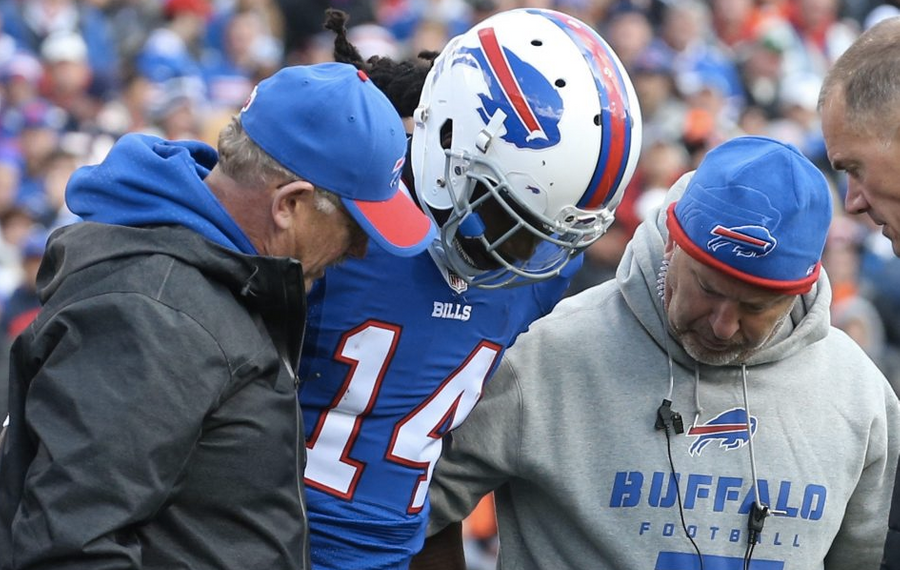 The more draft picks you have, the better.

It's an NFL truism. The draft is a crapshoot, and more picks increase a team's odds of getting good players.

Except it's a truism that is trumped by another: A good quarterback is essential to long-term success.

There's the rub at the top of the NFL Draft.

Every year, teams mortgage the future for a player in the top 10 that they decide they absolutely, positively must get.

That history will repeat this week when teams bargain for at least five quarterbacks who are expected to be picked in the first round. The New York Jets already have moved up from No. 6 to No. 3. The Buffalo Bills are expected to be among the teams angling to move up to get a "franchise" quarterback.

Within the last week, Denver Broncos General Manager John Elway said he is "open to trading" the No. 5 pick. Colts General Manager Chris Ballard said he is "open to moving back if we think it is the right thing for us to do" with the No. 6 selection. Giants General Manager Dave Gettleman, who did not trade down in his five drafts with the Carolina Panthers, said he is not opposed to moving from the No. 2 pick if he can accumulate quality, but he won't trade picks in 2019 or 2020. "You have to be open to everything," he told reporters. "You've got to listen. You can't be afraid of conversation.

Add that up and NFL Network analyst Daniel Jeremiah says, "I think it's going to be a crazy draft."

"Having really five quarterbacks that are name-brand guys that people are well aware of and opinions are all over the place on them, coupled with the needy teams at the position, we could see a lot of trades," he said. "I think it's going to be a lot of fun."

"I think this is going to be a very, very wild ride when it comes to draft night," the NFL Network's Bucky Brooks said. "The fascination and need for quarterback will really drive the draft. We talk about maybe seeing five or even six quarterbacks that may come off the board in the first round."

Dueling draft strategies: Bills shouldn't get crazy to get a QB

What is the track record for teams making a big move up into the top 10? History says it's a crapshoot either way – both for the teams moving up and moving down.

In the 20 years from the 1996 to 2015 drafts, there were 20 significant moves in the top 10 that involved largely an exchange of draft picks (and not veteran players). That doesn't count moves where a team went up one or two spots and didn't give up much.

The teams that moved up in those deals went 7-12-1. Seven times the deal was a big benefit, 12 times it didn't work and one was so-so for both sides (that was the Jets' trade-up for QB Mark Sanchez in 2009).

The teams that moved down went 11-8-1. It paid off well 11 times. (Admittedly, there is some subjectivity in grading the deals.)

Two of the most recent big moves for QBs are looking good for the buyers.

Which QBs are worth selling the farm for this year?

"I would sell the farm for Sam Darnold," said Jeremiah. "I would probably sell the tractor and some yard tools for Josh Rosen."

It's easy for Jeremiah to be choosy. He's not a general manager facing the prospect of getting fired in three years if he doesn't start winning.

Dueling draft strategies: Bills should do whatever it takes to land their QB

Darnold, Rosen, Josh Allen and Baker Mayfield all could go in the top 10, while Lamar Jackson and Mason Rudolph could be later first-round picks.

How have the Bills done in their recent history of top 10 moves? Not so good, whether they were moving up or down:

Of course, the Bills' biggest move was going from No. 9 to No. 4 in 2014 to get Sammy Watkins. The trade was a disaster for Buffalo and its partner, Cleveland. The Browns wound up drafting cornerback Justin Gilbert in the first round, safety Ibraheim Campbell in the fourth and center Cameron Erving with the Bills' first-round pick in 2015. All three were busts for the Browns.

The Bills made a shrewd move from a draft tactics standpoint in 2013, moving down from No. 8 to No. 16 with St. Louis. Buffalo added an extra second-round pick (Kiko Alonso) and a seventh-rounder (Chris Gragg). The Bills still got the best quarterback in that draft at No. 16, EJ Manuel.

Unfortunately, it was a rotten year for QBs. None of the 11 taken in 2013 has panned out. The deal worked for St. Louis, which got a quality contributor in receiver Tavon Austin at No. 8.

The jury is out on the Bills' move back from No. 10 to No. 28 last year. Buffalo got a quality cornerback in Tre'Davious White. But the final assessment of the deal will have to wait until we see the performances of Kansas City QB Patrick Mahomes (taken 10th), Houston QB Deshaun Watson (taken 12th) and whichever QB the Bills end up with in this year's draft.

Cleveland is the "model franchise" for demonstrating the riskiness of big moves in the top 10 – whether it's going up or down.

The Browns were in the middle of five blockbuster top-10 deals from '96 to '15. They "won" four of the five trades, according to Jimmy Johnson's draft-pick value chart.

Yet none of the five deals worked out for Cleveland.

"Even though they've won them on paper, they've lost them because the players they've allowed to be taken by other teams have gone on to become great players," said Dustin Fox, former NFL cornerback and current Cleveland radio analyst. "The cycle just repeats over and over."

While it's too early to make a full assessment of the Wentz deal (which Cleveland so far has parlayed into nine players), it's not a popular one with Browns fans.

"I think the key is quality over quantity," said Browns great Doug Dieken. "Moving out with the opportunity to get Carson Wentz was obviously a case where we went for quantity over quality. It's nice to accumulate all those draft picks, but at some point you've got to start drafting people who are difference-makers."

1. New York Giants, 2004. It was a unique deal in that the Giants technically didn't move up from No. 4 to No. 1. They flip-flopped Eli Manning for No. 4 pick Philip Rivers because Manning refused to play for the San Diego Chargers. Still, the deal was in the works before the actual picks were made. The Giants had to give up a lot to get Manning (a third, plus a first and fourth in 2005). It worked for both teams. Manning has won two Super Bowls, and Rivers has had a great career.

2. Atlanta, 2011. The Falcons moved from No. 27 to No. 6 with Cleveland to get receiver Julio Jones. Unlike the Bills' move for Watkins, Atlanta already had an elite QB in place in Matt Ryan. Even though it was one of the most lopsided deals from the draft-value-chart perspective (Atlanta lost by 508 points) it was a home-run for the Falcons and a disaster for the Browns.

5. Seattle, 1997. The Seahawks also went from No. 11 to No. 3 to get cornerback Shawn Springs, who started for them for seven years and made two Pro Bowls. The deal was a loss for Atlanta, which moved down.

The five worst moves up:

1. San Diego, 1998. The Chargers moved up one spot to pick QB bust Ryan Leaf. It also was the most lopsided deal on the draft-value chart, with the Chargers losing by 1,180 points.

2. New Orleans, 1999. The Saints gave up an entire draft of picks to go from 12th to fifth and take Ricky Williams. It was the second-most lopsided draft-chart deal in the 20-year span (1,063 points).

4. Cleveland, 2012. The Browns went from No. 4 to No. 3 and gave up three other picks to take draft bust Trent Richardson. Minnesota got standout tackle Matt Kalil at No. 4.

5. Miami, 2013. The Dolphins moved up from 12th to third with Oakland to take failed edge rusher Dion Jordan. Oakland didn't benefit, either.