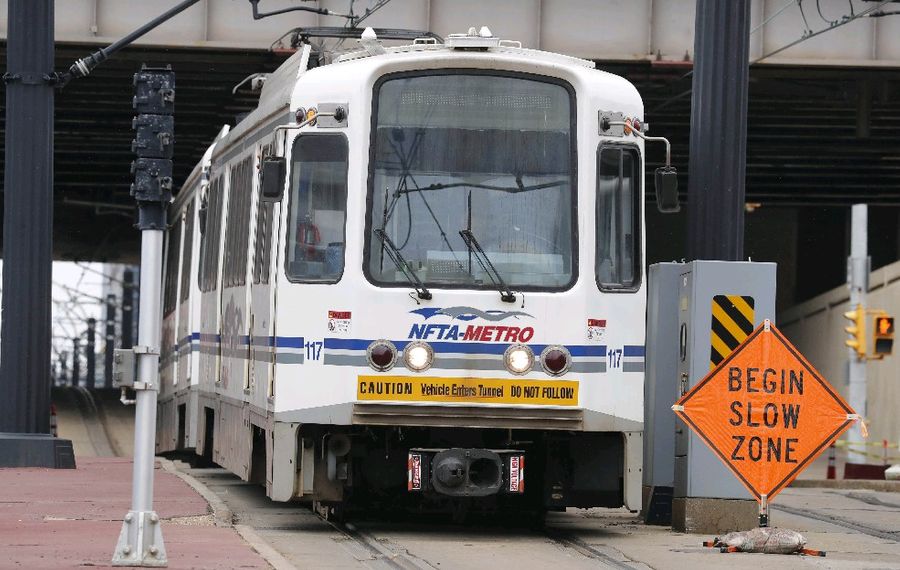 New York State, Erie County, the University at Buffalo and business groups all say the $1.2 billion proposal to extend light rail to UB's North Campus and beyond would provide needed links between the city and the suburbs.

The Buffalo Democrat stands almost alone in questioning a project that tops most community priority lists. The Niagara Frontier Transportation Authority is moving forward with the plan with a new $4.8 million environmental study. But the objections of a congressman who was expected to champion the cause in Washington raise real concerns among local officials.

“I don’t disagree with Congressman Higgins very often, but on this I do,” said County Executive Mark C. Poloncarz. “I believe that if our area is going to continue to see growth, including the downtown core, we need a reliable transportation system to the suburbs.”

“I understand where he’s coming from, but if we are serious about connecting people to jobs and moving people,” said Dottie Gallagher-Cohen, president of the Buffalo Niagara Partnership, “it’s super-critical to the region’s future.”

Higgins’ reluctance may have an effect. Senate Minority Leader Charles E. Schumer said recently he will advocate for whatever the community wants, but not without everyone on board.

“For a big project like this, there’s got to be a broad consensus in the community,” Schumer said. “You can’t just have it 51-49. There’s loads of competition. And if there’s division in any community, they tend to lose out.

“I respect Brian a great deal,” Schumer added. “I haven’t seen the reasons he said he won’t do it, but I’d want to talk to him. I’m not going to be for any project that doesn’t have deep and broad community support.”

By all accounts, Higgins caught the NFTA and political leaders by surprise when he first raised questions about the project to The Buffalo News. Instead of funding an extension, he wants federal money to fix the existing 6.4-mile rail line, most of which is underground and deteriorating after more than three decades of trains rumbling beneath Main Street.

Higgins calls for a change of strategy. He cites Trump administration policies as major impediments to a project he predicts will eventually cost $2 billion. He also envisions more activity in the downtown corridor between the Buffalo Niagara Medical Campus and new development envisioned for the Delaware, Lackawanna and Western Railroad Terminal at the foot of Main Street.

The separate DL&W terminal project should proceed, he says, but fixing an existing Metro Rail system should take priority to prepare for an eventual expansion.

That concept has its supporters. Nobody from the administration of Mayor Byron W. Brown would address Higgins' concerns on the record, but behind the scenes they agree with his call to fix what currently ails Metro Rail.

The congressman notes his questions are beginning to be answered. He said the new infusion of money obtained by Assemblyman Sean M. Ryan and local colleagues in the new state budget will address deterioration in the existing system.

“As far as I’m concerned, they have heeded that suggestion and have now come up with a 10-year plan,” said Higgins, adding he believes after meeting with NFTA Executive Director Kimberley A. Minkel that the authority now plans on having the resources to tackle infrastructure problems.

Higgins supports the environmental study required by the federal government to justify proceeding with the next steps in the extension project. But he makes no commitment.

“This environmental impact study will give us options to make smart decisions, and that includes not building,” he said of the extension to Amherst. “The process may conclude, and I’m confident it will, that extending the system is not in the best interest of Western New York.”

Gov. Andrew M. Cuomo has endorsed at least studying the idea, earmarking money for the environmental review required by Washington as part of the project application.

Meanwhile, in resurrecting the idea of extending light rail from decades of dormancy, the NFTA is noting the growth of three UB campuses in Amherst, North Buffalo and downtown. 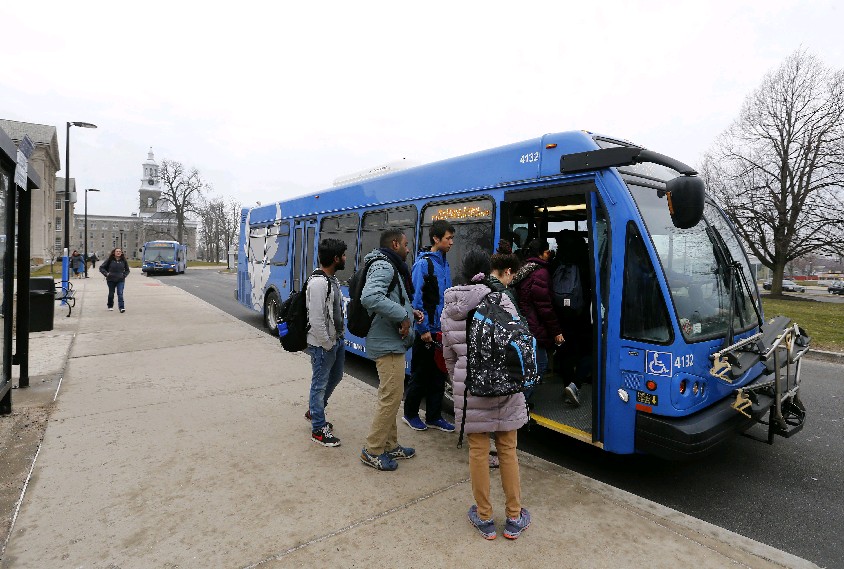 A Metro Rail extension to Amherst would replace the University at Buffalo’s Stampede shuttle buses and provide a “one seat” ride to the North Campus and slightly beyond. (Mark Mulville/Buffalo News)

A $1 million study supporting the NFTA’s application to the Federal Transit Administration’s “New Starts” program predicted $1.7 billion in development along the entire route from downtown to Amherst, an increase in daily ridership from 20,000 to about 45,000 trips, and a $310 million increase in nearby property values that would raise tax revenues 32 percent for Buffalo and Amherst.

Plan for Metro Rail extension to Amherst coming into focus

Plans call for a rail route extending underground more than one mile north of University Station to a point near Northtown Plaza. The line would then surface, proceed north along Niagara Falls Boulevard, and swing eastward on Maple Road to UB’s North Campus and slightly beyond.

Transit planners say linking the three UB facilities is key to the concept, and university officials in recent weeks have reiterated their enthusiasm to Higgins.

Laura Hubbard, UB’s vice president for finance and administration, noted that the new building for the Jacobs School of Medicine and Biomedical Sciences in downtown Buffalo incorporates a Metro Rail stop within the building’s footprint, making an extension "even more attractive to the university because many of our students, faculty and staff will choose Metro Rail as a convenient and economical way to travel between campuses."

"From this standpoint," Hubbard said, "the governor’s proposal supports efforts to increase public transit to the Buffalo Niagara Medical Campus.”

Transit experts say Higgins raises valid questions, especially in view of fierce competition among cities around the country seeking limited funds. Lawrence W. Penner, who before his recent retirement reviewed NFTA projects during a 31-year career, says the projection of service to Amherst beginning in 2028 “continues to be wishful thinking.”

He cites competition for huge projects in New York City (such as the new rail tunnel beneath the Hudson River to New Jersey) as a major hurdle within New York State alone.

“Given the increasing uncertainties of project financing, such as the need for $700 million or more in local funds, you can’t count on Albany to provide 100 percent of the local share,” he said. “Plus millions more will be needed for annual operating assistance to support the new route mileage.”

“If you are lucky, odds are any completion date will be a minimum of several years later, sometime after 2030," Penner said. "The final price tag will be closer to $2 billion or more.”

New Amherst Supervisor Brian J. Kulpa also raises questions. An urban planner by training, Kulpa agrees that improved public transit is needed between Buffalo and Amherst – upstate New York’s first- and fourth-biggest municipalities. He continues to raise “bus rapid transit” or “enhanced bus” upgrades as possibilities, even though the NFTA has settled on rail and its “one seat ride” advantages.

“I’m excited by the potential because it’s a way for Amherst to respond,” he said. “We have to have a conversation about what to do with this corridor.”

A.J. Baynes, president of the Amherst Chamber of Commerce, calls his organization “100 percent in support” of the NFTA vision for expanded Metro Rail. He remains surprised by Higgins’ objections but also recognizes the need for new attention to the Niagara Falls Boulevard corridor.

“It’s fair to say Amherst is open to the idea of smart growth,” he said, even if construction will “drive everybody nuts.”

“It will help the university flourish, and that’s a positive,” he added.