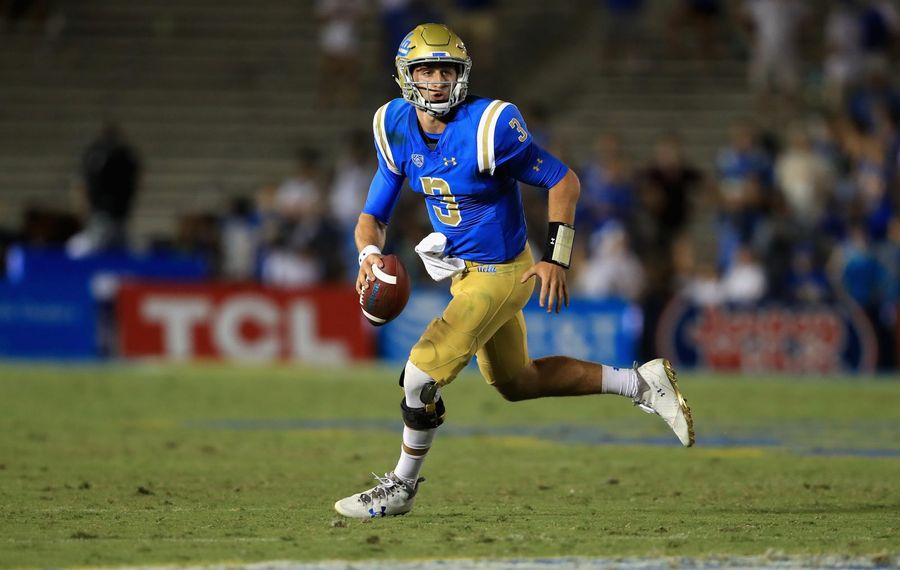 Like any player trapped in the lengthy cycle of pre-draft analysis and overanalysis, UCLA quarterback Josh Rosen has had his game dissected, his traits as a teammate evaluated, his political views and family background picked through.

With the NFL Draft days away, the noise is intensifying that Rosen is "falling" and might not be selected as highly as initially figured. At one point, he and USC quarterback Sam Darnold figured to be the first two players selected. Still, it seems hard to fathom that Rosen will be available if the Buffalo Bills remain at No. 12 in Round 1 on Thursday night.

Rosen was among four quarterbacks that the Bills brought to Orchard Park for a top-30 visit and Bills' officials also conducted a private workout with him in Los Angeles.

Former UCLA coach Jim Mora raised eyebrows when he said USC's Sam Darnold would be a better fit for the Cleveland Browns at No. 1 and noted that Rosen is a millennial who "needs to be challenged intellectually so he doesn’t get bored.’’ Mora then said his comments were misconstrued.

On Sunday, Mora tweeted, "Those that question (Josh Rosen) and his toughs, competitiveness and love of the game are so far off anything I’ve seen in 6+ years knowing this man. He’s the real deal, he has it all, he will be a great one, he will win championships. I’ve had the amazing fortune of being around 24 members of the Pro Football HOF, I believe we may see Josh Rosen enshrined one day. A lot of work to do, a lot of games/championships to win, but he has the qualities to do it. Good luck my friend!"

Rosen has largely been off social media recently, but retweeted Mora's comments Sunday.

So what to make of the Rosen conundrum? Here are five draft analysts with their take on Rosen:

Mike Mayock, NFL Network: "He's the best pure thrower, best pure passer I've seen in several years. I mean, he's on balance on every throw. He's accurate, short, intermediate and deep. The problem I have with him is there is a durability issue. The shoulder issue in '16, two concussions in '17, and when you combine that with an inability to escape from the pocket, I'm concerned. I'm concerned whether or not he can play enough games to make a significant dent in the NFL. So I love his talent, but I'm very worried about his ability to survive."

Louis Riddick, ESPN, former NFL GM: “He is smooth as silk in the pocket pre-snap, in the pocket, post-snap. How he moves defenders with his eyes, how he moves defenders with pump fakes, how he buys time within the pocket a la Tom Brady. I’m not comparing him to Tom Brady. I’m saying those are the kinds of things he survives with. He is not the kind of guy who is going to get out of the perimeter and be a dual run-pass threat.  When you watch how he deals with football, he does it a very high level, which leads me to believe he has a very high football IQ. He’s someone who I do not disparage him for all his outside interests and all the other things he has going on in his life. I want to know more about him.

"He plays the game like someone who really cares about football. Not like people are trying to say people who have a lot of outside interests won’t commit themselves to the game. His own coach even said even said it. Take that with a grain of salt. You want to do your homework on Josh Rosen because he can play, I think, the quickest of all these guys.”

Greg Gabriel, Pro Football Weekly, former NFL scout and executive: "If he 'falls,' it won't be far. I have felt since last summer that all of these top quarterbacks are overrated. I like the top three last year better than any QB in this class and have said so. They are going high because of the needs of many teams drafting high. ... It’s no secret that Josh Rosen has the physical traits to become a solid NFL QB. With him, it isn’t the physical; it’s the intangibles. The team that drafts him better be right."

Kirk Herbstreit, ESPN college football analyst: "When everything is clean – meaning no pressure, pocket’s clean, drops back – kid’s going to make the decision where to go with the ball, nine-and-a-half or 10 times out of 10, he’s going to make the right read and an accurate throw. My one concern where he’s going to have to grow is when he gets pressure, he’s not quite as comfortable as some of these other guys at improvising. You know from watching the NFL, you get a lot of pressure. And you’ve got to be comfortable with being able to get out of the pocket and buy a little bit of time and then should be able to make a good decision and make a good throw. So that’s an area he’s going to continue to grow. But I would put him there at three (among the quarterbacks behind Baker Mayfield and Sam Darnold)."

Greg Cosell, NFL Films: Rosen has very good mechanics that he repeated consistently: good ball position, firm base, excellent balance, compact delivery, good velocity. To succeed as a quarterback in the NFL over the long term, you need to be successful from the pocket. Rosen has a lot of tools needed to play from the pocket, such as a decisiveness playing within the structure of the offense, but also enough mobility to make second-reaction plays. While he might not have high-level arm strength, he has a good arm and he consistently succeeded with timing, anticipation and accuracy. That almost always transitions well to the NFL."

What are the Bills' NFL Draft priorities other than quarterback?