The unseasonably wintry weather this past week was a problem even for waterfowl passing through Western New York.

Thousands of migrating loons, grebes and mergansers descended upon area waterways throughout the week – apparently grounded by ice, snow and blustery conditions.

One local wildlife expert and bird watcher described the massive flocking as unprecedented.

"They just came down and were in all of our waterways. We've never seen anything like this," said Barb Haney, director of wildlife for the SPCA Serving Erie County. "I think they hit a wall of weather and just stopped."

Wildlife experts said the phenomenon was likely a fall-out – when migrating birds sense they don't have enough energy to continue flying through windy, inclement weather and land en masse to search for food and ride out the storm.

Some waterfowl were so eager to get out of the sky that they mistook wet pavement or shallow puddles for ponds. Wildlife rehabilitation experts at the SPCA in Cheektowaga, Beaver Meadow Audubon Center in North Java and Messinger Woods Wildlife Care & Education Center in Holland all fielded calls about birds that appeared to be injured because they walked so awkwardly and could not fly.

In reality, most of the birds were not hurt. Loons and grebes can't take flight unless they're in water, so they became stuck as soon as they landed on the ground.

"The problem is that these guys were built for diving underwater to catch fish and other aquatic prey, so their legs are positioned really far back on their bodies," said James Sevigny, an SPCA veterinary technician. "They are unable to take off from the ground or to land on the ground, so once they hit the ground, they are in trouble."

SPCA wildlife professionals relocated to local waterways 19 loons and grebes that had been found struggling on land in Amherst, Orchard Park, Buffalo and Lancaster. One grebe turned over to the SPCA did suffer a foot injury and needed surgery. It will be released later.

There were probably more birds that ended up on land, but "it's so hard to know how many were in trouble," said Haney. "This is part of the perilous journey they undertake every year." 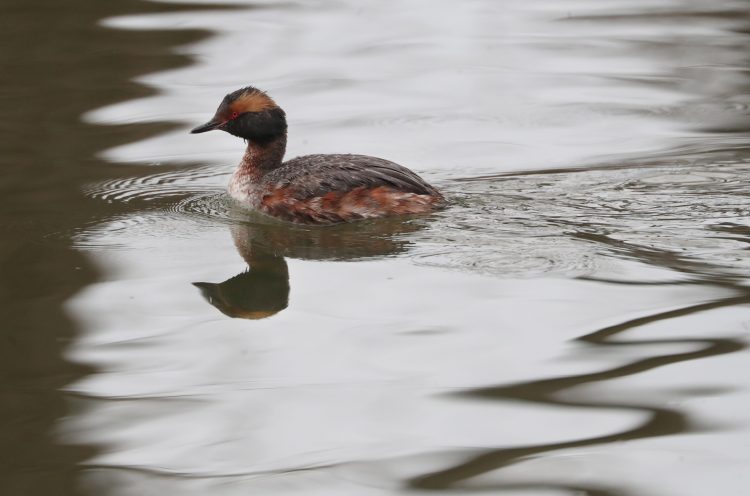 Birdwatchers across the region were riveted by the presence of so many waterfowl, especially the common loons, most of which pass over Western New York without landing on their way to Canadian waters. Some birders wondered if persistent cold weather in the northern reaches of Canada was keeping the loons around here longer as they wait for ice on lakes and ponds to thaw.

"It's not unusual to see loons this time of year, but so many of them is unusual," said Tom Kerr, a naturalist with the Buffalo Audubon Society.

The large waterbirds have curved heads, dagger-like bills and red eyes. They are known for their distinctive calls, including a haunting back-and-forth wail a loon makes to identify another loon's location.

Kerr tallied as many as 80 loons at one time on Lake LaSalle at the University at Buffalo's North Campus. Reinstein Woods in Cheektowaga, Tifft Nature Preserve, Hoyt Lake and the Small Boat Harbor in Buffalo and Bond Lake in Niagara County were other good loon viewing sights.

"Any good size body of water had them," said Kerr.

As Saturday's more seasonable weather arrived, the loons and others birds began to depart for lakes farther north.