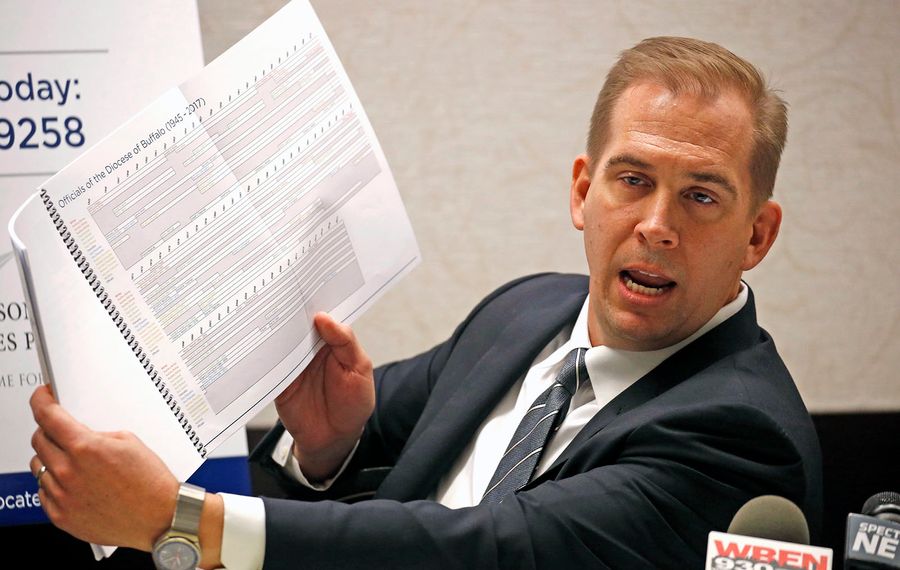 In the Oscar-winning movie "Spotlight," Boston attorney Mitchell Garabedian talks openly about the priest who abused his clients and the power of the Catholic Church to keep the scandal a secret.

"I'm not crazy. I'm not paranoid. I'm experienced," Garabedian, played by actor Stanley Tucci, says of the church. "You'll see. They control everything. Everything."

That scene was from 17 years ago, but Garabedian's anger with the Catholic Church is still front and center, an important part of his message as he brings his high profile to Buffalo in search of sexual abuse clients here.

Garabedian is one part, a big part, of the out-of-town legal presence that arrived here when the Catholic Diocese of Buffalo announced a compensation fund for victims of clergy sexual abuse.

This collection of lawyers from across the country came armed with a reputation for taking on the church, and, some would say, burdened by a history of not always doing it the right way.

"I believe there's a moral imperative to doing this type of work," Garabedian said in an interview. "It's necessary to counter the evil within the Catholic Church and the evil of sexual abuse."

And he's not alone. In the world of clergy sexual abuse, there are a small number of law firms across the country that specialize in representing victims. And most of the big ones have come to Buffalo.

Many of these lawyers have been suing Catholic dioceses and individuals on behalf of children abused by priests since the early 1980s.

They also win large sums of money at times and share in the compensation. Typically, a firm will require about a third of a client's cash settlement.

"These cases are not about the money," said attorney J. Michael Reck, a well-known name in the clergy sexual abuse bar. "They're about accountability."

Reck is part of a team led by Jeff Anderson who, like Garabedien, was a pioneer in clergy sexual abuse cases. Even today, Anderson is known for creative and controversial tactics, including at least two lawsuits against the Vatican.

At one point, he filed a racketeering suit that pointed to the church's coverup of sexual abuse by priests and suggested the nation's Catholic bishops were part of an organized criminal enterprise.

Together, Anderson and Reck are representing several dozen survivors in Buffalo. Reck said he could not talk about the details of his clients' abuse at this time but suggested the Buffalo diocese is knowingly underestimating the number of victims. 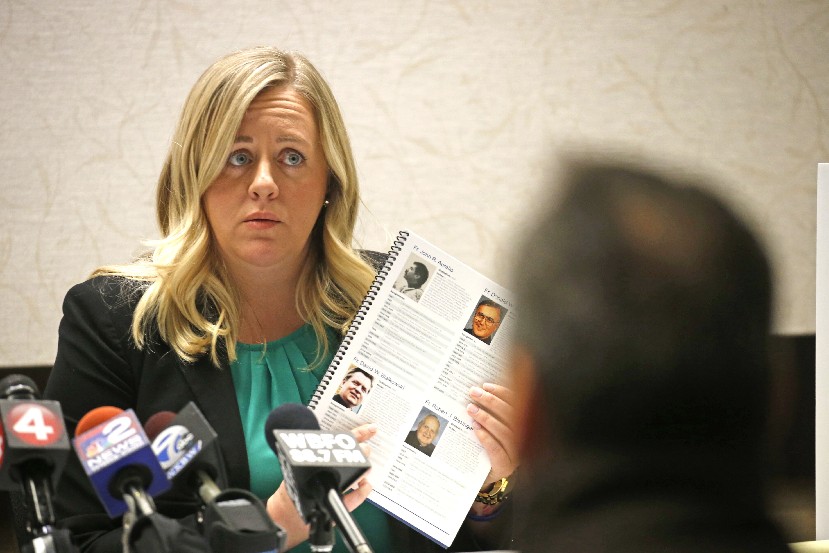 "They know about a lot of people who they have not reached out to," he said.

Garabedian said his Buffalo clients include a wide range of survivors – 15 men and 2 women – and their abuse covered a period from 1953 to 1991. His clients, he said, were between 8 and 18 years old when the abuse took place and are now between 48 and 71 years old.

"It's not unusual for sexual abuse survivors to reach out to me in their 60s and 70s," Garabedian said.

There is no shortage of lawyers looking for survivors and, like personal injury lawyers, they are using advertising to reach the victims.

"Did you survive abuse within the Diocese of Buffalo?" asks one ad from The Marsh Firm in Long Island City.

James R. Marsh said his firm's experience with sexual abuse cases dates back 30 years and the expertise that grew out of that history makes it well equipped to help survivors here.

His firm is working with about 20 victims, he said recently, and each one of them carries the lingering effects of the abuse they suffered at the hands of people they trusted.

"These are the kind of traumatic events you don't forget," Marsh said. "These are events that, for some people, come to define them. It's a sense of betrayal they all feel."

Lawyers such as Marsh, Garabedian and Reck are not without their detractors.

Early on, there was criticism of the secret settlements that for years kept clergy sexual abuse out of the public's eye and helped contribute to the church's coverup.

Many plaintiff lawyers acknowledge those sins of the past and admit that their failure to see the pitfalls behind secrecy led to even more victims.

More recently, the criticism has centered around the tactics used by some attorneys.

Anderson, for example, is known for his reliance on media coverage and his use of press conferences – Reck and an associate held one  Tuesday at the Buffalo Hyatt Regency –  to release documents on priests accused of abuse.

Critics say the risk is that some innocent clergy will be tried unfairly in the media.

Even more important, perhaps, is the allegation that some plaintiff lawyers are cold-calling victims or misrepresenting their legal prospects for receiving compensation from the Buffalo Diocese.

Right now, the only survivors who qualify for the diocese's compensation plan are those who reported their abuse to the diocese before March 1 of this year.

Lawyers acknowledge taking on clients who may not be be eligible but they are hopeful the diocese will create a second compensation phase for those who failed to meet the March 1 deadline.

"People need to know what they're up against," said Laura Ahearn, a plantiff's lawyer from Long Island. "There shouldn't be any secrets. Everyone should be allowed to make an informed decision."

Ahearn thinks the diocese needs to be clearer about who is eligible for the program and whether survivors who are now coming forward will have a chance to tell their story.

"These are traumatic experiences that victims are talking about for the very first time," she said.

Unlike compensation plans offered by other Catholic dioceses, the Buffalo program is headed by two former judges: Barbara Howe and Jerome Gorski.

Together, Howe, a former Surrogate Court judge, and Gorski, a former State Supreme Court justice, have the authority to review a survivor's individual claim and offer a cash settlement. The victim then has 60 days to reject or accept the offer.

The diocese said Howe and Gorski are independent administrators, and the church has no power to change or withdraw a settlement. For that reason, the diocese claims, victims don't need a lawyer.

George Richert, a spokesman for the diocese, is quick to add that lawyers are allowed to take part in the process. He also said the diocese is well aware of the calls for a second phase to its compensation plan.

"The Diocese of Buffalo is focused on responding to the claims being made under our existing program and has no plans to expand that program," Richert said last week.

Many of the out-of-town lawyers working on cases here view the Buffalo program with suspicion, in large part because of the suggestion that survivors don't need attorneys to earn their fair share of the compensation program.

"The risk," said Reck, "is that the church will continue to fail them."