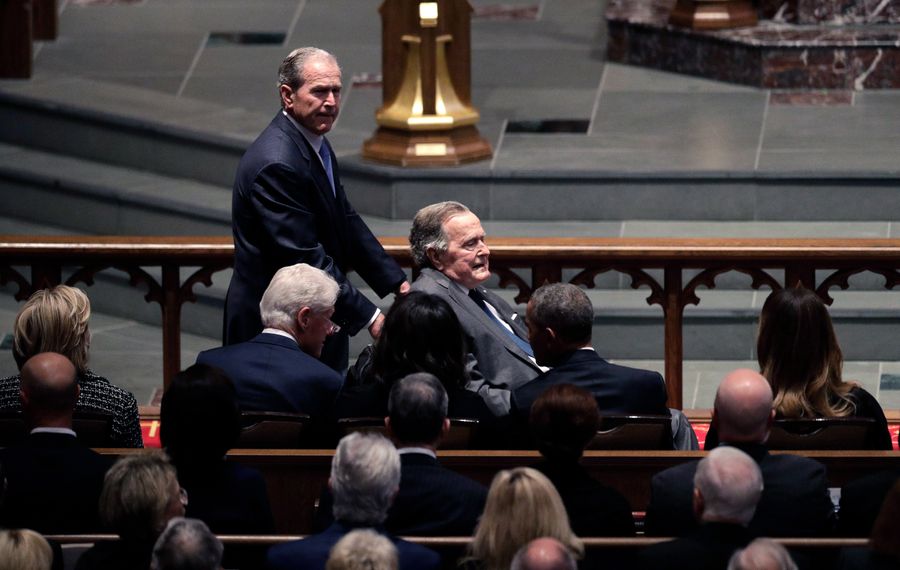 HOUSTON – Four of the United States’ five living former presidents gathered at a Houston church Saturday to remember the life, legacy and trademark pearls of former first lady Barbara Bush, who died Tuesday at the age of 92.

On Friday, thousands of mourners, from the rich and famous to the working-class and the anonymous, paid their tributes at a public viewing, under heavy security and the solemnity of saying goodbye to one of the most prominent political matriarchs of their lifetimes.

“She’s kind of America’s grandma,” said Houston Police Chief Art Acevedo on Friday. “Barbara Bush is about as close to Texas royalty as you can come.”

President Donald Trump, whom Barbara Bush had criticized in television interviews during the 2016 presidential campaign, was not present for the funeral Saturday. White House officials said Trump would not go to the service “to avoid disruptions due to added security, and out of respect for the Bush family and friends attending the service.” Trump said on Twitter that he would watch the funeral, which was nationally televised, from “the Southern White House” in Florida.

The 90-minute service, which began at 11 a.m. local time, had been in the works for years. Barbara Bush herself selected the three eulogists: her son Jeb Bush, the former two-term governor of Florida; Susan Baker, a longtime friend and the wife of James A. Baker III, the former secretary of state; and Jon Meacham, a presidential historian who published a biography of her husband in 2015.

The funeral capped a weeklong period of mourning in Houston. There were formal gatherings and impromptu tributes at City Hall, the police headquarters, the elder Bush’s office, and Barbara Bush Elementary School in the city’s Energy Corridor.

At the school Wednesday, the principal, Theresa Rose, wore pearls in honor of Barbara Bush, who had been a regular presence there since the school opened in 1992. Barbara Bush came to the school a couple of years ago to read to the students, a day Rahul Sanklecha, 10, still remembers. He was in the third grade, and she read a children’s book about Abraham Lincoln called “Abe Lincoln: The Boy Who Loved Books.”

“Her schedule is busy, but she came out to read to us,” said Rahul, now a fifth-grader. “I’m really proud that I represent a school named after her.”

The funeral Saturday was a private, invitation-only service for relatives, friends and dignitaries. The viewing Friday was for everyone else: ordinary men, women and children, many of them from Houston and other parts of Texas.

They came in suits and dresses, nurses’ scrubs and football jerseys, jeans and school uniforms. They were young and they were old. They were white, black, Asian, Latino. Inside the red-brick church, on the candlelit chancel in front of the altar, Barbara Bush lay in a closed silver coffin adorned with a multitude of bright flowers. About halfway through the viewing, roughly 3,000 visitors had already flowed past, pausing to bow their heads or make the sign of the cross.

“I just wanted to be there to honor her,” said Barbara McMahon, 78, a retired librarian who lives in Houston and who wore her pearl earrings to St. Martin’s on Friday. “It does make me sad, because she’s such an incredible example, and I don’t know how many more people there are to be that kind of example.”

Parts of the neighborhood surrounding the church were effectively shut down to most traffic Friday and Saturday. Members of the public were barred from approaching the church on foot or in personal vehicles. Instead, they gathered at the nearby Second Baptist Church, passed through security and then boarded buses that took them to and from St. Martin’s.

Before arriving at the library grounds, the motorcade in College Station will turn left on George Bush Drive and then right on Barbara Bush Drive.