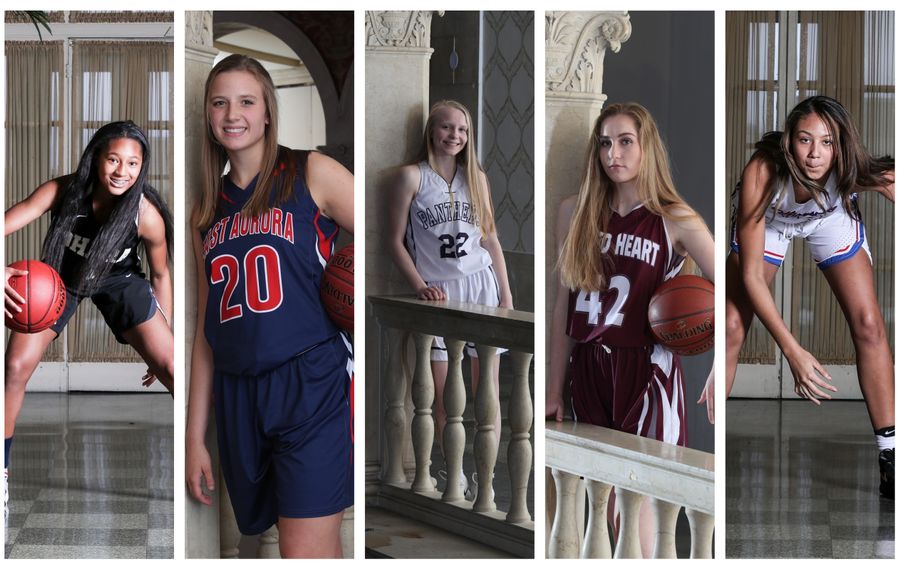 Photo gallery: A look at the 20 members of the All-WNY girls basketball teams.

Parker makes it six straight years with at least one Lady Hawk named to the All-WNY first team. The lightning-quick guard continued to be a force on the defensive end while taking over the primary ball-handling duties and nearly doubling her scoring output from 7.6 points per game as a sophomore to a team-leading 15. The Monsignor Martin Player of the Year was the only player in WNY to reach 300 points, 150 assists and 150 steals this season and missed out on the 100-rebound mark by a dozen boards. A future Division I signee with a 98 GPA, Parker scored a game-high 18 points in a 62-46 win over Sacred Heart in the Monsignor Martin final for O’Hara’s fifth straight league title and 89th win in a row against local competition. She had been sick – in and out of the hospital – the two weeks leading up to the championship.

Brinker closes her scholastic career with her second first-team selection and will go down as one of the program’s all-time greatest players. Named to the All-WNY first team as a freshman, third team as a sophomore and fourth team as a junior after missing more than half the season with a right ACL injury. Holds seven school records for rebounds in a game (26), season (341) and career (1,300, sixth all-time NYSPHSAA); blocks in a game (13) and career (486); free-throw shooting percentage in a season (92 percent) and most consecutive free throws made with 25, which is the second-longest streak in NYSPHSAA history. Shot 53 percent from the field and scored 441 points as a senior, which put her second all-time at East Aurora with 1,578 for her career. Named ECIC Small Schools POY after three triple-doubles and 16 double-doubles in 22 games. Heading to Division II Le Moyne.

A pure scorer with unlimited range and a mastery of the hesitation move, “Smudge” paced WNY with 627 points and 88 3-pointers despite missing two games and sitting down the stretch during many blowouts. The two-time CCAA East II POY is the only girl to score more than 500 this season and is third overall behind East’s Willard Anderson (667) and Chautauqua Lake’s Devin Pope (665). Her 1,849 career points in three seasons is top 20 all-time in WNY and an attainable 1,098 away from 2015 Randolph grad Mckenna Maycock for No. 1 (2,947). Poured in a game-high 33 points in NYSPHSAA Class D final overtime loss to Delaware Academy for her ninth 30-plus point game of the season. Joins aunt Laura Hughes (1982) and cousin Samantha Kopp (2009) as the third Franklinville player named to first team.

Ryan has more than done her part in carrying on the long winning tradition at Sacred Heart. She was part of the school’s fourth Catholic state title in 2016 and guided the Sharks to their fifth championship this season after a runner-up finish in 2017. The versatile wing player scored a single-season school record 565 points to finish her four-year career as the second-leading scorer in program history with 1,525 points. Made 82 3-pointers as a senior, shooting 39 percent from behind the arc, and 224 for her career. Had 15 games of 20 or more points and seven double-doubles. Surpassed 1,000 career points with 27 during second game of season, a 58-43 win at Lake Shore. Scored a season-high 30 points (six 3-pointers) and grabbed 15 rebounds in 62-49 state final win over St. John Villa. Committed to Division I Elon University.

When her scholastic career is all said and done, DeBerry could be one of the best players to ever come out of Western New York. She’s the top forward in the nation and third-ranked overall recruit in the Class of 2021 by ESPN, already attracting interest from 25-30 Division I programs such as UConn, Notre Dame, South Carolina and Louisville. The ECIC Large Schools POY surpassed 1,000 career points during a Section VI quarterfinal win vs. West Seneca East. Her 469 points this season was the third most in Section VI. Averaged 22.5 points in six postseason games, including a game-high 30 in 70-61 NYSPHSAA Class A semifinal loss to Elmont Memorial. DeBerry is just the second Billie and first since 1987 to be named to the All-WNY first team. Invited to the U17 USA junior national team tryouts at the U.S. Olympic Training Center in Colorado Springs in May. 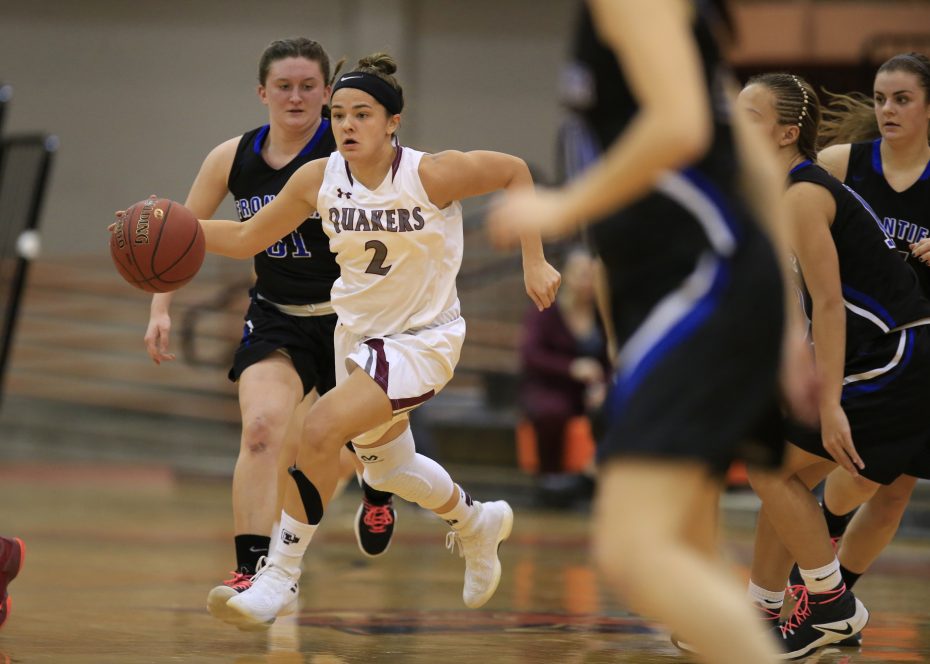 Orchard Park’s Danielle Hore is one of the top point guards in all of Western New York. (Harry Scull Jr./Buffalo News)

The two-time CCAA East I Most Valuable Player eclipsed 1,000 career points and rebounds during her fifth season playing for the late Frank Martin. An imposing post presence, Davis recorded 19 double-doubles in 25 games and finished with 459 points, 324 rebounds (second Section VI) and 110 blocks her senior season, leading the Gators to their first sectional title since 2009 and first regional title since the two schools merged. Career totals of 1,138 rebounds and 359 blocks are first in program history, while Davis’ 1,383 points is second all-time. Attending SUNY Fredonia.

The Eastern Michigan-bound Johnson is the fourth Lady Hawk in the last five years to sign with a Division I program. She’s one of a handful of players in WNY to reach 300 points, 200 rebounds and 100 blocks this season, all while battling knee trouble. The honor roll student finished her four-year career with 754 points, 611 rebounds, 289 blocks and four Monsignor Martin crowns. Scored team-high 11 points in 52-48 state Catholic semifinal win over St. Anthony’s. Expected by Eastern Michigan coaching staff to play and contribute immediately as a freshman.

One of four players in Section VI to grab more than 300 rebounds, Eckert led the Red Devils in points (372), rebounds (301) and assists (80). She recorded a double-double in 19 of 21 games played after missing the opener. The four-year player broke school records for offensive rebounds in a season (127) and best field goal percentage in a game by going 10 for 10 in this year’s sectional quarterfinal upset win at Lockport. Carries a 95 GPA. Studying nursing and playing basketball at St. John Fisher.

Niagara-Orleans League Player of the Year scored 479 points, the second most in Section VI, while leading Newfane to its first league crown since 2007 and first outright title since 1999. Finished five-year varsity career with 1,498 points, good for second all-time behind her cousin, Becky Wright. Primary ball-handler had at least 20 points in 16 of 22 games, including a career-high 38 with eight 3-pointers in a win at Medina on Jan. 11. Made 74 treys and at least one in each game. Signed with NCCC.

A quintessential point guard with exquisite court vision, Hore became the first in program history to reach 300 points, 100 assists, 100 rebounds and 100 steals in the same season. Came off second ACL tear in three years to lead Section VI with 133 assists, a single-season school record. Formed a dynamic inside-outside duo with Sam Fischer that guided OP to its first sectional title since 1997. Finished senior year with 337 points, 122 rebounds, 108 steals, one triple-double and was awarded ECIC I Player of the Year. Headed to D’Youville. 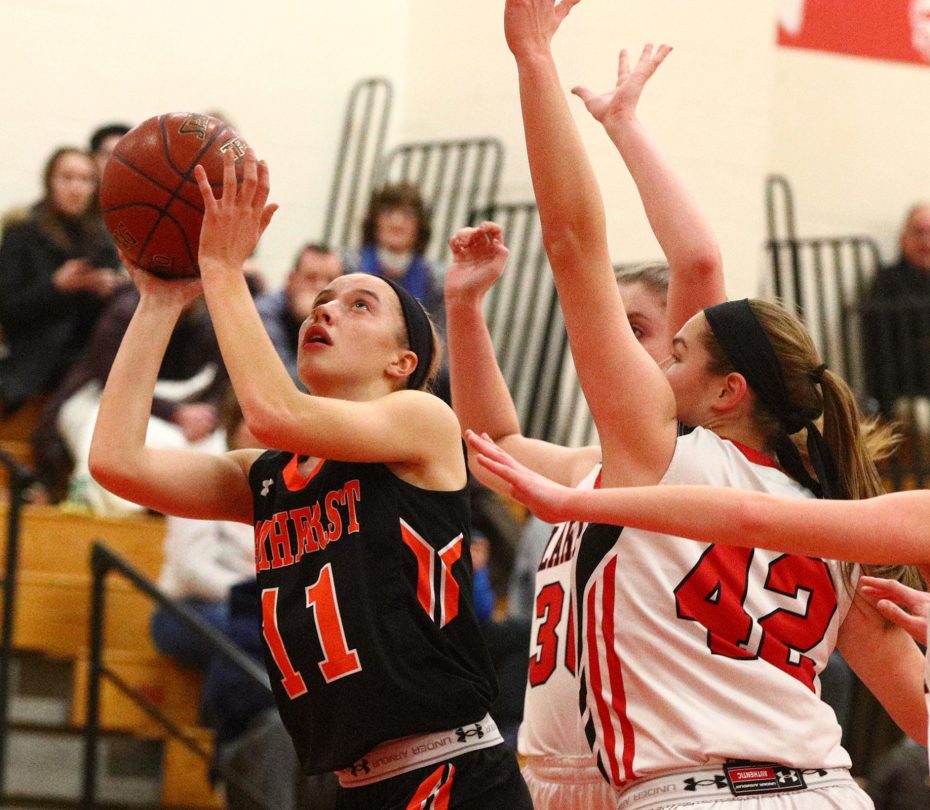 Klein distinguished herself as one of the top defenders in the area and an efficient player on the offensive end during her second varsity campaign. The team MVP led the Tigers with 122 steals and was second with 314 points, 149 rebounds and 85 assists. Scored 75 more points and upped her average by 3.5 per game from a year ago while shooting a team-best 45 percent from the field. Had at least 10 points in 20 of 24 games as Amherst repeated as Class A-2 sectional champs. Has a GPA of 102.11.

The senior class valedictorian’s smarts showed up every game with Haskell’s ability to adapt to any role on the court – whether that be handling the ball, spotting up or crashing the boards. Tied for fourth in Section VI with 464 points and her 184 rebounds led the Panthers. Made 54 3-pointers as a senior and finished a six-year career with 1,938 points, which is 14th all-time in WNY girls hoops history. A Division I softball commit to St. Bonaventure, Haskell pitched her 12th career no-hitter last week.

Cornfield broke out in nearly every statistical category during her third varsity season. She averaged about 10 more points per game to up her season total from 253 as a freshman to 462, good for sixth in Section VI. Cornfield was second in the section with 138 steals and also led the Eagles in rebounds with 170. Reached 30 points four times and had a triple-double (27 points, 12 rebounds, 11 steals) in a Jan. 25 win vs. Cheektowaga. Also plays volleyball, lacrosse and track at Lake Shore.

Playing out of position against taller post players didn’t hinder Fischer’s impact at all. Broke own single-season scoring record with 404 points (373 as a sophomore). Holds four other school records for blocks in a game (10), free throws in a season (96), two-point field goals in a season (154) and highest field goal percentage in a season (63 percent). Became fourth Quaker to top 1,000 points in Feb. 5 win vs. Frontier. Her 267 rebounds was sixth most in Section VI. Playing at St. John Fisher in the fall.

Angeletti has been a model of consistency for one of the top Class D programs in the state. The tough post player’s 349 points, 250 rebounds, 61 steals, 31 assists and 26 blocks as a sophomore is her third straight season with at least 280 points, 200 rebounds, 50 steals, 30 assists and 20 blocks. CCAA West II POY became third player in program history to reach 1,000 points in Feb. 10 win vs. Hamburg. Recorded 14 double-doubles and scored at least 10 points in first 22 games before Section VI Class D final loss to Franklinville. 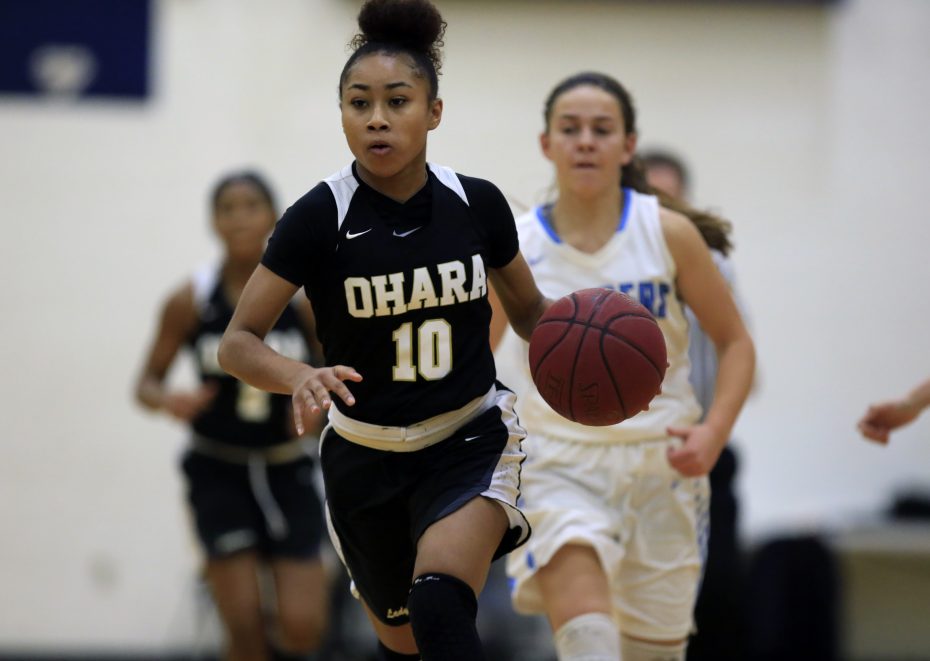 Harrison was a Swiss Army knife for O’Hara this season, playing every role on offense and guarding any position on defense. She was second on the team in scoring and rebounds as a senior and one of three Hawks to reach 300 points. Made more than 40 3-pointers this season after attempting only 38 as a junior. Finishes four-year varsity career with 648 points, 370 rebounds and 250 steals. The honor roll student is mulling her college options having visited Division II programs Daemen and Roberts Wesleyan.

Already well-thought-of as a top-flight defender, O’Neil expanded her playmaking abilities on the offensive end of the floor as a senior. The team co-captain scored more than 200 points and had more than 100 rebounds, steals and assists to finish a five-year varsity career that started as an Amherst eighth-grader with 679 points, 497 steals, 321 assists and 250 rebounds. Started all four seasons at O’Hara for coach and father Nick O’Neil. Likely headed to Vincennes University in Indiana to play a year of junior college.

Price shouldered much more of the offensive load for the Hillbillies after they graduated four key seniors, including two of the top three scorers, from last year’s state semifinalist team. Increased point total from 226 as a junior to 435 (67 3-pointers) and went from 78 rebounds to 156. Shot 72 percent from the free-throw line and 34 percent from beyond the arc. Averaged 20.7 points in six postseason games to help Fredonia repeat as sectional champs as a No. 5 seed. Scored 29 points and made seven 3s in regional loss.

Mahony played just about every position imaginable for the Legends, leading the team in every statistical category with 296 points, 213 rebounds, 93 steals, 76 assists and 15 blocks. A top two-way player in WNY, she finished second all-time in career scoring at Lancaster with 980 points in four seasons. As one of six seniors on the team, Team MVP last three seasons signed with NCCC. Mahony began this year’s Senior Night game on the bench so a teammate who doesn’t play often could start in her place.

The third-year point guard expanded her shooting range and played the best basketball of her career during South’s run to the state semifinals. Averaged 22 points over a three-game stretch to help the Billies win Class A-1, Class A (career-high 28 points vs. Amherst) and Far West Regional titles. Selected to the ECIC II and ECIC Large Schools first teams. The 65-47 regional win against Pittsford Mendon, which avenged a 23-point loss from the season-opener, is Dolan’s most memorable game of the season. Has a 94 GPA.