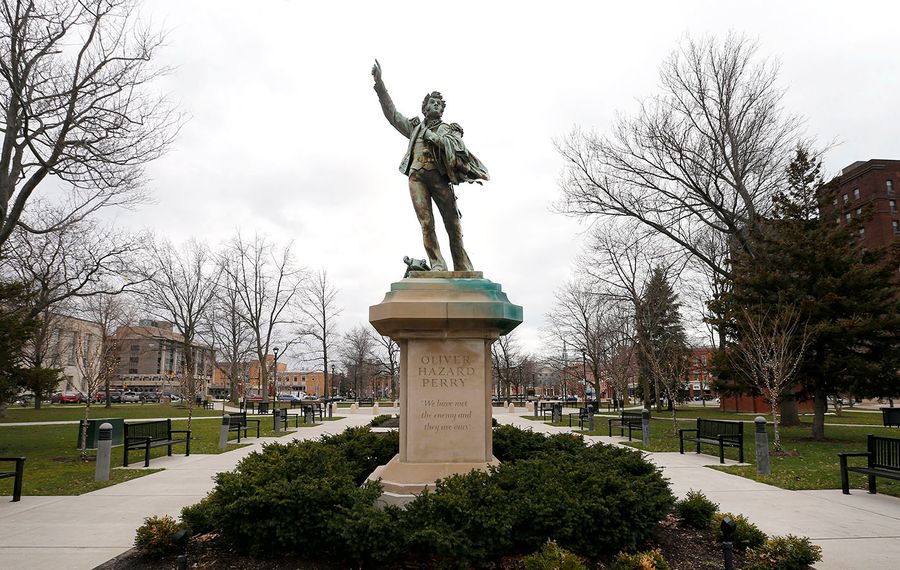 ERIE, Pa. – They played a minor league baseball game here on Thursday. The sun even peeked out a few times during the day.

That meant one thing: This Pennsylvania city seems bound to fall tenths of an inch shy of matching Buffalo's 199.4-inch seasonal snowfall record set during the infamous winter of 1976-77.

That is, unless the weather goes haywire in May. Snow-weary Erie residents don't discount that possibility.

Erie recorded 0.01 inch of precipitation as of Friday morning, and the chance of snow in coming days seems unlikely. Partly sunny skies are forecast the next several days, with temperatures increasing into the 50s next week.

So the record seems to be slipping from this city's glove-wearing grasp.

"It probably is," said Tony Ansuini, a meteorologist at the National Weather Service in Buffalo. "It's climatology. It's not saying that they won't get any more, but climatology is working against them. It's pretty late in the season."

For some, it comes as a disappointment.

"It's our last chance," said Ruth Swaney, who was bird watching at Presque Isle State Park.

But others didn't mind, because it meant avoiding more snow.

"I don't want the record," said Carrie Robinson, a park ranger at the Tom Ridge Environmental Center. "We're more than happy to not have more snow."

Then Robinson clarified her point.

Erie has only registered 1 inch or more snow after April 20 once in the last 30 years. It's only happened twice in the last 50 years, records show. 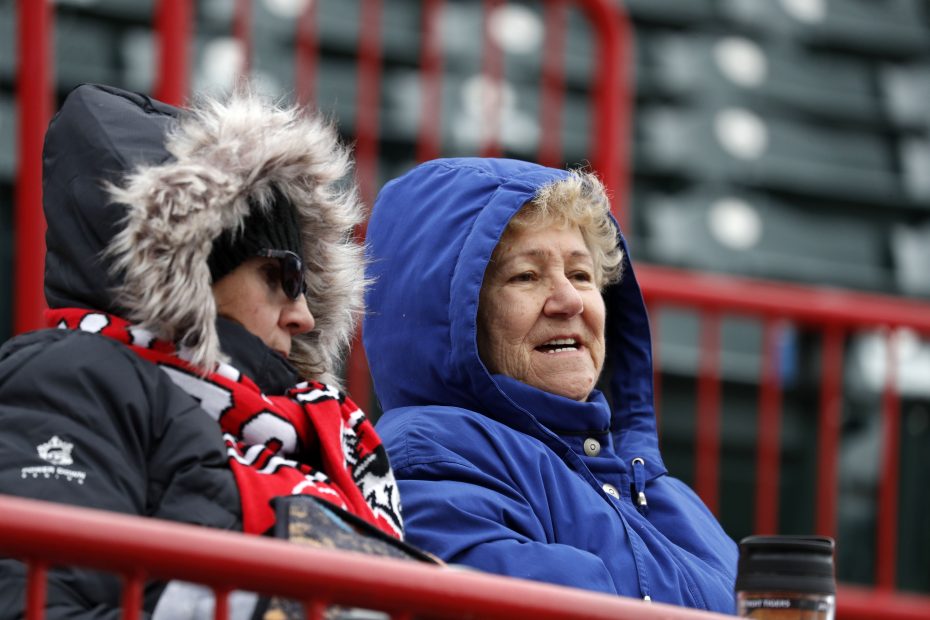 Ann Huber, left, and Carol Brown, both of Erie, watch the baseball game between the Erie Seawolves and the Trenton Thunder at Snowless UPMC Park in Erie, Pa., on April 19. (Mark Mulville/Buffalo News)

At the baseball game Thursday, Erie Seawolves season-ticket holders Ann Huber and Carol Brown considered just watching the game at UPMC Park a victory – never mind the score, a 4-2 loss – after the winter they endured.

"If they would have measured at my house, we would be record-setters," Brown said.

Brown lives in Erie's higher terrain, just south of Interstate 90. She estimates that as much as 300 inches fell at her house this winter.

There was so much snow in December that she almost canceled a Christmas gathering at her home.

Then the snow continued into January, February, March and even this month.

This week's snowfall drew Erie to within an inch of Buffalo in the record books, and the city is close to being the first American city with a population over 100,000 to record a seasonal snow total of 200 inches.

It also brought a lot of talk about the record. Erie residents were dialed in.

"We're hoping for 1.5 inches to get to 200 inches," said Michael Koncewicz of Erie, who volunteers at the Tom Ridge Environmental Center. 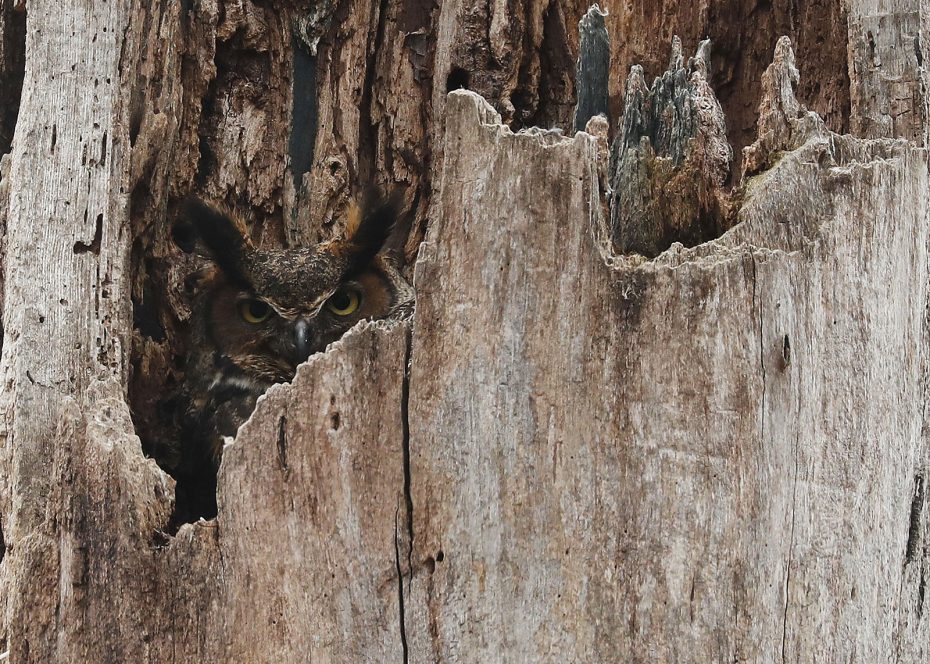 A great horned owl peeks from its nest in a tree at Presque Isle State Park. (Mark Mulville/Buffalo News)

For Huber, what Erie experienced this winter — including more than 120 inches of snow during December alone — makes them want to claim the title.

"We're this close," said Huber. "I don't really care one way or the other, but if it's this close, I'd like to see us break it."

Swaney and Sarah Larson, both of Erie, were bird watching Thursday at Presque Isle State Park, an ideal place to watch the spring migration.

"We are going to win it. We only need an inch," Swaney said.

"Everyone talks about it," Larson said. "This is our claim to fame. We are going to beat out Buffalo."

Memories of the winter that spawned the Blizzard of '77 instantly evoke strong memories of almost any Western New Yorker over 45 years old.

It was the storm that Paula Fuller of Springville pushed snow with the bumper of her car up Exit 57 on the New York State Thruway on the final yards of her trek through the storm from her then Cheektowaga home to Hamburg. Fuller was trying to drop her then 4-year-old daughter, Rosalyn, at a daycare at Leisure Land on Camp Road.

"The lights would dim because the snow would get onto the belt under the hood," Fuller remembered.

When Fuller got to the daycare, it was closed. Her father later drove from his North Buffalo home to Fuller's workplace in Hamburg to get Rosalyn.

For Mark Yetter, a volunteer at the Windom Fire Company in Orchard Park in 1977, the blizzard meant pulling motorists from their stranded cars on Abbott Road near Rich Stadium.

"I remembered the first time I got out of the truck, it was all white," Yetter said. "I thought I was going to die."

So, are they ready to give up the record?

"Erie can have the record," Yetter said.

Fuller and her daughter, now Rosalyn Haley, were together Friday afternoon at the Buffalo and Erie County Botanical Gardens.

"I think it makes no difference at all," said Fuller. "It's just nice to be sitting here in the warmth because it's so cold outside."

Local WGRZ-TV television meteorologist Patrick Hammer was among those who seemed to care the most about whether Buffalo stayed the snowfall king when the National Weather Service officially closes its books on the season, June 30.

Hammer took to social media to beat the band for Buffalo this week, rooting against more snow in Erie.

Why does it matter so much to him?

"If our city is going to have the distinction as a very snowy place, we might as well be the best at it, right?" Hammer told The News. "Who wants to be in second-place anyway?"