More than 15,000 women are diagnosed with breast cancer in New York state each year. Early detection, which comes with mammography, has whittled down the number of deaths in recent years to about 2,600 annually.

The news isn't quite as good in four Western New York counties where breast cancer screening rates are below average, primarily because women who are poor, underinsured or uninsured are less likely to get recommending testing.

It explains why Windsong Radiology Group rolled out a new Mobile Mammography Unit several weeks ago.

"If a screening system has traction and someone found to have cancer had prior mammograms, the likelihood that this cancer is an early cancer is very high," said Dr. Markus Holzhauer, a radiologist and director of mobile mammography at Windsong. "The cure rate of Stage I breast cancer is almost 100 percent. If it goes to a lymph node, it dramatically goes down. That's the whole premise of screening."

Windsong was among five health providers across the state to receive a three-year grant to buy an oversized mammography van and staff it. It was the only non-hospital provider funded by the state Department of Health and Health Research Inc.

The Williamsville-based radiology group has identified 130 potential locations it can serve this year, particularly in Allegany, Cattaraugus and Wyoming counties, as well as the city of Buffalo.

Health providers, clinics and community organizations interested in partnering with the mobile mammography team are asked to call 929-9494 or email jstasiak@windsongradiology.com. Upcoming screening dates and locations can be found online at windsongradiology.com/mobile.

Holzhauer, a native of Frankfort, Germany, attended medical school at the University at Kentucky and completed a breast imaging fellowship at Duke University. He and his family moved to Buffalo a decade ago.

Q: Why decide to take mammography on the road? 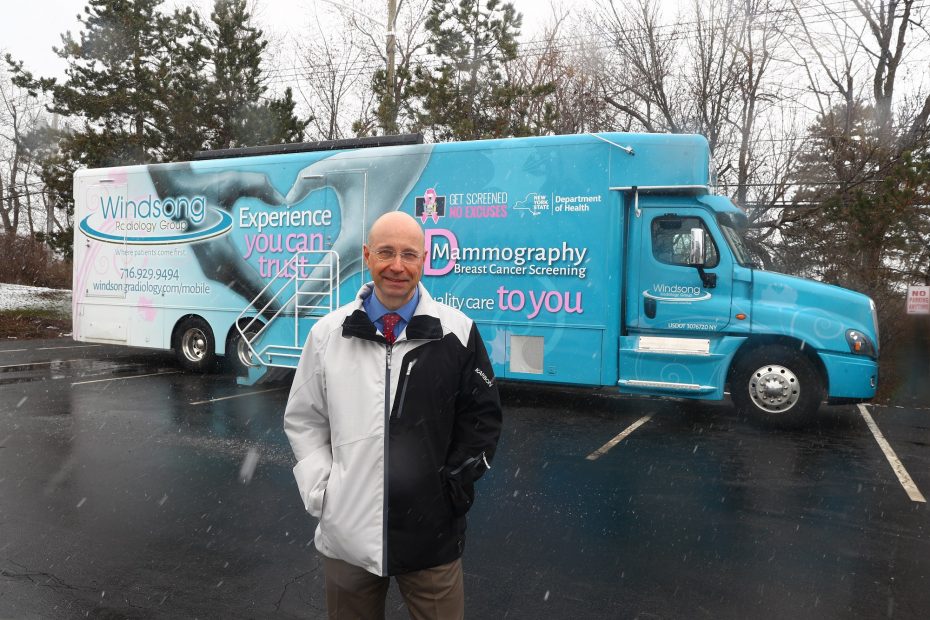 "The main thing to convey is that if you're getting recalled, it doesn't mean you have breast cancer. It's like the TSA guy in the airport patting you; it doesn't mean you're a terrorist," Dr. Markus Holzhauer says about additional testing sometimes needed after mammography. (John Hickey/Buffalo News)

A: This is not our core business model. We are the full-fledged, one-stop shop. The reason we decided eventually to do this – and I made the case for it – is that there is a great opportunity for outreach, to cover certain pockets of the population which don't have easy access to imaging facilities, and don't have the transportation or referring physicians.

Even though the bus has Windsong on it, at the end of the day it's a bus for New Yorkers, being paid by taxes. It's not a vehicle of competition to local hospitals or the other bus running around (the Erie County Medical Center Foundation mobile unit). The purpose is to deal with these pockets, so we like to collaborate with anybody out there.

Q: How will the mammograms differ from what is available in house in Williamsville?

A: It's a remote read. People get scanned, they leave the bus, and the mammogram is being read the next day or a day later at our center. Then the patient will be informed, as it is done in 98 percent of the nation. The fact that we read the scan when the patient is here in our building for the screening is an exception.

Those screened will get a phone call and letter, about 90 percent saying their mammogram was normal. About 10 percent will be recalled to come back to any center convenient for them to get a diagnostic workup.

Q: What is the cost? Insurance covered?

A: We take only patients who have a referral. We are responsible to follow through with all the potential consequences of a positive mammogram. Some people don't have insurance, so we work very closely with all sorts of local agencies and cancer services to hook them up to the medical system. Besides doing the screening, this is probably the biggest second task for us. It's also a link to the local medical community because we help them to recapture patients.

Insurance covers this and if they don't have insurance, we would help them with that need. …

Q: So if a woman finds something during a self-breast exam, or their doctor finds it, they should continue through the process with their doctor?

A: Yes, and they'll need to go to a local breast center not for screening but for a diagnostic workup.

Q: What will happen if there becomes a suspicion that a breast cancer has been detected?

A: The main thing to convey is that if you're getting recalled, it doesn't mean you have breast cancer. It's like the TSA guy in the airport patting you; it doesn't mean you're a terrorist. A recall happens in 10 percent of cases and only a small fraction of that results in a biopsy. Of that 10 percent – say for 100 out of 1,000 – only about 15 would end up getting a biopsy. The other 85 will be sent back to screening. Maybe some will be followed in six months. Even if you get a biopsy, it doesn't mean you have breast cancer; only three to five will have breast cancer. ... To find the three to five in the haystack, we need to go through this ritual. Otherwise, we could tell everyone they were normal and we would almost always be right – but we wouldn't find the cancers.

Q: Can you prevent being recalled?

A: One way to reduce the likelihood – and have to go through that period of uncertainty – is to be prepared with your prior images. Any old pictures can make the value of a new mammogram completely different. ... We may see no change over time. People should at least remember where their mammograms have been done before. You can bring reports to your screening if you have them.

Q: Who should get tested?

A: At Windsong, we recommend to start at age 40 if you're at average risk, and have a screening every year. If you have a mother or first-degree relative who had breast cancer, you can start 10 years earlier.