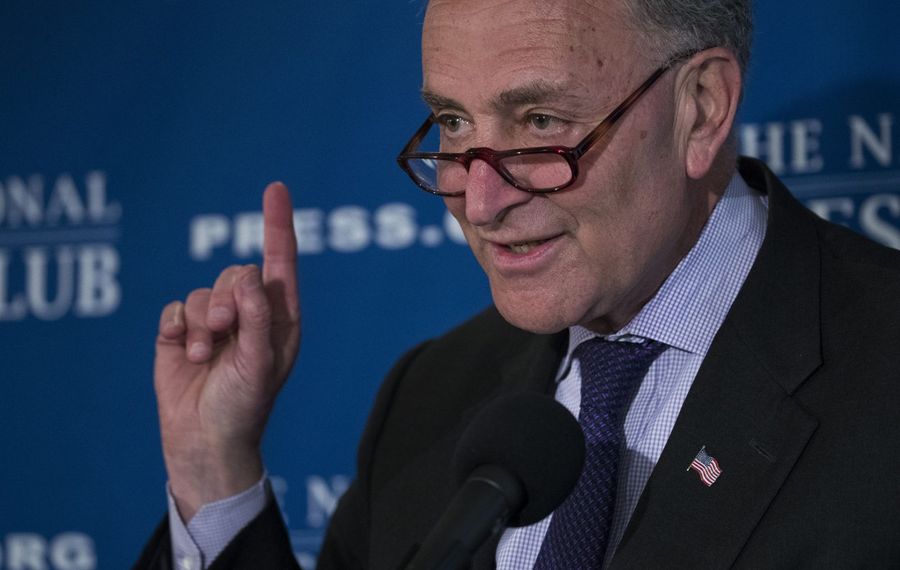 WASHINGTON – Senate Minority Leader Charles E. Schumer marked 4/20, the unofficial day to celebrate marijuana use and its culture, by saying he will introduce legislation that would decriminalize the drug on the federal level.

“Ultimately, it’s the right thing to do," Schumer said in an interview Thursday with Vice News. "Freedom. If smoking marijuana doesn’t hurt anybody else, why shouldn’t we allow people to do it and not make it criminal?”

Schumer, the nation's top elected Democrat, told Vice News that his office will release his comprehensive proposal to decriminalize pot within two weeks.

The legislation would remove marijuana from the Drug Enforcement Administration's list of controlled substances, provide money for research into marijuana's effects and set up a program to help fund minority and women-owned marijuana businesses.

Such a program would help counter the fact that 80 percent of the people in federal prisons for drug offenses, as well as 60 percent of those in state prison on drug crimes, are black or Latino, Schumer said on Twitter.

Schumer further detailed his proposal in an essay on Medium, saying: "A bipartisan group of Senators are already working to tackle sentencing and criminal justice reform so our drug laws catch up to the realities of the world we live in today. I hope my decriminalization plan will do the same."

In addition, Schumer's bill would “maintain federal authority to regulate marijuana advertising in the same way it does alcohol and tobacco,” making sure the ads don't target children, he told Vice.

The bill would still allow states to make marijuana illegal. But Schumer, New York's senior senator, said he would support legislation in his home state legalizing the drug.

“My personal view is legalization is just fine,” he told Vice. “The best thing to do is let each state decide on its own.”

Schumer's bill to legalize pot is unlikely to become law anytime soon. Republicans control the Senate, House and the White House, and few elected Republicans have backed such legislation in the past.

Still, Schumer's change of heart on the issue is significant. He would likely become Senate majority leader in the unlikely event that Democrats recapture that chamber this fall, which means he would then be in the position to push the legislation.

"With this announcement, Senator Schumer has effectively made it clear that a legislative priority for the Democratic Party is to end the federal prohibition of marijuana," Justin Strekal, the group's political director, said on its website. "As Democratic leader, it is his role to ensure that the caucus as a whole falls in line with this public policy position — a position that is held by more than 60 percent of Americans."

Meantime, a group called Smart Approaches to Marijuana held a news conference to argue that politicians such as Schumer should not rush to support the drug's legalization at a time when the nation is already in the midst of an unprecedented opioid epidemic. If recreational marijuana use is legalized, "a new addiction industry driven by profits will be putting more people in jeopardy," said former Rep. Patrick Kennedy, a Democrat and a recovering addict. "Our country loves to self-medicate, and now more than ever before."

Schumer's move aligns him with lawmakers to his left in the Senate Democratic caucus. Sen. Bernie Sanders of Vermont has long favored decriminalizing marijuana. And Sen. Cory Booker, a New Jersey Democrat and, like Sanders, a possible 2020 presidential candidate, recently introduced his own marijuana decriminalization bill.

The move also puts Schumer at odds with Gov. Andrew M. Cuomo, who has taken a more slow-going approach on the marijuana issue. Cuomo has directed the State Department of Health to do a comprehensive study on the potential effects of legalizing recreational marijuana use.

"I'm trying to depoliticize the issue and say let's get the facts," Cuomo said.

"We have to stop putting people in jail for something that white people do with impunity," Nixon said in a recent video.

Schumer's move could prove to be popular with younger voters, but he told Vice News that his bill was not about bolstering Democratic chances heading into the 2018 and 2020 elections.

"If we benefit, so be it," Schumer said. "But that's not my motivation."

The reason for decriminalizing pot, he said, is that it's simply the right thing to do.

“I’ve seen too many people’s lives ruined by the criminalization,” he said.

Schumer's life, obviously, isn't one of them. Asked by Vice News if he had ever smoked pot, the longtime lawmaker said no.

But perhaps there's a first time for everything. Asked if he would be willing to try marijuana, Schumer, 67, said:  “Maybe, I’m a little old, but who knows?”