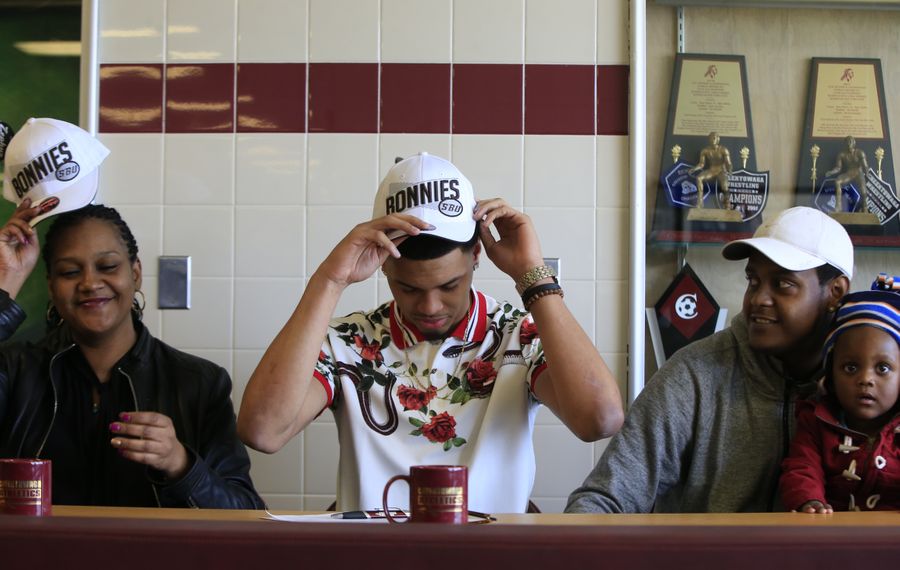 Friday proved to be a proud and emotional moment in the life of Dominick Welch.

The former Cheektowaga star and all-time boys basketball scoring leader in Western New York officially announced he will stay in the area as he accepted a Division I scholarship to play ball at St. Bonaventure.

Welch, the 2017 Allen Wilson Buffalo News Player of the Year, delivered the news before a gathering that included his family, past teachers, coaches, ex-teammates and other members of the Cheektowaga student body in the school's foyer.

"I just felt it was the right fit for me," said Welch as to why he picked Bona over Siena and Loyola Marymount. "They've been after me for two years ... I just felt most comfortable there. It's real close to home where my family and friends can come watch me. And I feel like it's going to put me in the best opportunity to make my dreams come true."

In Welch, the Bonnies get an athletic 6-foot-6 guard/forward that can shoot the three and drive to the basket, who could potentially step in and help out right away. Bona loses star guards Jaylen Adams and Matt Mobley to graduation. Both played vital roles in the Bonnies reaching the NCAA Tournament as an at-large team.

"Our expectation is that Dominick will be an integral part of our team immediately," Bona coach Mark Schmidt said. "He has a great shooting stroke, can score in lots of ways and loves to play fast. Like any good program, we always want to recruit the best players in our backyard, so to speak. This will be a home close to home for him.

"Dominick has matured physically and mentally this last year. … He's taken advantage of his prep year to improve in every way possible, and that's a credit to him and to the Spire coaches. He has a ton of potential and we're excited to get started working with him."

Welch starred for five seasons with Cheektowaga. During his time with the Warriors, he helped them break division title and Section VI title droughts.

However, Welch is best known for breaking perhaps the area's most hallowed record. He finished his career with 2,376 points to break the 27-year-old mark of 2,355 previously set by ex-Lockport DeSales and Burgard star Ritchie Campbell.

Welch broke the mark in his final scholastic game Feb. 28, 2017, a 45-point performance, in a Section VI Class A-2 semifinal contest before a standing-room-only crowd of more than 3,500 at Buffalo State Sports Arena.

Welch, an incredible leaper with a vast array of dunks in his arsenal, has spent this academic year at Spire Institute in Geneva, Ohio. It's mostly to get his academics in order so that he could meet NCAA qualifying standards and be able to take advantage of an opportunity many covet but is only attained by a few.

"He studied really hard for his ACT," Spire coach Dave Briski said. "He improved his score by 10 points which is almost unheard of. … The kid's work ethic is off the charts. When he wants something, he can get it done."

"I worked my tail off to get my grades where they were supposed to be," Welch said.

In addition to getting his grades in order, Welch posted solid numbers at the prep level against other Division I prospects. He averaged 19.0 points, 6.0 rebounds and 3.0 steals per game. He also shot a shade over 50 percent from the floor, including 39 percent from three-point range.

"You're going to see his stats translate I think over the next four years very, very well," Briski said.

The Niagara Purple Eagles announced they have added 6-1 guard Marcus Hammond of Bayside, N.Y. from Queens to its incoming recruiting class.

Hammond played for Benjamin N. Cardozo High School, leading the Judges to a 30-2 mark and the PSAL AA championship game. Hammond averaged 15 points, seven assists and five rebounds per game.  He shot 42 percent from beyond the arc.