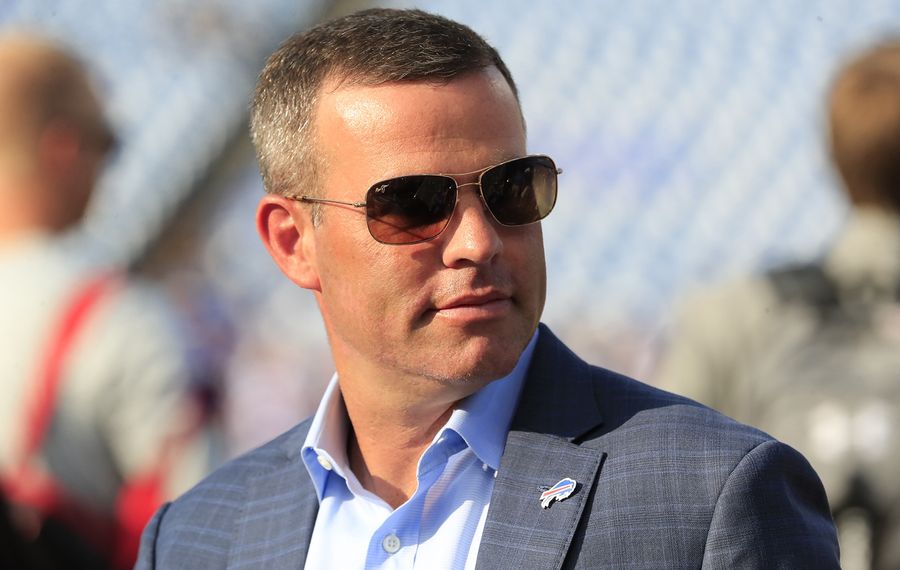 Editor's note: News Bills writers Jay Skurski and Vic Carucci have taken opposing views on the Bills' potential draft strategy. Here, Skurski argues that the time is now to sell the farm to get a franchise quarterback. Carucci argues the Bills have too many holes to fill to give up too much for a quarterback.

The Buffalo Bills haven’t come this far to turn back now.

The finish line for a plan more than a year in the making is in sight, but to get there, General Manager Brandon Beane needs to swing one more big, bold trade.

Simply put, Beane must move up the draft board to ensure his team can take a shot at landing a potential franchise quarterback. If that means selling the farm, say goodbye to the cows.

We all know the sordid history of the position in Buffalo since Jim Kelly retired in 1996. Seventeen players have started at least one game at the most important position on the field, from Todd Collins to Nathan Peterman. None has been right for the job.

It’s up to Beane to find the quarterback who will be. He might not ever get a better chance to do that than this year. As many as four quarterbacks could be selected in the top 10. Southern California’s Sam Darnold, UCLA’s Josh Rosen, Wyoming’s Josh Allen and Oklahoma’s Baker Mayfield all are viewed as having franchise potential. Heck, the perceived fifth quarterback – Louisville’s Lamar Jackson – has drawn favorable comparisons to Michael Vick.

Early projections of the 2019 quarterback class don’t show a similar crop of prospects, and even if it did, it’s time to stop kicking the can down the road when it comes to finding a quarterback.

The process of acquiring all those picks started almost exactly a year ago, when the Bills traded with Kansas City for a package that included the Chiefs’ first-round pick this year that turned into No. 22.

Beane was still in Carolina then, but after landing in Buffalo, he wasted little time building on that move.

Sammy Watkins and Ronald Darby were next to go, followed by Reggie Ragland and Marcell Dareus. Most recently, left tackle Cordy Glenn was sent to Cincinnati in a deal that saw the Bills jump to No. 12 from their original 21st pick. All those moves scream: “We’re moving up!”

Perhaps the Bills could stay at 12 and hope one of the draft’s “big four” slips, but why chance it? With the Cardinals at No. 15, the Ravens at No. 16 and even the big, bad Patriots at Nos. 23 and 31, there are too many teams with quarterback needs for the Bills to risk letting one of them jump ahead and spoil their plans. Beane should let every general manager picking ahead of him know to call him before accepting any trade, because the Bills are in a position to top any offer.

If there was one significant thing Beane said during his pre-draft press conference, it was this: “You’ve got to have a franchise quarterback.”

So the realization is there. This is an opportunity that doesn’t come along every year. It’s time to act on it.

Dueling draft strategies: Bills shouldn't get crazy to get a QB