Depew Police on Friday marked America's unofficial marijuana holiday of 4/20 with a Facebook post that could have confused even people who weren't stoned.

The post, published at 8:44 a.m., warned about "large quantities of extremely potent marijuana that has hit the streets."

"Allegedly, this marijuana is reported to be laced with toxic chemical that are extremely dangerous to the body," the post read.

The department said it was offering "free screenings for anyone wishing to have their stash checked for these toxic chemicals."

But before you come in to the police station with your weed, get it all together in one bag, police encouraged, in order to "make it much easier for our officers to test your product."

The post took off – within an about an hour it had been shared 258 times and had 45 comments.

But the item, which was copied from another source, was missing a line intended to make clear it was really just a joke, police said. 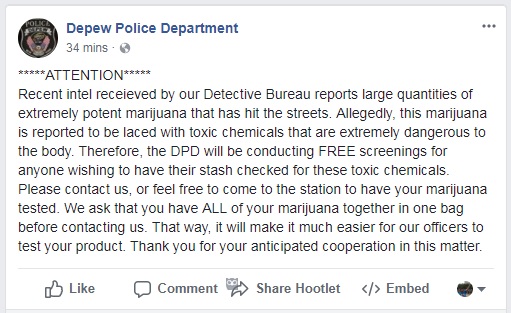 Police departments across the country in years past have marked 4/20 with comedic social media posts. Perhaps most famous is the Wyoming, Minn., Police, who posted a picture of a police officer holding a net waiting near a "trap" set with bags of snacks and video games.

Undercover #420 operations are in place. Discreet traps have been set up throughout the city today. #Happy420 pic.twitter.com/Jo8mh0Z5lQ

After receiving a call from The Buffalo News on Friday morning, Depew police said they planned to soon take down the post because it was an unclear attempt at humor.