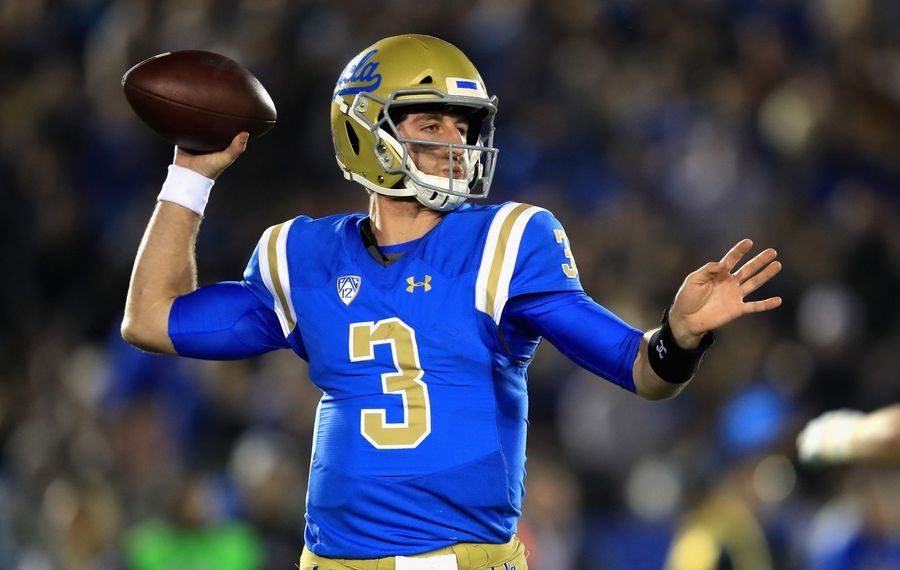 Here is a roundup of various mock drafts and scenarios for the Bills:

The Bills are best positioned among the QB-needy teams for a move up with two selections in the first and second round. ... He likely won't get out of the top 5, but seems to have the most potential for a slip based on the NFL's odd obsession with his outside interests.

His pick could be in the hands of another team if Buffalo makes a move up from 12 for quarterback help. The Bills need offensive line help stat, especially at center since 2017 starter Eric Wood was forced to retire because of a neck injury.

At 7 in trade with Tampa Bay: Josh Rosen, QB, UCLA

Why would the Bills trade ahead of a bunch of teams that aren’t taking a quarterback you ask? To keep another QB-needy team from doing it. They may not get the Colts to bite with Nelson still on the board, but the Bucs would likely be willing partners in this scenario. Rosen is the most polished, pro-ready passer in this class, making him a steal here.

At 4 in trade with Cleveland, Josh Rosen, QB, UCLA

I have the four top quarterbacks going off the board with the first four picks. The Bills make the move up with the Browns to land their quarterback.

There's a good chance the Bills will have to trade in front of Miami to ensure they land one of the top four signal-callers, but in this scenario, one of them falls right into their lap.

Vander Esch has the size, athleticism and versatility to be a playmaker in the Bills' front seven.

Some will consider this a reach, but it's never too early to grab a franchise quarterback, right? Rudolph is a blue-collar QB with the leadership skills, intangibles and solid overall game to flourish as a QB1 in a conservative offense.

The Bills need a shop wrecker between the tackles to create chaos at the point of attack. Hurst is a high-motor defender with exceptional hand skills and terrific body control.

At 9 in trade with San Francisco, Josh Rosen, QB, UCLA

Brandon Beane is looking at all options to deal up. This one won’t require giving up both his 1's.

The payoff for being patient in trading up is a guy who could be a 10-year cornerstone at one of two positions of need.

The Bills will do all they can to move up and select a quarterback, but what if they can’t? They lost two starting offensive linemen this offseason and need immediate help up front.

This is the contingency plan if the Bills can’t move up and draft one of the top three quarterbacks.

At 2 in trade with Giants, Sam Darnold, QB, USC

I don’t buy that Dave Gettleman has an aversion to trading down. Oh, sure, he never did it in Carolina, but Big Blue’s new boss man is sitting on a gold mine with Darnold still on the board. Some folks that matter in the Giants building aren’t in love with Darnold, so logic dictates that Gettleman use Buffalo’s quarterback desperation to his advantage. Grab the No. 12 and No. 22 picks along with one of the Bills’ two second-rounders this year (Nos. 53 or 56) and a 2019 second-rounder.

The Bills’ trade of starting left tackle Cordy Glenn to the Bengals is a thinly veiled plan to be in better position to take advantage of the talent in this year’s quarterback class with another trade into the top five possible, if not likely. After working with Tyrod Taylor and Cam Newton, defensive-minded head coach Sean McDermott might be more comfortable than most with a dual-threat quarterback like Mayfield operating the offense.

The Bills gained draft capital by trading away Cordy Glenn but do not currently appear to have the players on the roster to handle losing its best blocker. Like Glenn, Wynn stood out at left tackle at Georgia but has the build some feel is better suited for guard.

At 5 after trade with Denver, Josh Rosen, QB, UCLA

The Broncos move out of the quarterback sweepstakes after signing Case Keenum via free agency, and the Bills land one of the most pro ready quarterback prospects in this class. Buffalo moved on from Tyrod Taylor and likely covet a pocket-passer, which is where Rosen thrived at UCLA