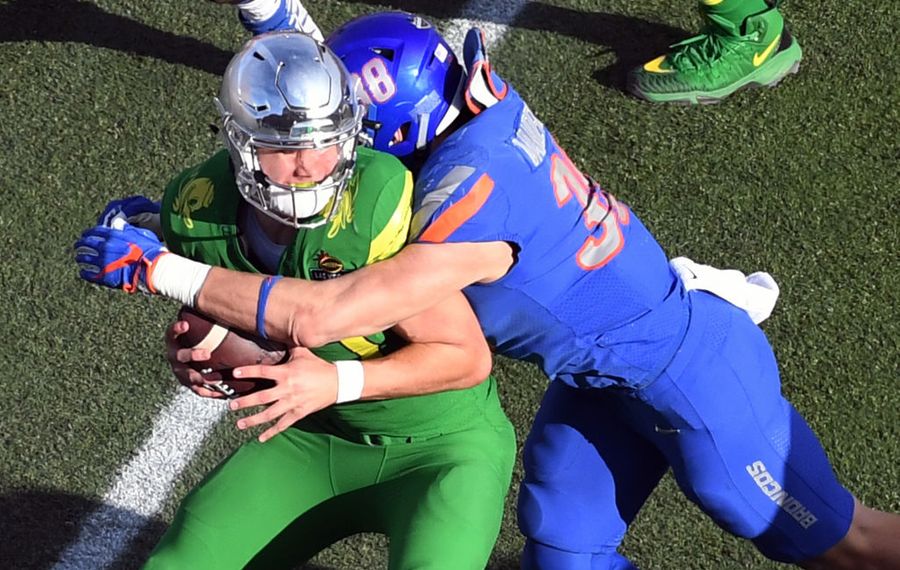 This is the ninth installment of a position-by-position preview of the 2018 NFL Draft. Previous installments were on running backs, wide receivers, tight ends, offensive tackles, interior offensive linemen, cornerbacks, safeties and outside linebackers.

Overview: The idea that linebacker isn’t a value position in today’s NFL will be put to the test next week. As many as four could go in the first round.

“I like the off-the-ball linebacker group – it’s one of the best ones we've seen in a while,” NFL Network draft analyst Daniel Jeremiah said.

That’s good news for linebacker-needy teams, like the Bills. Grade: B+.

The best: Roquan Smith, Georgia. Smith’s tape is “close to perfect,” according to ESPN analyst Louis Riddick. The Butkus Award winner in 2017 as the nation’s top linebacker as well as the SEC Defensive Player of the Year, Smith had 6.5 sacks and 14 tackles for loss in his junior season. Scouts say he’s a strong leader and smart player who has Pro Bowl potential.

“I feel like I can make a tremendous impact on the defense, just with my playmaking ability, my leadership qualities,” Smith said. “And everything that I possess, as a football player on and off the field. I feel like that will definitely elevate any defense.”

Bills view: You know it. The Bills know it. Everyone around the NFL knows it. Buffalo has a massive hole at middle linebacker.

“We do understand and do realize that Preston Brown was our starter all year and is not here,” Bills General Manager Brandon Beane said. “I get it; you’d love to come out of here with a guy you felt good with that can do that, but even if we don’t, I mentioned earlier, we don’t play meaningful football until September. We’ll find an answer.”

A look at the Bills’ pre-draft visitors shows that the draft is a place Beane is looking for that option. Smith, Boise State’s Leighton Vander Esch and Alabama’s Rashaan Evans, three of the top prospects at the position, have all visited Orchard Park. There is a decent chance Smith won’t even be on the board at No. 12 if the Bills keep that pick, while Vander Esch and Evans figure to be options for Buffalo at No. 22 – again, if the team doesn’t trade that pick.

Vander Esch models his game after Carolina’s Luke Kuechly – a player Bills coach Sean McDermott has plenty of familiarity with.

“I love watching him play,” Vander Esch said. “He’s a super athletic dude, just like I feel I am. I feel like he’s around the ball all the time. He pops off the film and it’s just tremendous to watch the amount of work that he does and gets done on the field. You can tell that dude prepares himself and knows what’s coming before the ball’s even snapped half the time. He’s calling out plays and doing this and that. It’s fun to watch guys like that.”

If Buffalo waits until the second or third round, Iowa’s Josey Jewell figures to be an option. Some scouts don’t value him that highly – his nfl.com scouting report gives him a fifth- or sixth-round grade – but the Bills showed last year when they drafted Matt Milano in the fifth round that draft rankings other than their own are meaningless.

From small town to big stage: Vander Esch grew up in Riggins, Idaho – population 419. He played eight-man football in high school, which he credits for helping his pursuit of the ball.

“You’ve gotta have a special talent to play eight-man football. You’ve gotta be a well-rounded player,” he said at the NFL Scouting Combine. “I mean, you’re playing both sides of the ball. Not that 11-man players don’t play both sides of the ball, but I think it definitely helps with the speed of the game and being able to open-field tackle. Those are important aspects of the game, and you’ve gotta be able to do everything. You gotta have dynamic players that can play everywhere.”

Vander Esch was a preferred walk-on at Boise State and redshirted in 2014. He struggled with injuries the next two years, but had a breakout 2017 season, finishing with 141 tackles – the most for the Broncos since 1998 – four sacks, four forced fumbles and three interceptions. He won the Mountain West Defensive Player of the Year.

His performance at the NFL Scouting Combine – where he ran a 4.65-second 40-yard dash and had a 39.5-inch vertical leap, solidified him as a first-round prospect.

“I feel like I cover the field really well,” Vander Esch said. “I’m always around the ball. I’m always going to put myself in position to be around the ball and be close to it. We took great pride in that at Boise State, being relentless finishers and making sure we always run to the ball.”

Injuries have knocked Cichy down the draft board. He missed all of 2017 with a knee injury, and his 2016 season was shut down because of a torn pectoral muscle after just seven starts. Before getting hurt, he had 60 tackles, including seven for losses, 1.5 sacks and two forced fumbles. He had 12 tackles against Michigan and 15 against Ohio State (3.5 for losses, as well), so he’s played some good football against top competition.

2. Leighton Vander Esch*, Boise State. 6-3, 240. His agent denies report that some teams are concerned about a neck injury.

3. Rashaan Evans, Alabama, 6-2, 232. Waited his turn before emerging as the leader of the Crimson Tide front seven.

9. Jason Cabinda, Penn State. 6-1, 243. Former high school running back who could get a look at fullback.