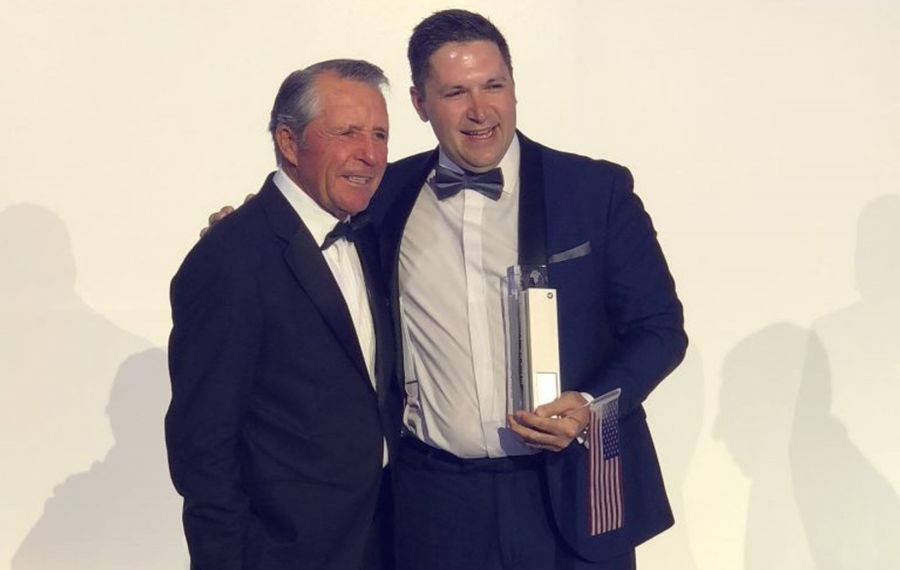 Sean Lindstrom had the thrill of his golfing life last month.

Lindstrom, a member at Wanakah Country Club, represented the United States at the BMW Golf Club International, which was held in South Africa. Lindstrom was one of 120 golfers from 40 countries to participate in the event.

“Outside of my kids being born and coming home from a deployment, it was some of the best days of my life,” the 34-year-old said.

Lindstrom played well, too. He won the low gross portion of the tournament – by eight shots. The 54-hole, Stableford-scoring event was held on the Montagu and Outeniqua golf courses at the Fancourt resort in George, a city in the Western Cape province of South Africa, halfway between Cape Town and Port Elizabeth.

Lindstrom, who works with the regional office of the U.S. Department of Veterans Affairs, shot rounds of 76, 74 and 75 in early March – not bad after having put the clubs away for winter in early November.

“A lot of the players I was going against came from warmer climates, where they had been playing, so I knew I needed to get up to speed as fast as possible,” he said.

In recent years Towne BMW has sponsored Wanakah’s Ganson Depew Memorial Invitational, giving the winners of that tournament to advance to the BMW World Cup U.S. Finals, which were held in October.

Lindstrom, a scratch golfer, opened with a round of 4-under 68 on Pinehurst No. 8, then followed that up with consecutive rounds of 74 on Pinehurst No. 2 to become the BMW U.S. champion and earn a trip to South Africa.

By finishing fifth overall and taking low gross honors, Lindstrom was able to meet and receive an award from Gary Player.

“I grew up idolizing players like Jack Nicklaus and Gary Player,” Lindstrom said. “I told my wife at the start of the week, ‘I’m going to play well enough to get a spot on that stage.’ ”

Golf, or more specifically caddying for golfers, has paid off in a big way for Luke Thompson.

The Williamsville North senior, who loops at Country Club of Buffalo, was recently awarded the Evans Scholarship, which provides full housing and tuition for a young caddie who meets four selection criteria: a strong caddie record; excellent academics; demonstrated financial need; and outstanding character. Thompson will attend Ohio State in the fall on the scholarship, which is valued at more than $100,000 over four years.

“I hope to one day be a successful executive in the business world,” Thompson said in a press release announcing the award. “Business and its ever-changing pace have always interested me. Experiencing college as an Evans Scholar with no debt upon graduation will be a great start to the rest of my life.”

There are currently 965 caddies enrolled in 19 universities across the country on Evans scholarships. More than 10,600 caddies have graduated as Evans scholars since the foundation was established in 1930 by Chicago amatue golfer Charles “Chick” Evans Jr.

“Luke has worked tirelessly to earn this life-changing opportunity,” said John Kaczkowski, Western Golf Association President and CEO. “He has shown excellence in the classroom and in his community, as well as on the golf course.”

Scholarship funds come mostly from contributions by 32,000 golfers across the country, who are members of the Evans Scholars Par Club program. Evans Scholars alumni donate more than $10 million annually, and all proceeds from the BMW Championship, the third of four PGA TOUR Playoff events in the PGA TOUR’s FedExCup competition, are donated to the Evans Scholars Foundation.

There will be a new event on the local golf calendar this year.

On May 19, 24 members of the South Park Golf Club will take on 24 members of the Cazenovia Golf Club for the inaugural “South Buffalo Cup.” The event, which will be held at South Park, will be held in four different handicap groupings: 0-6, 7-11, 12-17 and 18 and above. The front nine will be a two-man best ball and the back nine a singles match, with each match worth one point. With a total of 36 points available, the team that claims at least 18.5 will win the Cup.

There is a nice symmetry developing between some of the top events on the local golf circuit. Last year, the International Junior Masters and Porter Cup debuted an automatic exemption into the field of the latter for the winner of the former. Staring this year, the Porter Cup winner will be given an exemption into the field for the LECOM Health Challenge, the Web.com Tour event held at Peek’n Peak in Clymer. That means last year’s Porter Cup winner, Brandon Chu, will have a spot in the field.

Volunteers are needed for the LECOM, which will be held July 2-8. Jobs include scoring, marshalling and transporting players. Junior volunteers from ages 13 to 17 are also needed to carry scoreboards with the playing groups.

An adult volunteer package costs $35 and includes a shirt, hat, three weekly tickets for a guest, parking and food and drinks during the shift. Those who work three or more shifts during the week receive either a round of golf on the upper course or an admission pass to Splash Lagoon Indoor Water Park in Erie, Pa.

More information for those interested is available at lecomhealthchallenge.com/volunteer.

Turning Stone in Verona was recently named one of the top five golf resorts in the Northeast/New England region by Golf Digest in the publication’s May edition.