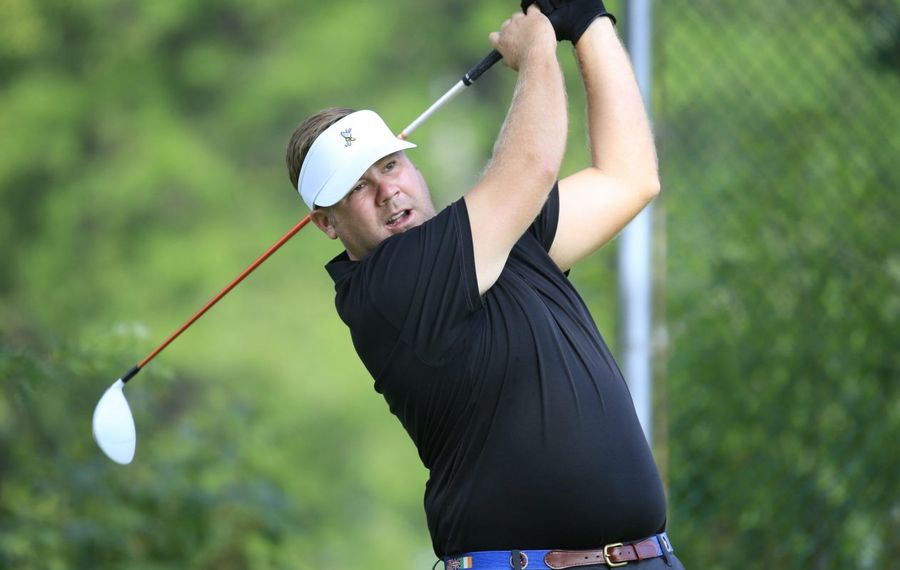 This is the time of year when Jamie Miller's phone begins to ring off the hook – if the terminology applies to cellphones.

Miller is one of the top golfers in the Buffalo area. He played at Augusta State, and he played the minor pro circuit for several years before regaining his amateur status. Miller is now a financial adviser at Morgan Stanley.

So when a friend, or some barely remembered acquaintance, needs to round out a foursome in a scramble, he's the guy they call.

"I'm a scramble whore," Miller joked. "I'm actually trying to tone it down this year and only play certain ones. From my perspective, it's all about charities. I'm on the Children's Hospital committee. So it's really about wanting to get more involved in the community. But I do play in a lot."

The scramble is the format of choice for most friendly golf tournaments, be it a major charity like the Jim Kelly event or a small neighborhood tradition.

"It's very rare with an outside event where they tell me they don't want to play a scramble," said Josh Wojtaszczyk, golf director at Diamond Hawk in Cheektowaga, which hosts about 40 major scrambles during the season.

"Primarily, it's location," Wojtaszczyk said. "Most companies we deal with are from the city, so it's a pretty straight shot down the 33. Most players can get here in 15-20 minutes."

Scrambles are fun and often raise money for a worthy cause. It's simple, though there are as many variations as there are brands of golf balls. Typically, you have four-person teams. Each person hits a shot. You determine whose shot is best and everyone hits from there, until you putt the ball in the hole.

But scrambles are also competitions. Whenever they're keeping score, things can become rather intense. That's why Miller gets all those phone calls. It's nice to have a ringer who can bomb it off the tee and make all the shots.

Golf Preview: 'You play like a girl' is the ultimate compliment

"They try to convince you it's good for you to meet these people for work," Miller said. "Clearly, it's just because they want to win. Generally speaking, they're gunning for someone. There's someobdy that's won it a bunch of years in a row, or maybe one of their buddies has a stacked team.

"I like to think I'm just a good time," he said with a laugh. "It's not all about the golf. It may be my ability to drink on the golf course."

Now that you mention it, there is a drinking element to scrambles. I get invited to quite a few, and I'm long in the tooth, not long off the tee. A lot of people are in it for the revelry. But there's no escaping the fact that some golfers take them very seriously.

"Sometimes, I like to be Mr. Serious about golf," said Brian Koziol, who hosts the Tee 2 Green Hour on WGR radio with Kevin Sylvester and Jeff Mietus on Saturday mornings. "I have to understand that if I'm in a scramble to just take a deep breath and enjoy the day and understand the score doesn't really matter."

But once the juices start flowing, it's hard not to think about walking up at the tourney dinner to get a trophy for finishing first at 21-under par. Just be ready to be booed all the way to the dais. This pains me as a lover of golf, the most honorable of games. But everyone assumes you cheated to finish that low.

"That's my biggest pet peeve in any tournament," Koziol said, "that I never feel like you get the most legitimate scores. I'll steal a great line from (WGR's) Jeremy White: 'You always want to finish second in a scramble. Everyone thinks the first guys cheated.' The honorable spot to finish in a scramble is second."

Is this such a surprise? Men think nothing of giving each other a 5-foot gimme during a regular round of golf. I say men because women scoff at the practice.

"I've grown up in that world," said LPGA teacher Marlene Davis. "They get liberties, let's put it that way."

The liberties flow like the beer at most scrambles. They sell mulligans to raise money for charity, or strings that turn a missed putt into a birdie if it's within a string's length of the cup.

So when you combine a loose, charitable atmosphere with alcohol, it's a recipe for bending the rules.

Not putting out is a common violation. If there's 5 feet left after all four guys have putted, so what? Why hold up the course. That's good. Oh, and when you've purchased all those mulligans, who can keep count after a long day?

Last year, a couple of guys nearly came to blows in the drink line after a scramble. One of the players from our team berated a guy from the group behind us for not putting out all the short ones. They were related, too.

Then there's the club length rule. Most scrambles allow a club's length or two to give you a clearer shot from a tough lie. Of course, a "club length" is open to interpretation. I've seen clubs extend from the woods to the fairway. Some take the length of an actual clubhouse.

"Oh, it's incredible what people do," said Miller, who has won a few times at the Jim Kelly event. "It's that important."

Here's a popular way of bending the rules: Two balls are on the green, a similar distance from the hole, and the team hasn't decided which one to use. A player goes up to his ball and casually hits it at the hole. If it goes in, that's the putt you wanted. If not, you meant the other one.

"That's the one you see a lot," Miller said.

Cheating aside, there's a lot to like about scrambles. Playing golf for a good cause sure beats work. It's fun to get your squad together and strategize. It's nice to have a big hitter or two, but there's a lot to be said for skilled players who can putt and stick the approaches close.

I play in eight-man scrambles on my golf trip at Cross Creek (the rangers permitting) and you'd be amazed how hard it is for even one of eight players to hit it close from, say, 125 yards.

"People say you want the big hitter, but that's the least important thing in my opinion," said Koziol. "At least if you have four guys pretty equal in ability. The approach shot is huge. That gives you the chance to make the big putts."

Koziol doesn't believe a hitting rotation is important. He says if a player makes a great shot, he should have the option of hitting the next one. But he agrees your best putter should go last, so he can see the line. I'm usually the guinea pig who goes first. At least you get to putt on every hole.

Scrambles can be discouraging for duffers like me. If you have good teammates, you feel irrelevant at times. Your best drives aren't good enough, which is why it's nice to require that everyone's drive be used a certain number of times.

Shots that would lead to bogeys and help me shoot 90 aren't satisfying in a scramble. You try risky shots that wouldn't be smart in your normal game.

Tim Fries, a top local pro who recently bought Glen Oak, agreed that scrambles can be tough for lesser players. He wants golf to be fun for all ages and skill levels. He's been at the forefront of the Tee it Forward movement, which encourages players to play shorter tees based on ability.

Fries said there are more creative ways to run scrambles. He likes the "step aside" format, where the person with the best drive steps aside until his group hits the green. He also prefers an automatic two-putt system.

"Golf takes too long," he said. "You miss the first one and you pick it up."

Koziol and Fries both prefer a two-man scramble to a four-man, because it makes each player's shots a lot more relevant.

"My favorite scramble format is a two-man," Koziol said. "There's only two chances and you feel more invested in the round. And there's a different group within your foursome. So you have the other two keeping an eye on you to make sure there isn't any cheating going on."

All right, so guys bend the rules a little and have a few pops on the course. Who am I to judge? Scrambles are some of the best days of the summer. It's Buffalo. I had to scrape ice off my windshield in the second week of April. Anyone who golfs around here deserves to be cut a little slack.

Miller said one of the reasons he plays scrambles is for the competition. He's still active in amateur golf, playing in a lot of the USGA's events. He and Jim Smith will compete in the USGA Four-Ball in Florida in late May.

"I love to compete and I love to play," Miller said. "It's what I do. I'll be honest. If I didn't play tournaments, I don't know if I would play. It wouldn't be fun for me. Tournament golf is what it's about for me."