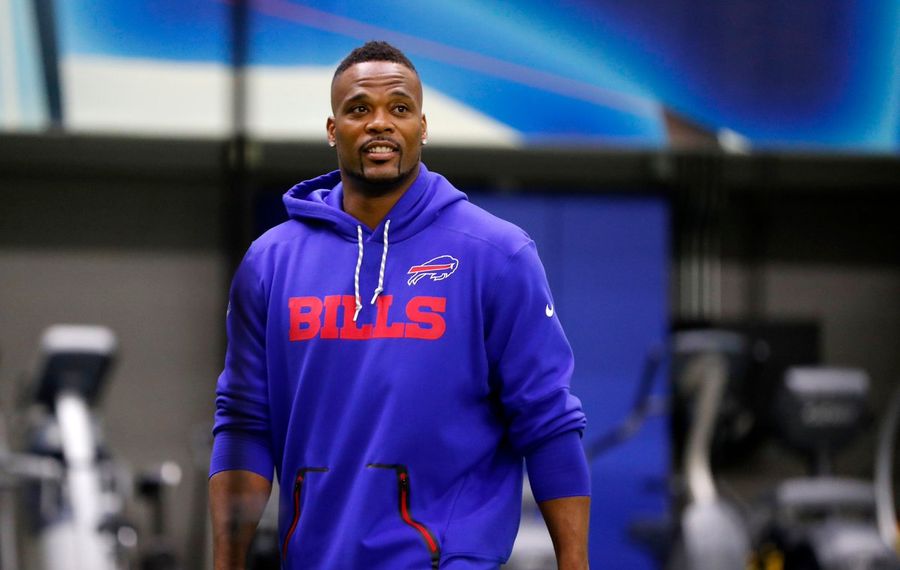 Fred Jackson knows that he remains a fan-favorite player in Buffalo. But even he couldn't believe the response when it was revealed that he would sign a one-day contract with the Bills to officially retire as a member of the franchise.

Jackson has no obligations to the team under the contract, which was mostly ceremonial. He ranks third in Bills history with 5,646 rushing yards and eighth in scoring among non-kickers. Only 59 players have suited up for more games than Jackson's 106 as a Bill. His career rushing average of 4.4 yards per carry is tied for 51st in NFL history (750 carries needed to qualify).

Jackson was asked if he feels his career will someday land him on the Bills' Wall of Fame.

"That was the goal when I was playing," Jackson said. "I don’t know, I can just hope. I can see what happens. It’s not up to me but I would love to be up there."

Jackson also took time Wednesday to reflect on prominent moments and teammates in his career, and shared a classic Marshawn Lynch story.

Here are memories Jackson shared with The News, in chronological order:

His first training camp (2006): "Scary. Because I didn’t really do much. I remember sitting up at night and watching, when they come by to do cuts, I see feet walking through the hall and I was like, 'please don’t knock on my door.' That was the No. 1 reason I said scary because I remember that moment."

His first game (2007): "Again, it was nerve-wracking because I played at Division III. I didn’t play in front of 70,000 people on a regular basis. To go out there and have everybody’s eyes on you, I was nervous. I wanted to make a play. I kind of just used that nervous energy to motivate me. I said, 'I’m going to hit this guy with every ounce of nervous energy in my body and see if he folds from it,' and I was able to sustain some good plays out of it and make a 10-year career out of it."

The infamous 8-0 snow game against the Browns (2007): "I was confused, I was like, 'what is going on right now? We’re not supposed to be on the football field right now.'"

"The Leodis McKelvin fumble game" against Patriots (2009): "Heartbroken. That was a game I felt we had played really well as a team, so to lose it in that fashion, I was heartbroken."

When the Bills drafted running back C.J. Spiller (2010): "I talked to C.J. yesterday. Obviously it’s a business and they’re going to make moves like that but C.J. became a great friend. When he heard I was announcing my retirement today he was one of the first people to reach out to me. You become brothers. The thing about C.J. and I is C.J. made me a better player because having a guy like that on your team and competing with him every day brings out the best in you."

The 2011 game when the Bills beat the Patriots for the first time since 2003: "Ecstatic. I knew what that meant to everybody that was in the stands. Even after the game, we walked into the locker room and then back out to the stadium and there still had to be 25,000, 30,000 fans out there screaming."

The way he was cut from the team (2015): "I was disappointed. I felt like it wouldn’t have been just one of those things where I came in on a Monday morning and got cut. I felt like after having the conversations that I had with Doug (Whaley, the GM), I felt like it would’ve been more of us having a conversation saying 'look, you need to really do some things to earn a spot.' Because I went to him and asked him that – ‘I got a bad hamstring right now, do I need to be out here fighting for my spot?’ And he was like, ‘No you’re fine.’ When it was the complete opposite, I was dumbfounded."

His first playoff appearance with Seattle (2015): "Again, I was ecstatic. We play this game to have an opportunity to win championships and that was the first time I had a chance to go out and chase a championship. Unfortunately we didn’t get it but I was still happy to have that opportunity."

When the Bills finally ended the drought: "One of the guys I was pulling for the hardest was Kyle Williams. He was upstairs with me when I was signing the (one-day contract). I couldn’t have been more happy for him as a player and more happy for the fanbase. … I was watching it just like everybody else. I wanted to see what happened. After they won their game I clicked over to see what happened in the other game and then I had one TV on the Bills in the locker room and when they scored the touchdown to win and it got the Bills in the playoffs, I was running around the house and my son was doing the same thing. We’re still huge Bills fans. This is still family for us. We were just as ecstatic as everybody else."

On Marshawn Lynch: "Love him. He’s like a little brother to me. I actually just talked to him before I came in here. Great dude, always pulling pranks on people."

Everyone has a Marshawn story, what’s yours? "Man, I remember Marshawn had just come to my house and Braeden, my son, was eating a cookie. And he took Braeden’s cookie like as a joke and said, ‘I’m going to eat it.’ And he actually started eating the cookie! I was like, you can’t do that to a 2-year-old! You have to do it as a joke. But he literally took my son’s cookie and ate it." (Follow up: It was a chocolate chip cookie, homemade.)

On Brian Moorman: "Just a dude that gave everything he could to the community. He was a guy who set the example of what we needed to be as Bills players in the community. I appreciate him for that."

On Stevie Johnson: "A guy that was always having fun. I love to watch Stevie on the football field. He was always entertaining. One of the things about Stevie was, not only was he a good football player, he was a great entertainer."

On Ryan Fitzpatrick: "One of the most underrated funniest people you’ll ever be around. We all know how smart he is, and I used to give him so much crap. I used to tell him, ‘man, why are you so smart?’ He was like, ‘you know what, I’m the second-smartest person in my house so don’t worry about it.’ Just stuff like that, being around Fitz he always had some clever comeback. He was probably the second-biggest prankster that I was around."

Other favorite teammates: "Bryan Scott. He spent the most time at my house when I was in Buffalo. He was definitely a brother. I talked to him, he was one of the ones that called me and said congratulations. Aaron Williams, little brother. He spent the second-most amount of time at my house. Those two guys and C.J. Spiller was another person I have a great relationship with. Again, like a little brother to me."

On if his sons will be allowed to play football: "My sons will play football. It was one of those things that, I know how much joy it brought me. He gets the same enjoyment out of it the way he talks about it, the way he loves doing it. There’s no way I can rob him of that. Of course I’m going to be on pins and needles when he takes a big hit, hoping he gets up and not having to worry about long-term effects, but I can’t keep him from playing football."